Ok, time to finally post about my 21st birthday.  I know, it’s actually been several weeks since I did the beginning of my trip, but since then school has started and I’ve been dragged into having real responsibilities, like homework and work and applying to jobs.  So here it goes.

On Monday morning, Christine arrived to a rainy Paris.  After she took a quick nap and I ran an errand, we headed out to the Louvre for a little culture.  The line was long, but we waited it out and then wandered through the halls aimlessly and saw some cool statues, beautiful furniture and jewels, and some French artwork.  Some of the places I remembered going the last time I was there, although the Louvre is so huge I’m confident that we wandered to some new places as well.  We headed over to Opera Garnier once we’d had our fill of art, and then stopped by Galleries Lafayette to marvel at the designer clothing. 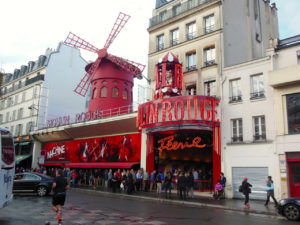 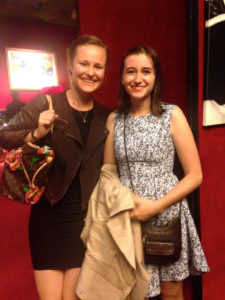 At that point, it was getting close to dinner time.  For my birthday present, Christine had surprised me with tickets to the Moulin Rouge!  We had dinner with champagne, which was lovely, and then watched the show, which was unlike anything I’d seen before.  Partially because it was topless, but it also had some pretty crazy acts.  There was the rollerskating couple that did the kinds of lifts that you see in ice skating, but they were just twirling in a circle on a raised platform.  And there were acrobats who had incredible strength.  The man lifted the woman above his head and then got all the way down to a laying position, keeping her above his head the entire time.  The dancers did the can can, a woman danced in water with some boa constrictors, and they brought ponies out onto stage.  There were black lights, feathers, light up costumes, and giant headpieces.  It was a cool experience. 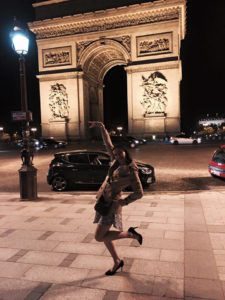 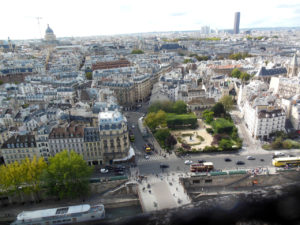 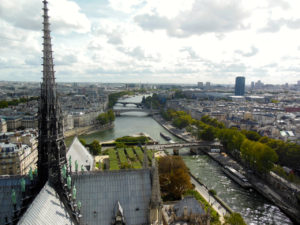 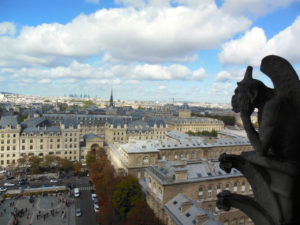 The next morning, we started with one of my goals, and climbed Notre Dame.  Which is a lot of stairs.  The view is incredible, though.  Totally worth it.  The gargoyles were a lot creepier than they seem in the Disney animated version, by the way.  A lot of them were eating small animals. 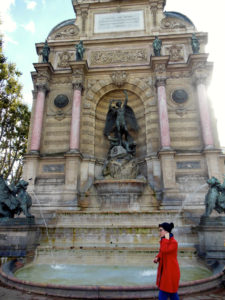 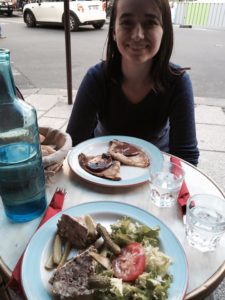 From there, we walked around and took in Paris.  We went to Le Marais, where I got my gift from my parents- a ring with my birthstone- and we wandered into an exhibit on Paris Fashion Week.  Then we headed across the Seine to the Latin Quarter.  The theme of the afternoon was to feel parisienne, which I think we accomplished.  The Latin Quarter is the epitome of Paris to me, with the cafés and bookstores, the boxy shops along the Seine, and that fountain when you get off the metro near Odéon.  I actually remembered my way around this time, and took us to the place where I had eaten crepes nearly ten months before since it’s reasonably priced and delicious.  We also got ice cream and enjoyed the relaxed atmosphere for a while.  From there, we went to one of the other places I remember as feeling Parisian, which is the Jardin de Tuileries.  It didn’t disappoint.  The whole day was perfect.  It captured the essence of the city, with the café culture and magic of Paris.  As the sun set, we found our way back to the metro and headed back to the apartment.  Both of us had to pack, since I was leaving for the US and Christine was heading to a hotel the next day.  Although I wanted the trip to last forever, I’m so glad that Christine joined me for my last two days.  I still don’t quite believe that I got to spend my 21st birthday in Paris with such an amazing friend!