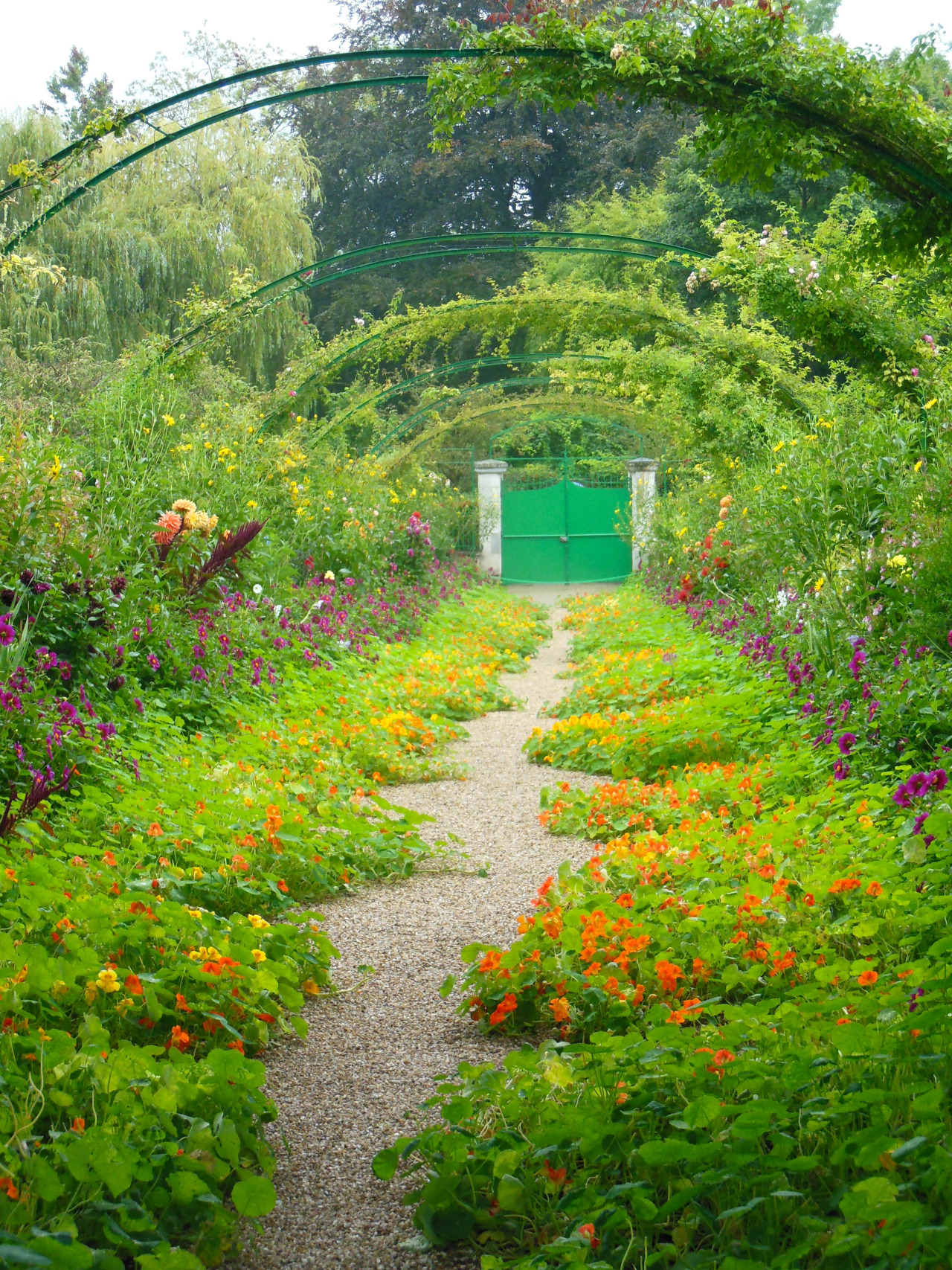 Paris is special enough that it deserves two posts.

Here’s the thing about Paris: everyone romanticizes it.  You watch Midnight in Paris, for example, and see the city devoid of people, with tranquil, clean streets where everything is in its place.  And certainly, before I visited, that was my view as well.  It’s not quiet, though.  It’s a proper city, with noise and dirt and crowds of people moving rapidly through the metro and cars that honk all the time.  And I think if Paris was exactly like my romanticized imagination, I wouldn’t like it very much.  I love that it’s alive, bustling with movement and culture and even tourists.  It’s that atmosphere that draws me in and makes me want to keep returning.  Paris is the perfect blend of romantic beauty and realism, livable and yet still mysterious.

For those of you who have been following me for the past year, you may remember that I’ve already traveled to Paris, last November (x), and loved it.  This was the first trip I booked after the initial details for Strasbourg were taken care of.  Due to the timing of the quarter system, I arranged to spend my 21st birthday in Paris.  While I originally thought I would be alone, my oldest and very dear friend Christine arranged to fly in on my birthday, so I’m splitting these posts into my time before and after she arrived.

I arrived Friday afternoon by TGV and quickly made my way to my Airbnb, which was adorable but made me feel terribly out of shape with its seven flights of stairs.  I had done some research on reasonably priced shops in Paris since I had a lot of shopping to do for family Christmas presents, which led me to the 6th and then into the Latin Quarter.  I stopped by Shakespeare and Company, walked along the Seine, stopped in Notre Dame, and got a cinnamon crepe.  I ended up in Le Marais for the first time and went grocery shopping on my way back to the apartment.  It was so strange to see some of the places I had visited last November.  They looked the exact same but so much has changed in my life.  This time, I didn’t get lost in the Latin Quarter, and I even managed to find my old hotel… nice to know that mental map took 10 months to develop. 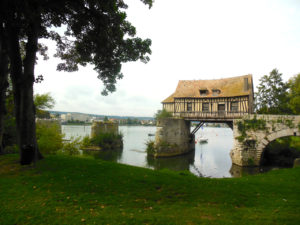 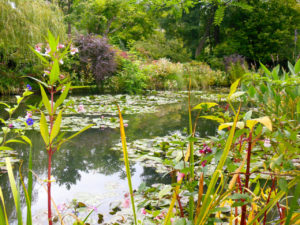 Saturday was a day trip out of the city!  Back when I visited Berlin, I took a bike tour with Fat Tire, so I had checked out their Parisian tours and found one to Giverny.  We all met up at the train station, and of course it started raining.  I apparently don’t have great luck when it comes to bike tour weather.  Our group ended up being me and nine Australians.  We all took the train to Vernon, where we went to a market and shopped around.  I wish the US had bakeries the way France does.  After we had all gotten our provisions for lunch, we headed to a picnic spot by the river.  It was gorgeous, and as I ate my bread and cheese and strawberries, our guide explained how impressionists were the punk rockers of the art world.  Although I’ve already learned about impressionism through DIS, I found the information about how art has evolved from these paintings very interesting.  For the first time, I actually saw something in a Jackson Pollock painting beyond meaningless paint splatters, so that has to count for something! 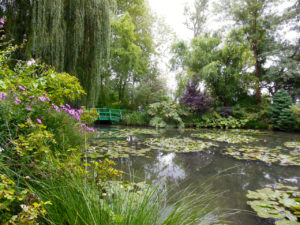 From there, we biked out to Giverny, which is a tiny town that seems to only have bed & breakfasts, art galleries, and one token café.  We headed to Monet’s garden, which was stunning.  I think if I lived somewhere like that, I’d take up painting!  It was split into two parts, the water lily area that contained the Japanese bridge and plants growing freely, and the area near the house with neat rows of flowers organized by their colors.  When it started raining, we headed into the house.  His studio was the best part of that because they had recreations of many of his pieces on the walls.  After we were all done in the gardens, we visited his tomb and then headed back to Vernon to catch the train.  During the course of the day, I had befriended an Australian family and they invited me to dinner with them, so we found a place near the train station between our two apartments.  It was great to have an intellectual discussion about our cultural differences; we talked about politics, education, art, and how our countries handled their indigenous people.  I learned a lot about Australia (which is still on my list of places to go!)

The next day, I left the apartment relatively early and went to a flea market, Marche aux Puces de la Porte de Vanves.  Side note, I’m terrible at restraining myself from buying breakable things… but I was pretty productive and got a lot of Christmas shopping done!  It was a nice little market, with a good variety of objects and decent prices.  Personally, if I lived somewhere that had markets like that, I’d never buy a regular dish again when I could get something beautiful. 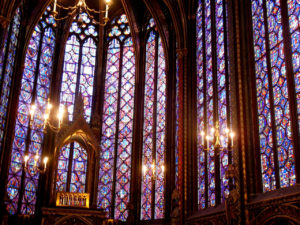 I stopped back at the apartment to drop everything off and then I headed out again.  I finally walked around the two islands, starting with Île Saint Louis and then crossing the bridge toward Notre Dame.  I ended up finding Saint Chapelle, which I had read about due to its stained glass.  As anyone who reads this blog knows, I love stained glass, so I figured I should check it out.  After waiting in a very long line, I made my way up the stairs into the high tower.  Wow.  It was AMAZING.  Truly beautiful, and well worth the wait and the cost to get in.  As much as I would have loved to just sit in the stained glass room all day, my time in Paris was unfortunately limited and I had other places I wanted to go! 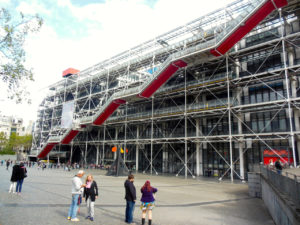 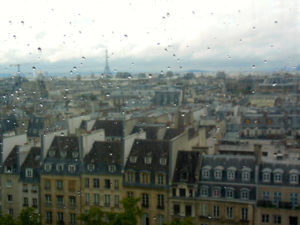 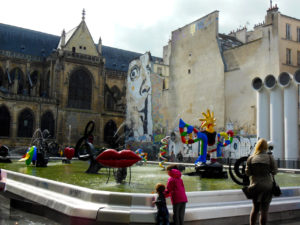 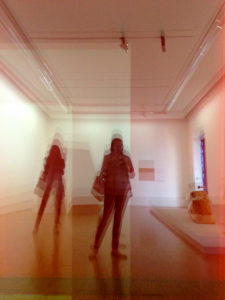 So I headed off to Centre Pompidou, the modern art museum in Paris.  I remember learning about the architecture in high school, about how they wanted to take the parts of the building that are supposed to be on the inside and put them on the outside.  The views from the top are pretty great, with views all around Paris.  I spent a long time wandering around the various pieces, trying to see what caught my eye.  A few I liked:  the strange reflective red glass, the three dimensional mirror, the teal stained glass piece, the dark carpeted room with a loop of rain sounds in the background, furniture aesthetic of the 80s.  The works that made me think the most were a series of pieces by a photographer dealing with the uncanny valley, where she would take mannequins and manipulate them to look realistic, and make models and celebrities and turn their photos doll-like; through the pieces she considered what makes people alive.  Creepy, certainly, but also intriguing.  After a meal at the café, I headed back to the apartment to repack and skype my parents, because the next day was my 21st birthday!

I’ll talk about that on another post, though.  À bientôt!