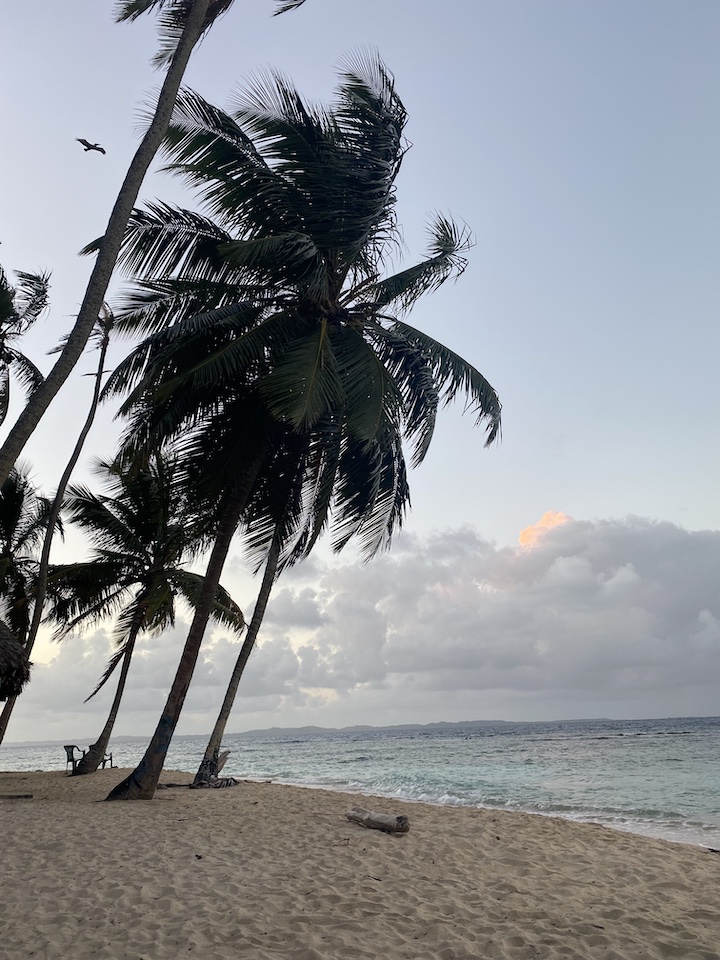 It’s pretty much impossible to imagine a place more idyllic than the San Blas Islands in Panama. We had one weekend in Panama where we could get out of the city and do something cool, and as soon as I read about these Islands, I knew that’s what I wanted to do. They’re an archipelago on the Caribbean side of Panama, and they’re in a semi-autonomous region that’s run by indigenous people of Panama.

We did a two night tour, so San Blas Dreams handled the logistics for us! They picked us up from our Airbnb in Panama City and drove us all the way across the skinny part of Panama. The first bit was on the highway, but then we turned off onto a smaller road and that was a wild time. I slept through it on the way out (since our pick up had been at the crack of dawn) and so got to experience it for the first time on the return, but Colin assured me the hills felt just as harrowing on the way out. I know it was all very well organized, because as soon as we got to the port, they knew what boat we should get on and where we should get off and which one was our tiny hut on the beach, but that organization was not communicated to us. We had expected there to be more international tourists, but somehow we were the only ones on our island that didn’t speak Spanish – it seemed like most of the people there were local to Panama and visiting for a weekend beach retreat. We had no idea of what the plans were or where/when we were supposed to be anywhere, so it was a whole weekend of going with the flow!

That first day was so relaxing. We swam in the ocean, wandered all around our island, read, tanned (or sunburned, in my case), and drank rum straight from the bottle. I had read somewhere that there would be a tour to another island. When no one mentioned it to us at lunch, or dinner, or even breakfast the next morning, we assumed it wasn’t happening. We joined a family to play some volleyball.

It was at that point that someone from the island came over and spoke in Spanish to the woman who had invited us to play volleyball. She turned to us and said, “your boat for the tour is here,” which was a surprise to us! We had to race across the island, change into our swimsuits, and try to pack everything we would need for the day, which…. we did a terrible job at. We didn’t bring money or anything.

The tour was fun, though! They took us to a couple of the other islands, and while I would have liked a little more free time on our own island, it was cool to see starfish in the wild and snorkel near a shipwreck.

For anyone who is considering a visit, do know that it is remote. There is not a lot of development on the islands, which is amazing and cool and makes you feel a little like you’re in Robinson Crusoe. Our hut on the beach was the “fancy” kind that had its own bathroom and even then it was very basic. Which I would say is part of the fun, but we definitely saw people who did not look prepared. I had a fantastic time, and would absolutely recommend it, but please do your research!