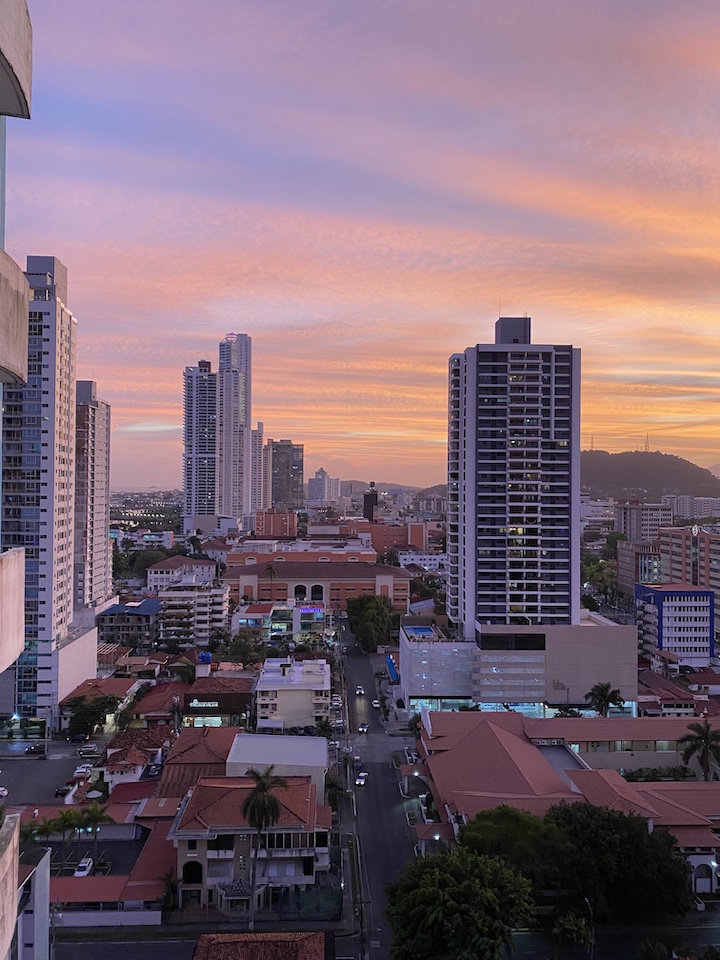 When Colin and I told our coworkers we were going to spend a couple weeks in Panama this January, one of them asked what Panama was known for, “besides hats and the canal.”

While that is definitely their brand as a country, I loved our visit to Panama City! It was absolutely gorgeous. The photo at the top of this post was the view from our Airbnb at sunset, with no editing or filters or anything.

Mostly what we did was walk along the ocean to get coffee in the mornings, and then we would pick an area to explore and find a restaurant for dinner as we wandered around. We drank a lot of sangria and spent time in the parks with the locals, where you’d see people playing basketball or soccer late into the night. I think that’s something the United States is really missing in most areas – outdoor public spaces. Salt Lake has started doing summer weekend nights where they’ll shut down main street and have outdoor seating for restaurants, which is a great start, but we need more of that all the time. It’s so pleasant being in countries that have figured that out and being able to spend time just out in the community!

We also went into the historic district, which felt a lot more like the places where I’ve spent time in Latin America thus far. Sort of a Havana-vibe. It’s a small part of the city, though. The majority of it looks super modern and is full of skyscrapers.

Of course, the non negotiable activity for me was seeing the Panama Canal, because we couldn’t come all the way down here and not see it! It’s about half an hour outside of the city, so we took an Uber there and back. Interestingly, this was the only place that actually felt “touristy” while we were in Panama. We also went to the San Blas Islands (which will be a separate post) and even then there were hardly any foreigners, but the canal museum had a bunch of tour groups. We watched a few boats pass all the way through the locks and marveled at the engineering. Thinking about when they built this, and how many ships pass through it per day, it was really an astounding feat!