Shortly after Nationals, I left again to go visit my friend Emmy in DC!  She goes to American University, so I could stay with her while I was there.  I arrived in the evening, and after getting to her apartment, we went to bed early so that we were ready for a full day of sightseeing.

I’ve been to DC three times, although all of those times were for mock trial and that meant my sightseeing was pretty limited, since I spent most of the time there in various courtrooms or classrooms in skirt suit as I testified about nitrogen narcosis in scuba divers.  Although the second time I was there, we did end up stuck for an extra night because of inclement weather and took a limo to the White House (or tried to, at least) and a cupcake shop.  Those were some great times, and I was really excited to get a chance to see more of the city. 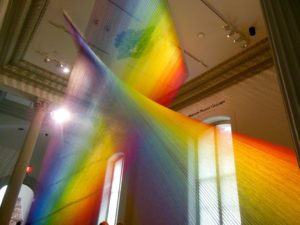 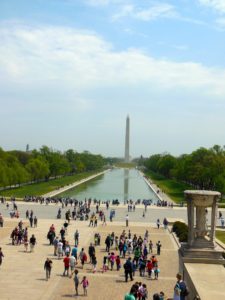 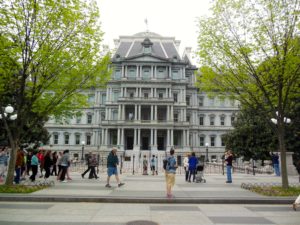 Thursday started out going to breakfast, and then we headed to the area around the White House.  After taking the classic tourist picture, we headed to a modern art museum, which had a couple amazing rainbow pieces, giant nests, and an alarmingly bright room with bugs on the walls.  Then we headed over to the monuments, and wandered through all the classics.  The Lincoln Monument, the memorials for Vietnam and Korea, the Washington Monument, and others that I don’t know the names of.  Then Emmy had to go to class.  I spent my afternoon at the Spy Museum, which was awesome.  I paid extra for the spy experience, which was basically an escape room, but even more involved.  We got to search an office and run around and hide, and it was fun.  None of us “died” so that’s always good.  I also wandered through a few parts of the Smithsonian museums and met up with one of my friends from Northwestern for dinner afterword. 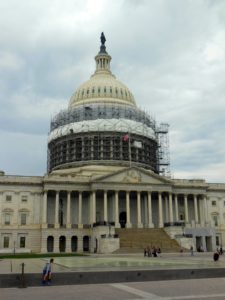 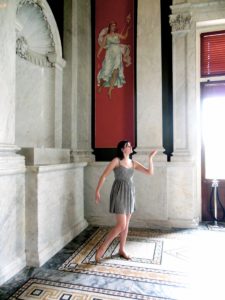 The next morning, we went to the Capitol for a tour.  I had booked one online, and we got to see the inside, check out where the House of Representatives votes, and see the Library of Congress.  There was some beautiful architecture inside, although the dome was under construction.  We walked through the botanical garden, and then spent the afternoon at the zoo.  Some highlights were the sloth bear, the pandas, the seal that kept coming back to the glass, and hearing a lion roar for the first time, which was frankly alarming.

On Saturday, we started our day at the Holocaust Museum, which I had wanted to see for a long time.  After going to Auschwitz (x) back during study abroad, I’ve found myself fascinated by the topic.  There was a section on the Cambodian genocide in the basement, which was interesting.  The main exhibit on the Holocaust was packed with people, but it was definitely worthwhile.  They had videos, and all kinds of old news stories and propaganda.  There was an original railway car that was once used for transport into the death camps, and a cast of one of the walls from the synagogue that I saw in the Jewish quarter of Krakow.  There were even some of the shoes from victims.  In the bookshop, there was a Holocaust survivor selling her memoir, so we got a photo with her and bought her book. 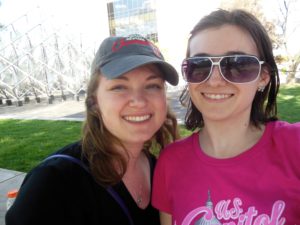 After that rather depressing visit, we went to brunch.  The place Emmy wanted to go was closed or something so we ended up finding a tapas place with some strong bottomless sangria.  After a lot of drinks, we went to a modern art museum, which is even better inebriated.  Then we headed to Arlington to meet Emmy’s boyfriend for dinner.

The next morning, we went to another brunch and got cupcakes afterward, and walked around a little more.  It was so lovely to see Emmy again, and I loved DC.  The humidity would probably be a challenge for me, but otherwise I’d definitely love to live there.