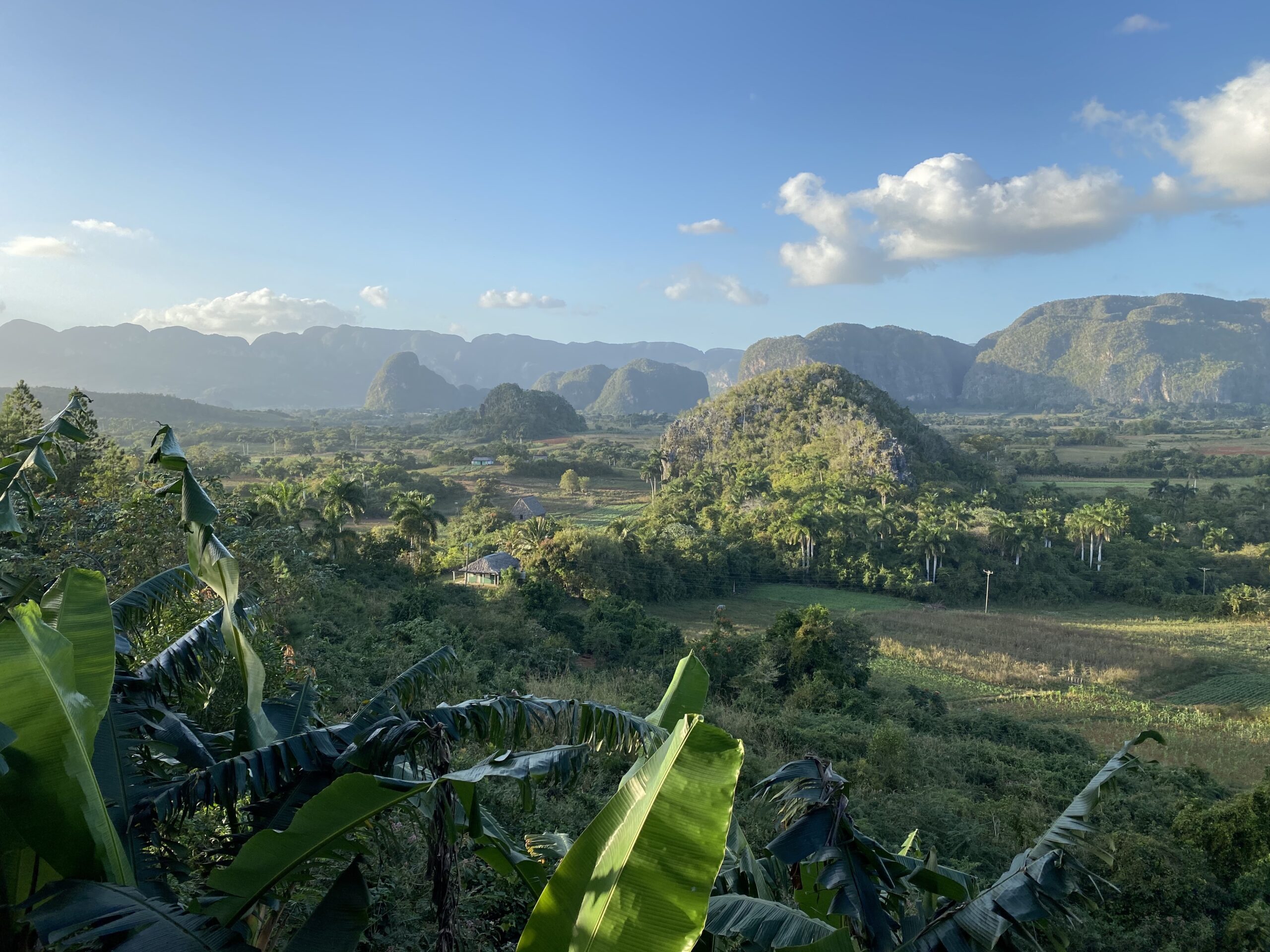 So it turns out that roosters don’t just crow in the morning, as I have been led to believe in cartoons. They crow constantly, all night long, at intervals of about 3 minutes. Isn’t that fun? I learned that at our homestay in Viñales, at about 2 a.m. Needless to say I have a new least favorite animal.

Real talk, though, Viñales might be the most stunning place I’ve ever seen. It’s cracked the top ten for sure. Apparently Steven Spielberg wanted to film Jurassic Park here and the State Department was not on board. This was our next stop after Havana, and it is a tourist hotspot for one reason: cigars. Yep, Viñales is the region of Cuba that produces that world-renowned tobacco.

Before we got there, though, we had a few other detours! The first was an absolutely amazing place called Fusterlandia. An artist, José Fuster, wanted to reclaim his neighborhood and created these mosaics. The whole place feels like a trippy dream world, and it was so cool to wander through and see all the different murals and characters he created out of tile.

From there, we went to Las Terrazas, which is an effort to re-forest one area of Cuba and to stimulate the local rural economy. One of the aspects of my trip that I absolutely loved was the fact that we met so many organizations who were working all over Cuba to improve life for the citizens. I was impressed, time and time again, with the creative solutions to problems that people had. While in Viñales, we saw Soviet-era laundry machines that were somehow still running, cobbled together with parts that the family had been able to scavenge.

Side note, the whole time we were in Las Terrazas, our guide kept pointing out cool birds, which was around the time I realized I am terrible at birdwatching! How am I supposed to spot them in the trees?

Anyhow. We got to try some local coffee and meet some artisans. I bought my mom a wooden hummingbird sculpture. At first, I was hesitant because it looked very delicate, with the beak and the wings, and I didn’t think I could bring it back to the US safely. I asked the guy selling them what he wrapped it in, and I kid you not, he held up a piece of paper. At my expression, which surely read ?????, he took the hummingbird and broke it down to its components, showing me how I could fit the pieces back together once I got it home. Way cool.

On to Viñales! Look at that valley. This is a more agricultural section of the country, and we had a lot of wonderful farm-to-table food, including a live cooking demonstration. I was low key worried about food on this trip, because some places are really weird about me being vegetarian (looking at you, Eastern Europe and Central Asia), but in Cuba, there is always a vegetarian option. Even if there are only 3-4 dishes in the restaurant, one will be vegetarian. A few highlights: plantain chips, taro root, and so much pesto! Plus all the rice dishes were stellar. I had never had taro before and it was delicious.

One other brief anecdote from Viñales: getting out money! So, money in Cuba as an American is a challenge, because American bank cards cannot work there. I mean, your first barrier is that a lot of places will not have credit card machines, but even in places that do, an American card is no better than a used napkin on the side of the road. You have to bring in cash and exchange it. I brought euros, because I figured I’d have a better time with those than with USD.

The other quirky thing is that there are actually two different currencies in Cuba. One is Cuban pesos, CUPs, which are the local currency. The other is Cuban convertible pesos, or CUCs, which are for foreigners and are tied to the US dollar. Fun fact, Cuba is actually in the process of phasing out CUCs. No idea how that will work, but I can only report on how it was when I was there. Basically, you want to take care that you don’t end up with CUPs as a foreigner because they are useless to you, you can’t convert them back and they’re only really accepted at local grocery stores/markets, which you won’t be going to anyway.

All that to say…. when I was at the airport, I wasn’t able to convert as much as I wanted, and so I was dangerously low by the time we got to Viñales. And I mean, I wanted to buy cigars so I needed cash. So I went to the bank super early, way before it opened, so I could stand in line with the locals. I got a pretty good spot too. And there was a Cuban grandma there who was enforcing who had what spot – you didn’t need to really stand in a line, because people were keeping track of who was where. Locals are willing to cut in line in front of foreigners if my time at the airport exchanging money back to USD was any indication, but this time it went smoothly and the whole banking experience went well. I do definitely prefer the ability to just go to an ATM and pull out what I need.

The tobacco farm was a fascinating experience! They walked us through the entire process, from growing the tobacco and drying it out to the art of rolling a cigar. I was able to bring some back to the US, since there’s a certain amount allowed through customs, and so my dad has them carefully packed away for special occasions.

Here I am, loving the option to pay an extra dollar and have my drink in a coconut. Afterwards, the waiter took the coconut and hacked it up with a machete so that our table could eat it.

Viñales was a highlight of the trip for me. I’ll never forget eating dinner in that restaurant at the lookout point, watching the sun set over the valley while I drank daiquiris. The people we met were friendly and excited to show us their traditions, and the landscape was unparalleled. If it’s good enough for Steven Spielberg to want to put velociraptors there, it’s good enough for me.