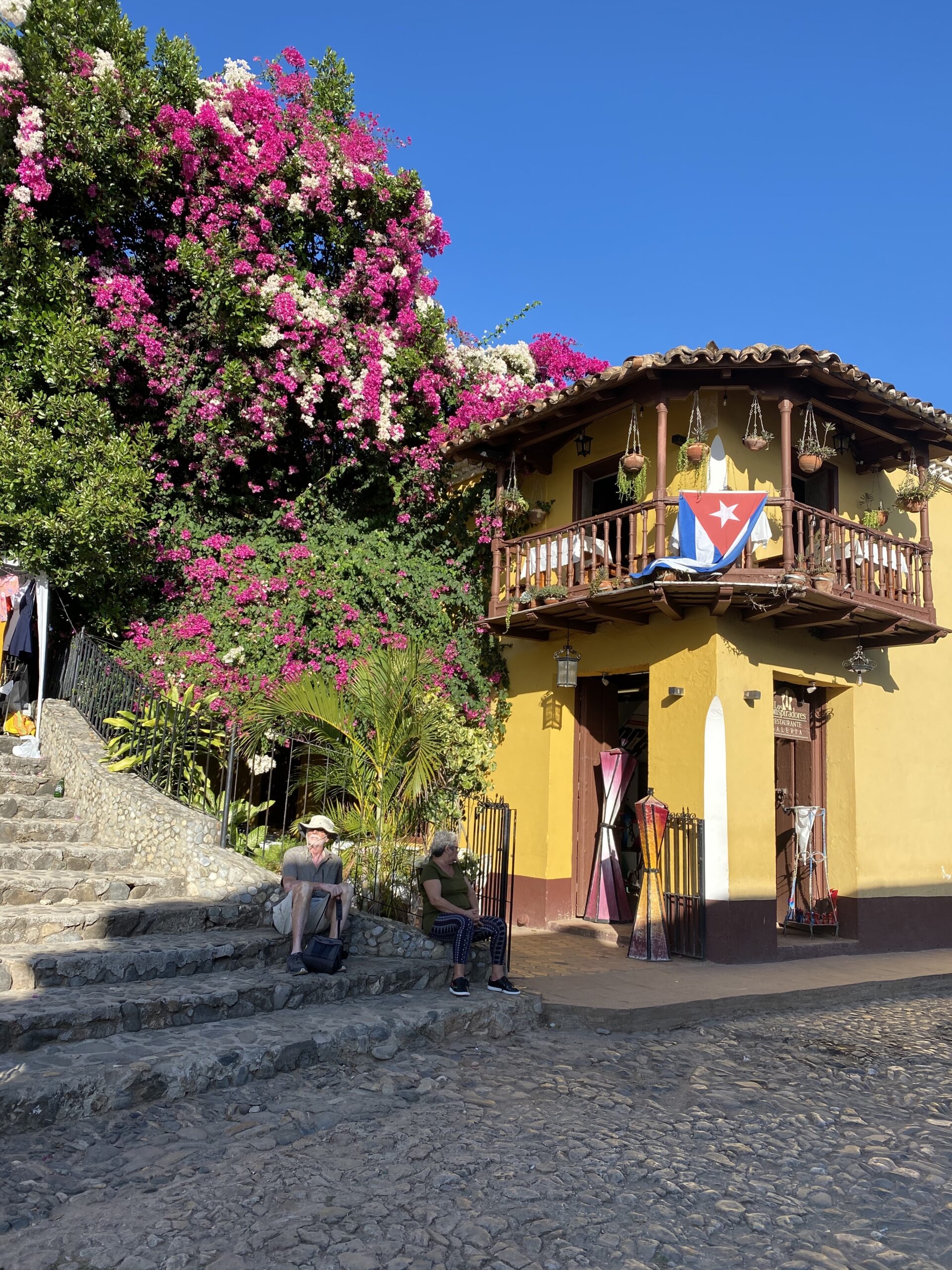 As we left Viñales, we had one stop scheduled: The Bay of Pigs. Yep, the site of the failed invasion in 1961. Do you know what I did there?

Sunbathed. Dipped my feet in the ocean. In fact, I actually got a bit sunburned.

There’s something so crazy about going to the places you read about in history textbooks and making new memories, ones that aren’t about death and the Cold War. We also spent part of our day at the Korimakao Cultural Project, which serves rural communities by offering arts education! We got to see several performances, including singing, dancing, and playing instruments, and ended in the gallery where students had drawings and paintings on display.

We spent the night in Cienfuegos. Our first stop was this stunning hotel for drinks!

Cienfuegos was lovely. We didn’t have a ton of time there, but we spent the night and then had a few hours in the morning to shop for souvenirs. There was a nice pedestrianized section in the center of town that had lots of little stalls with artists selling their wares. One of my favorite finds from the trip was a beautiful little wooden dancer statue. As a bonus, it was wrapped in local newspaper. I would like to note that the newspaper front page that I received had not only the date it was printed, but the number of years since the revolution.

Side note, I would like to put in a word for the hospitality of the people running the casa particulares. They made us breakfast every morning, and there were some great ones! Lots of tropical fruit, alongside bread and cheese and meat. My personal favorite was this tropical fruit plate. To quote Mulan, “and it’s happy to see you!”

The last place we went while we were in Cuba was Trinidad. Not so fun fact, Trinidad was having issues with their water when we were there. The New York Times did an interesting article on the struggles that they as a nation have had with water distribution, and they mention the time I was there, January 2020, as a point where Trinidad went without water for 20 days.

Unfortunately, we weren’t told about that when we arrived, and so we didn’t know to do our part to help ration things. The water at our accommodations was off starting that first morning when we woke up, and it was a few days of baby wipes and dry shampoo. Despite this, Trinidad was a great experience!

We had lots of wandering around, going to museums, and eating ice cream while trying to stay out of the heat and humidity. During our last night in Trinidad, we had a picnic on the beach! They pulled out all the stops to give us a feast, and we stayed there until it got dark. The sunset was absolutely stunning!

We weren’t quite done with Cuba, though. En route back to Havana, we stopped in Santa Clara and went to the Che Guevara Mausoleum. The museum had the Cuban take on the revolution, and I found it interesting to compare that to the books I’ve read on Cuba’s history. The one I would recommend here is Bacardi and the Long Fight for Cuba, which chronicles both the history of Cuba and the history of the Bacardi rum brand. The Bacardi family actually had a dispute with the Cuban government over who had the rights to produce Bacardi rum, which is…. possibly the most interesting trademark dispute ever? Unknown, but I do know it’s one of the books that first sparked my interest in visiting!

A fascinating way to end the trip, for sure. Getting back to the US was a little bit of a nightmare. It took ages to exchange my money back and I had to run through the airport to catch my flight, and then I got delayed nine hours in Orlando and so my last flight didn’t even take off until about 3:50 a.m. Still, I might not have complained if I had realized it would be over a year until I would be back on a plane. It’s been over 13 months now. Not exactly what I expected when we started 2020. Still, it seems like there’s hope now. My family and friends are starting to get vaccinated, and I think there’s a light at the end of the tunnel that isn’t merely an oncoming train.