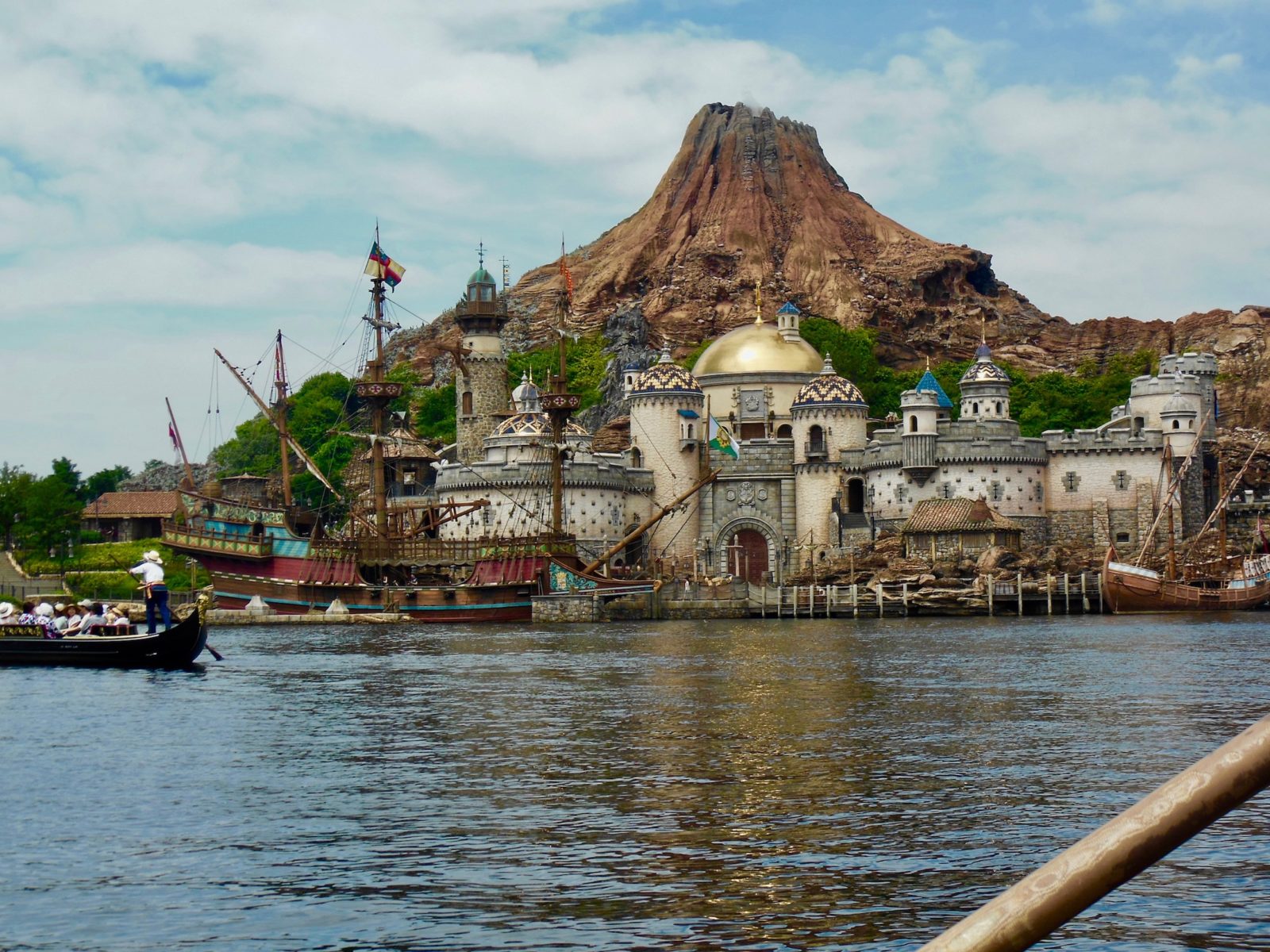 July 23, 2017 admin Leave a comment
I really agonized over whether I should go to Disney or do something more cultural, like a day trip from Tokyo where I would actually see buildings that contributed to the history of Japan.  But I figured I would see enough shrines and history during the rest of my trip, so I went with the theme park.  And it was a good call, I had a blast at DisneySea. 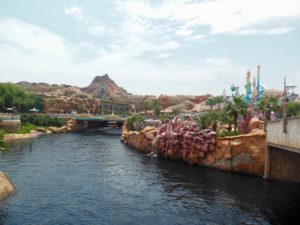 Tokyo has two Disney parks, Disneyland and DisneySea.  Disneyland is fairly similar to all the other Disneylands in the world (California, Shanghai, Hong Kong, Paris, Magic Kingdom at Disney World), with the castle, a number of the same rides, etc.  You know the drill.  For the record, I have only been to the one in California, and am getting this information off of various Disney blogs. 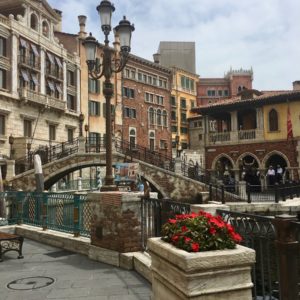 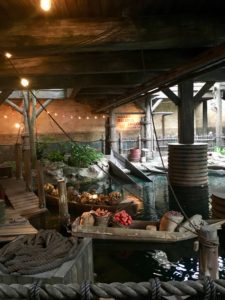 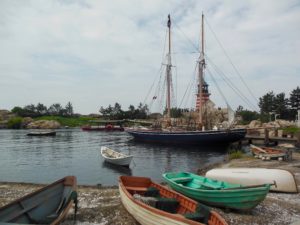 DisneySea, on the other hand, is closer to what I understand Epcot to be.  There are different regions, all of which are port or water themed, and most of these represent different parts of the world.  I’ll get into what those are a little later.  It’s commonly argued that DisneySea is the best Disney park in the world, according to one of my coworkers.  She sent me several blog posts on the subject, as well as ones that talked about what to do and see while there.  I relied on those heavily to plan my day, which were super helpful.  The ride that is allegedly the best, Journey to the Center of the Earth, was closed while I was there.  Sad, but it freed up time to do other things. 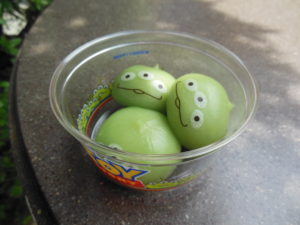 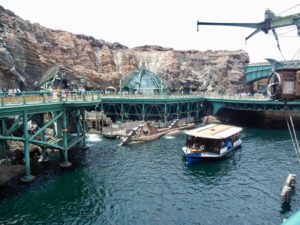 The first thing to understand about Tokyo Disney is the sheer number of people.  It’s not uncommon for the wait times for popular rides to exceed two hours, and in fact, that’s something I saw for a couple rides when I was there on a Monday.  Thus, between that and the fact that I’m a super picky eater, I opted to do all my research and plan everything out.  For the record, here is the blog post I used, it was excellent.  This post has all of the rides, ranked by that blog. 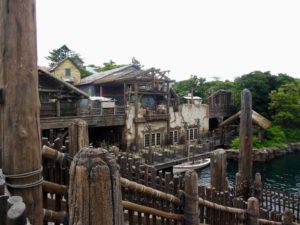 The first recommendation by the blog is to skip Toy Story Mania.  They use the phrase, and here I quote, “It’s like the running of the bulls, if the bulls were all super polite.”  This is not an exaggeration. There are people holding signs that say “do not run” when you enter the park.  Everyone rushes straight for that area of the park, and fastpasses go very quickly.  I opted instead to get a fastpass to the Tower of Terror.  Then I headed to 20,000 Leagues Under the Sea, where I was the only one in my submarine and the ride shouted at me in Japanese.  That was only slightly alarming.  I also went to try to ride Indiana Jones, but it was down.  By the time I got back to the American section, I had done a quick tour of the park and gotten my bearings, and it was time to use my fastpass. 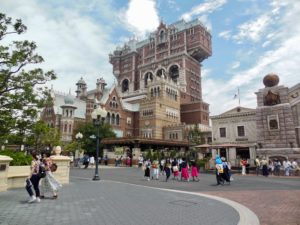 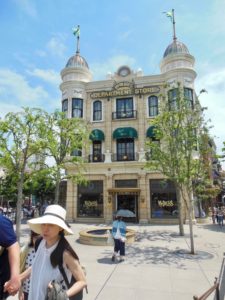 Tower of Terror was super cool, even if I missed some of the story due to the language barrier, and even though I hate drop rides.  I even got my second fastpass for it, since I made the assumption Indiana Jones was down for the day.  I also entered the lottery for Big Band Beat, a show that is surprisingly in English, and won, so I had that shortly after my second fastpass and the morning free. 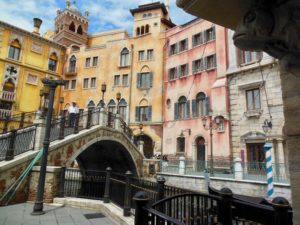 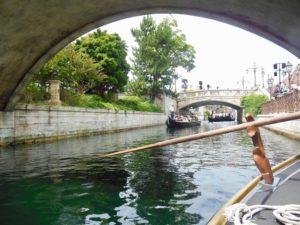 I went to the Mediterranean Harbor first, which is a section designed to look like Venice.  I rode a gondola, was serenaded by our rower, and ate pizza, so…. it’s basically the same as going to Italy, right?  Seriously, though, it’s a beautiful area of the park. 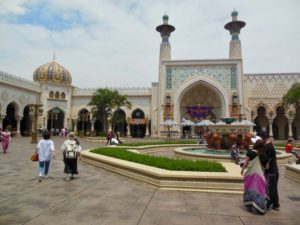 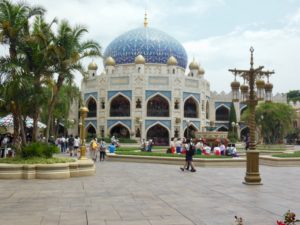 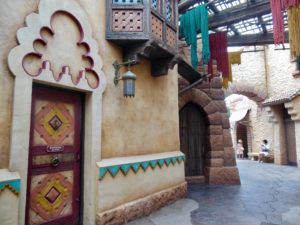 I headed over to the Arabian Coast next, which is probably my second favorite area.  They have a double decker carousel, and a ride that’s on a boat with puppets.  I hesitate to compare it to “It’s a Small World” because, you know, it’s awesome and not irritating, but it’s the same type of ride.  The decor was amazing, and it was definitely worth the time spent wandering around to see all of the nooks and crannies of that area. 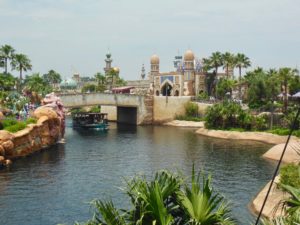 By then, it was time to head back to use my second fastpass and watch the show.  Because I am, on occasion, quite lucky, my seat for the show was in the sixth row in the center.  It was fun, with 1920s music, singing and dancing, and characters who joined in with the actors.  The finale was set to Sing Sing Sing.  Plus, since it was all in English, I actually understood what was happening!  Since it was in the heat of the afternoon, I appreciated the time to sit in an air conditioned room and rest my feet. 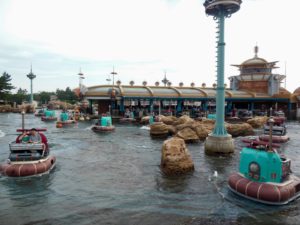 From there, I took the train to Port Discovery, which is probably the least interesting part of the park, and did Aquatopia, which is another great ride for the afternoon.  It gets you totally soaked, which was very welcome at that point.  I wandered back through Cape Cod and headed to the Mediterranean Fortress, where I explored until I got tired and then stopped in Magellan’s for a glass of wine.  Magellan’s was listed as a recommendation on the blog, and it was truly excellent.  An absolutely beautiful restaurant, and one where I didn’t feel like I was still in a theme park when I sat down. 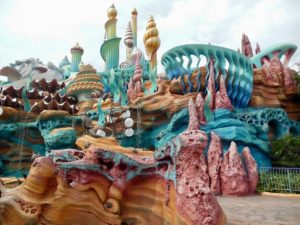 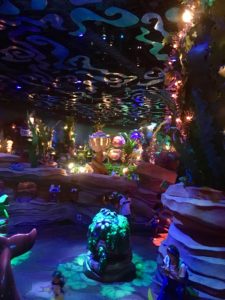 From there, I just had a few more things to check out before I would have seen it all.  I headed through the Mermaid Lagoon, which has rides geared toward younger kids but is definitely worth 20 minutes or so to walk through.  I rode Jasmine’s Flying Carpets, which is basically Dumbo, and then I walked back toward the Lost River Delta, which was the South American section. 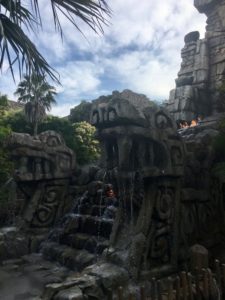 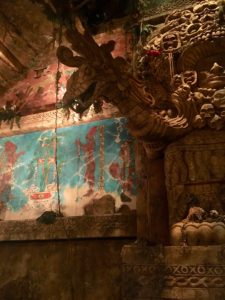 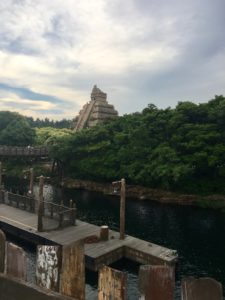 This is when I learned that Indiana Jones was not out all day, and in fact, was currently operating, with 120 minutes listed for the wait.  At this point, I was meeting Romy in about 90 minutes.  So, I almost certainly should not have gotten in line, but I did anyway and hoped for the best.  The line felt like it was crawling.  Less than that- we spent a lot of time standing still.  But after we had gone part of the way, there was a sign that pointed one way for single riders and the other way for everyone else.  The blog had said to do the single rider line, and it definitely seemed to be moving faster, so I went through the gate and got to the back of that line.  It absolutely did move faster, and I appreciated that as I walked toward the ride instead of inching along.  But then we got to the front of that line.  Where there was a sign that said fastpass, and a person collecting fastpasses.  Concerning, seeing as I didn’t have one.  When I got there, I said that I thought that this was single rider, and the guy nodded, and told me to go down a staircase instead of continuing in line.  An empty staircase.  Confused, I did so, and found myself in a separate queue next to the normal line.  Less than a minute later, I was on the ride.  Long story short: use single rider in Japan.  Also, it’s very weird to hear Indiana Jones speaking Japanese. 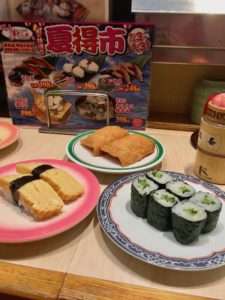 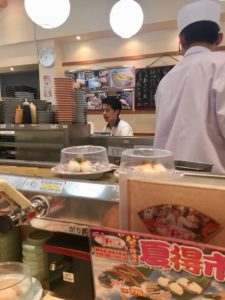 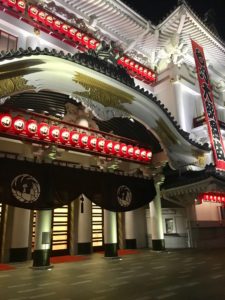 I managed to catch a steamboat back through the park, and got on my train to meet Romy only a few minutes late.  She wanted to take me to a conveyer belt sushi place.  Since she speaks Japanese and I am a picky vegetarian, this was my one chance.  We walked from Tokyo Station to the Tsukiji Fish Market area, where we found a place that was truly an authentic hole-in-the-wall type place.  Romy chatted with the chef, and I tried a cucumber sushi, a tofu sushi, and even an egg sushi, in perhaps my most adventurous food experience yet.  But, eating sushi is the quintessential Japanese experience, and it was a perfect way to close out my time in Tokyo. I said goodbye to Romy, and headed back to my hotel for a last night before starting the remainder of my trip.