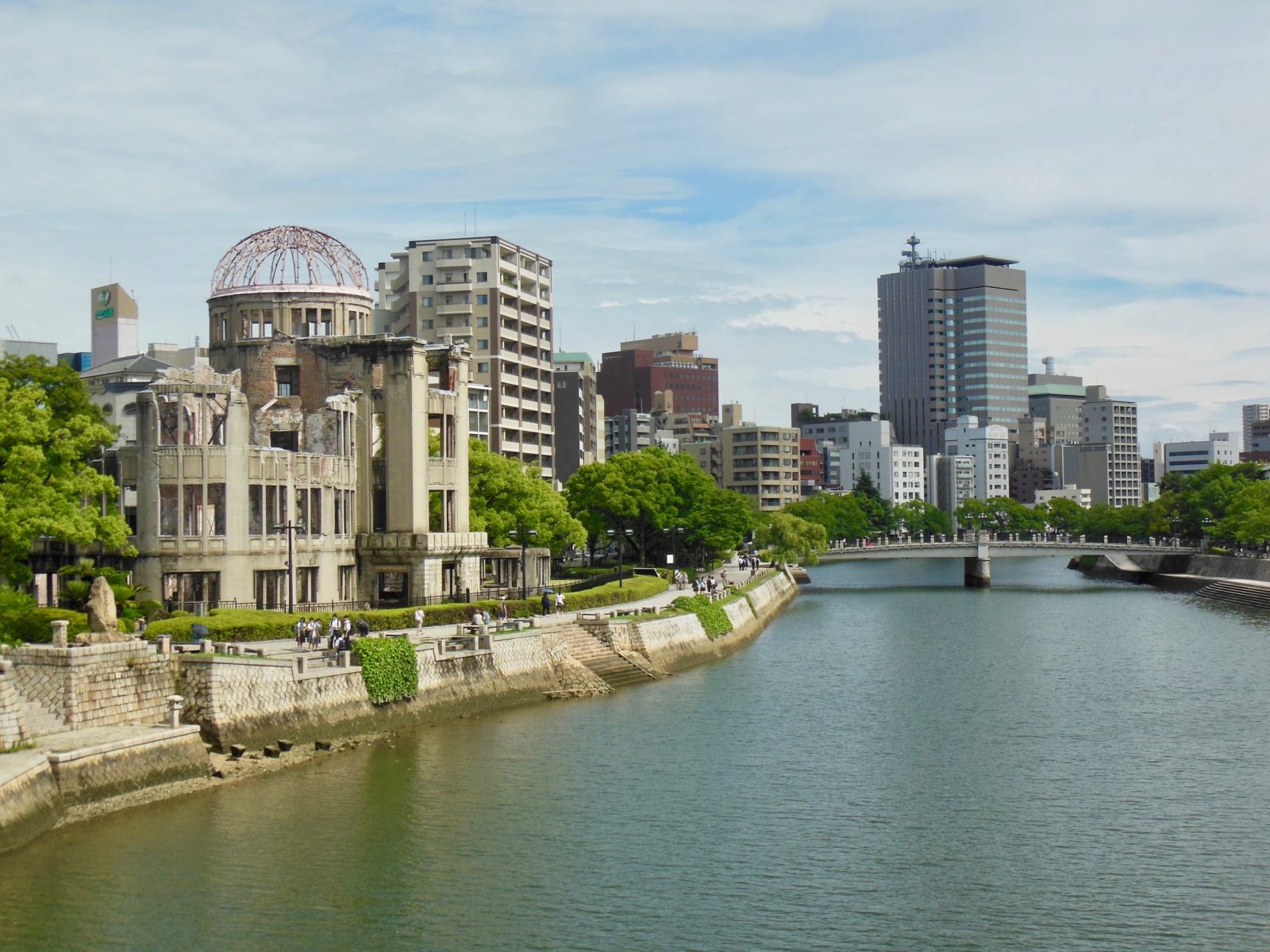 July 24, 2017 admin Leave a comment
I left Tokyo Station on a bullet train to Hiroshima, which took the better part of my morning.  Now, of course, would be the perfect time to talk about train travel in Japan.
It’s amazing. 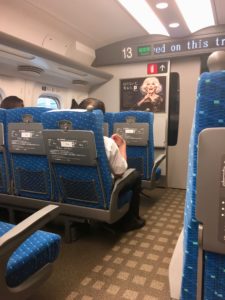 First of all, foreigners traveling to Japan can get a JR pass, which is 7, 14, or 21 days of unlimited travel on JR lines.  This includes almost all bullet trains throughout the country, as well as city metro lines in Tokyo and Osaka.  Just in going to and from Hiroshima meant that it paid for itself, on my trip. 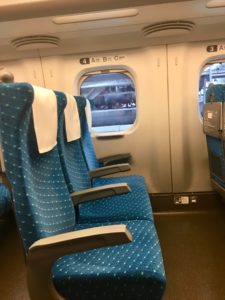 Second, trains are beautiful.  They’re clean, they’re on time, they have the leg space of a first class domestic airline ticket… they’re exactly what a train should be.  Going back to my regular commute was so sad after taking the trains there.
On the subject of things that are infinitely better in Japan, I would be remiss if I didn’t mention 7/11s.  I think I’ve only been to ones in the U.S. a few times, and most of that was as a drunk college kid, buying slushies so we could mix in alcohol.  They’re not exactly high class institutions.  But in Japan, the food is good, and they’re clean, convenient, and ubiquitous.  For foreigners, they’re the best place to use an ATM because foreign cards actually work there, and for me, I went there often to get food.
As a picky eater traveling solo, I don’t often go to restaurants, so it was great to be able to pick up whatever I needed at any given train station or street corner.  There were snacks, and breakfast items, and drinks, and sushi, for those of you who eat it.  They also sold bags of edamame, various forms of Japanese ice cream, wine and liquor, various toiletries, and other microwavable foods.  My favorite things there were 1) drinkable yogurt, 2) squeezable ice cream, and 3) pancake sandwiches, so called by Romy, which were basically two pancakes with butter and syrup in the middle that is possibly my new favorite breakfast food. 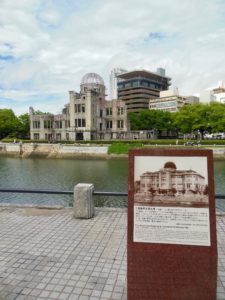 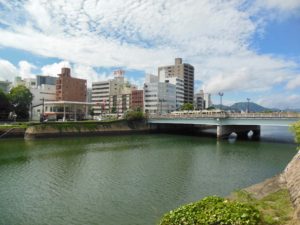 Anyway.  Those observations aside, after my morning of traveling to Hiroshima, it was raining pretty hard.  Turns out that my choice to go in rainy season was indeed a questionable one, since there are in fact tropical storms during rainy season.  Like the one that was currently hitting western Japan.  I was in luck, though, because my hotel was connected to the station, and so I could check in and eat lunch there without having to venture into the rain.  By the time I was ready to start exploring the city, it had lessened to a mere annoyance. 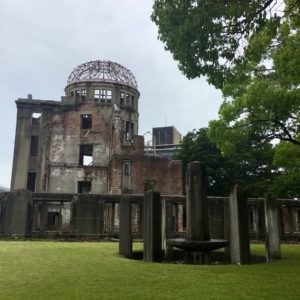 Anyone can tell you what the main sight of Hiroshima is, and that’s where I headed first.  The dome that still remains from the atomic bomb blast.  In a way, I was glad it was raining.  You may remember that one of the strangest aspects of my visit to Auschwitz was that the sun was shining, which felt wrong.  Hiroshima had a similarly somber past, and the rain put me in the right emotional place for that. 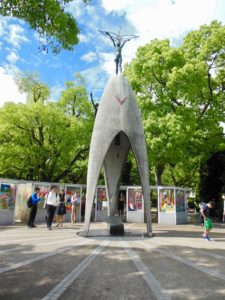 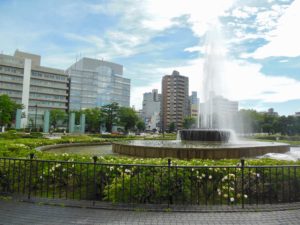 The atomic dome is located in Peace Park, which, like Berlin’s Tiergarten, is filled with memorials and museums to remember what took place there.  I’m not sure what they all represent, but I did go in the Hall of Remembrance and the museum.  The Hall of Remembrance had a section that had images of the city after the bombing, constructed out of 140,000 tiles.  One for every person who died in the city in 1945.  Continuing on, they had stories and video reconstruction from some of the survivors, which was hard to listen to.  Coming from the United States was difficult, because there’s the inescapable truth that the country I was born into caused this.  And while in history class, it might be easy to say that was the best choice at the time, it’s hard to separate that from the immense guilt that comes with hearing how my country’s actions affected these people.  Happy 4th of July to me. 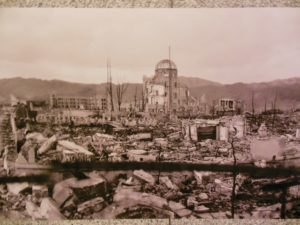 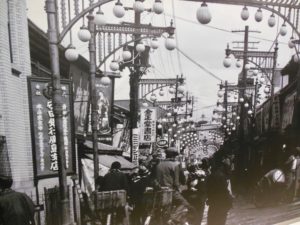 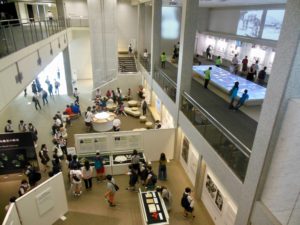 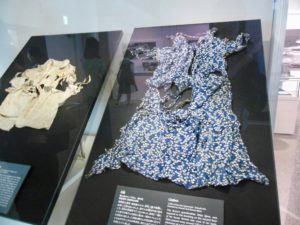 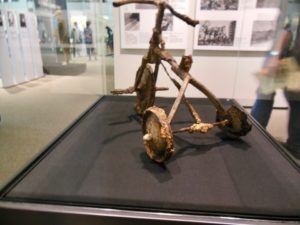 I went to the museum next, which had images from before and after the bombing.  I had never actually seen pictures of Hiroshima before the bombing (see the second picture above), so it was interesting to see what the city had looked like originally.  There was a whole section on the horrors of atomic bombs generally, and then the most moving section had artifacts that had been partially destroyed in the blast.  There were stopped clocks, clothing, images of the victims, and a lone tricycle that had survived the blast when its owner did not.  It was definitely an emotionally difficult visit. 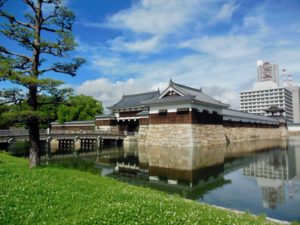 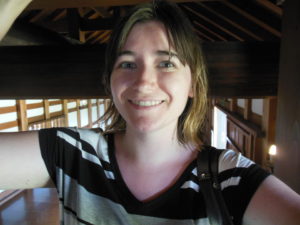 By the time I left the museum, the sun was shining again.  I headed toward Hiroshima Castle, in another park.  There were also several shrines and other buildings in the park that I explored before I got to the castle.  The castle, obviously, is a reconstruction, and I opted not to go inside since I already had plans to visit Himeji.  But the outside was quite lovely.  The selfie is from a doorway that I walked through, where the top of it was maybe an inch above my head.  I’m 5’6″ so if you’re tall in Japan, be prepared to duck all the time. 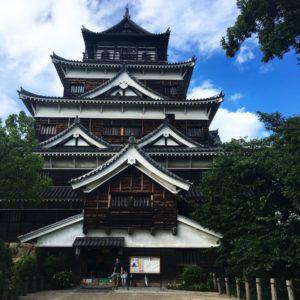 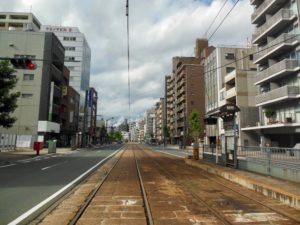 I took a long walk back to my hotel, where I got to see more of the city.  Personally, I think a lot of the architecture was a bit boxy.  It’s not the most beautiful city I’ve walked through.  But my favorite thing I saw when I passed a school.  On their bulletin board was a big poster, where the kids had written their recommendations for tourists in English.  They wrote where people should go, and why, which was adorable.  Especially because some of the suggestions were “Pokemon Training Center.”
It was a heavy trip, and a little ironic that I scheduled it for July 4th.  Purely coincidental, I assure you.  But I’m glad I got to go see it.