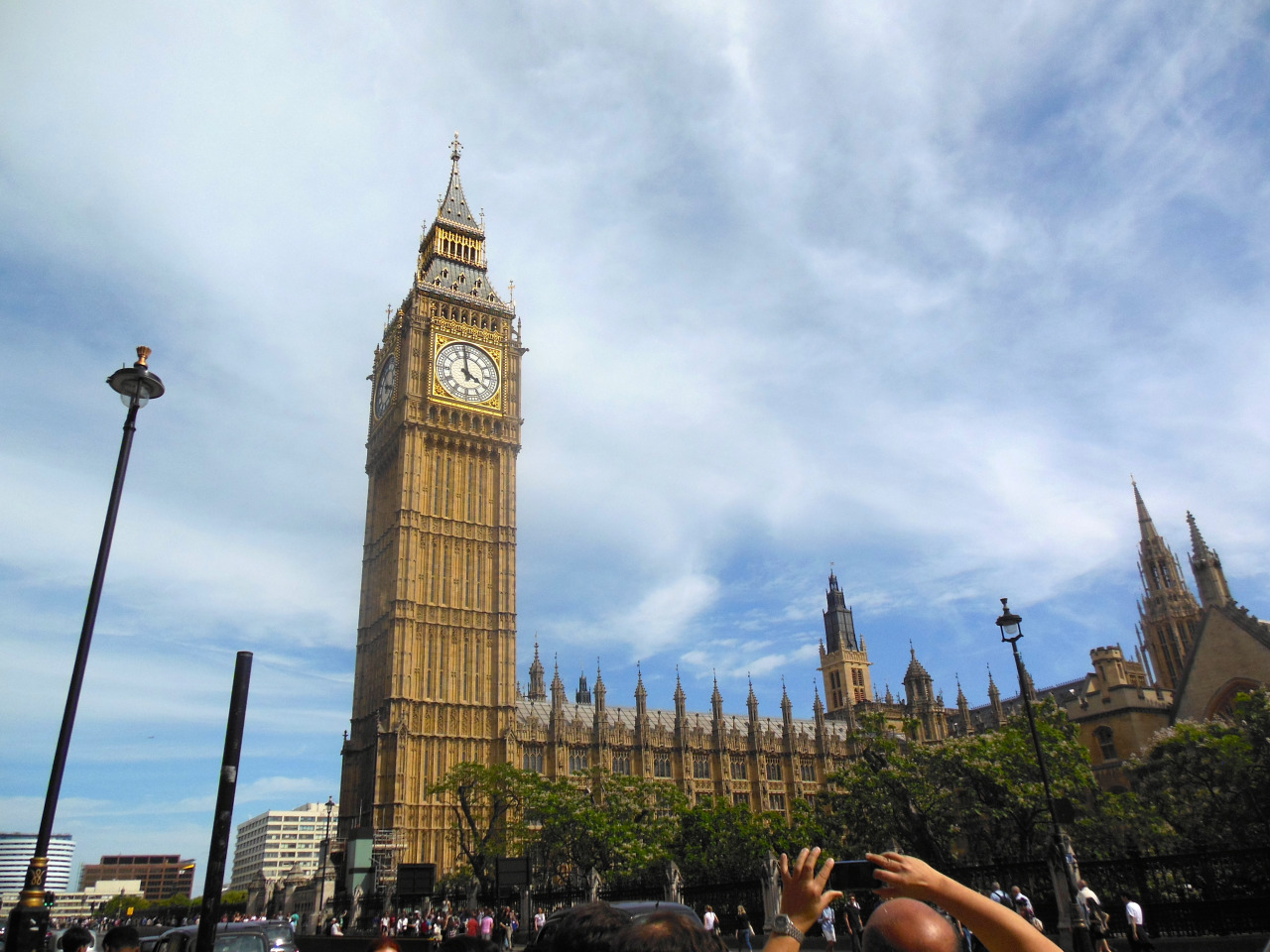 I honestly cannot imagine a better way to see London.

Admittedly, I didn’t see all of the touristy things.  I didn’t go in Westminster Abbey or see the inside of a single church.  I didn’t visit the Tower of London, or check out the views from the London Eye.  Sadly, I didn’t get to go do a Harry Potter Studio Tour either (but I will be coming back for that one!). 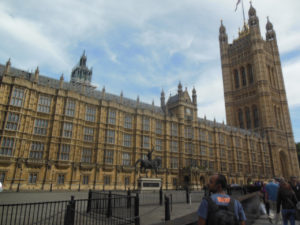 London was a bit of a spur of the moment trip.  One of my friends from Northwestern, Sona, was working in the city for the summer, and she suggested that I come visit her.  I looked it up, figured out Easyjet flies from Strasbourg to London, checked out the timing, and booked the tickets.  It was a great decision.

I arrived on Friday night, and we met up at an Italian restaurant near Sona’s apartment.  She lived right near Paddington station, in a cute little area with a lot of shops and restaurants.  After a lovely night of catching up, we headed to bed so that we would be ready for a day of touristy things! 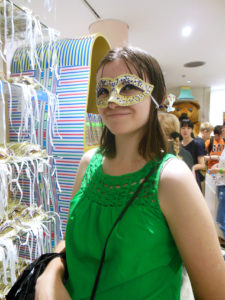 We stopped by Baker Street in the morning, because I’m a nerd and wanted to see the hypothetical home of Sherlock Holmes.  Then we headed to the British Museum, which Sona correctly described as housing all the treasures that Britain stole from the rest of the world in their quest for an empire.  It was pretty cool.  We saw the Rosetta Stone, artifacts from India, Egypt, Mesopotamia, Greece… amazing artwork and objects from history.  After lunch, we headed off to the major touristy sites, namely Westminster Abbey, Parliament, Big Ben, and Buckingham Palace.  We couldn’t go inside any of them, but it was amazing to walk around and see the places that I’ve heard about and seen in pictures for years.  After a long walk along the Thames, Sona offered to take me to Harrods at Oxford Circus, where all the nice shops are. 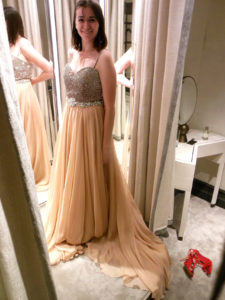 And.  What a nice shop.  It was incredibly overwhelming.  The bottom level has a bunch of food and markets, with a whole chocolate section and beautiful pastries.  I bought an Oreo cupcake that looked like it was dusted with gold.  Then Sona took me up to the clothing section, to show me some absurdly expensive dresses that she had seen before.  Three shop assistants later, we were in the Evening Dresses Boutique.  It was practically out of my dreams.  The dresses were incredible, in all different colors and covered in rhinestones and glitter- with the price tags subtly tucked under the skirts to keep them out of sight.  Which made sense, considering most of the dresses were around $2,000… and some were special, one of a kind Harrods dresses for around $16,000.  It was sort of unreal.  And, as we’re wandering around the shop getting excited about dresses, the shop assistants come over and offer to look for them in our size…. So, we went ahead and tried them on.  Yeah.  That dress I’m wearing up there, with the sparkles?  About $2,300.  It was totally awesome.

We left when the shop closed, and headed back to have a quiet dinner and figure out what to do the next day.  I’d initially had a Skype interview scheduled for that Sunday, but I woke up that day and had literally no voice, so I had to reschedule.  While unfortunate, it did allow us to have a full day out on the town.  We started with the Cereal Killer Café, fantastic both in name and business idea.  It’s located around the area where Jack the Ripper used to strike, and it features cereal from the US, the UK, and continental Europe.  You can combine cereals, get different milks, add toppings…. and the decorations are all very retro, with cereal boxes through the ages along the walls.  From there, we headed down through the Brick Lane market, stopping to make a couple purchases along the way. 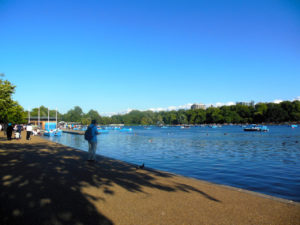 We headed off to Hyde Park in the afternoon, where we rented a paddle boat.  It was incredibly relaxing.  When I was reading the rules, I saw one that said not to pick up people while you were on the boat, which I laughed at… except we sort of ended up breaking that rule?  A group of four British people bumped into our boat, like you sometimes do, and then one of them jokingly said, “do you want to race?”  At which time Sona pointed out the unfair numbers.  And one of them goes, “I’ll even it out!” and casually hops into our boat as his friends are literally floating away.  So we had to follow them and return him to his friends.  Also at the park, an absurd amount of rich people cars.  We saw three lamborghinis in a row.  Talk about wealthy! 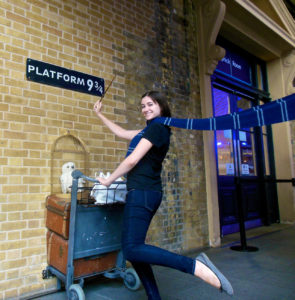 Monday morning, Sona had to go to work, so I was on my own for most of the day.  I began my day by heading to Kings Cross and being as touristy as possible at Platform 9 ¾.  I waited in line for… let’s just say a long time… so that I could take the obligatory picture at the station with the wand and the scarf and then I went shopping and bought some chocolate frogs and a shirt.  I’ve been a huge fan since first grade, it was a pretty exciting time for me. 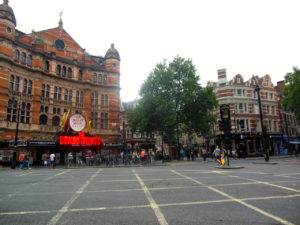 After, I stopped by St. Paul’s Cathedral, but I didn’t want to pay the entrance fee so I just took a few pictures in the lobby and then had lunch at a nearby restaurant.  Then I headed to Charing Cross.  I wandered through parts of Chinatown and went into bookstores, and just generally enjoyed the atmosphere.  There was this amazing bookstore called Foyles, and I spent more time than I’d care to admit in there as well.  It had a huge foreign language section.  Fun fact, the latest redesign of the first French Harry Potter book features Bran Castle, also known as Dracula’s castle, located in Romania.  Which I have been to, so I guess by extension I’ve been to Hogwarts?  Let’s go with that. 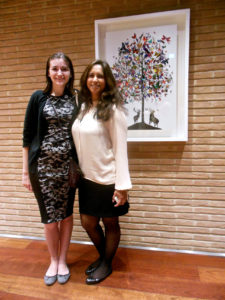 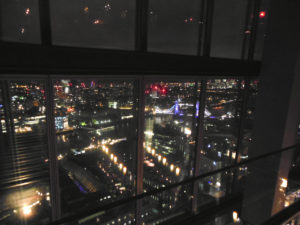 That evening, Sona and I went to Billy Elliot in the West End.  What a fantastic choice!  The dancing and singing was outstanding.  I love musicals.  After the show, we headed to the Shard.  We had a drink at the Aquashard- probably the most expensive drink of my life, Sona’s actually had squid ink in it.  The views were unbeatable.  It was up on the 33rd floor, and looked out at the Thames and the London Bridge, and everything sparkled at night.  The whole evening was the definition of luxurious and it was all amazing.  The perfect end to my trip.

So, three days later, I’m totally in love with London.  Head over heels.  My next post will feature my time in Marseille, so stay tuned!