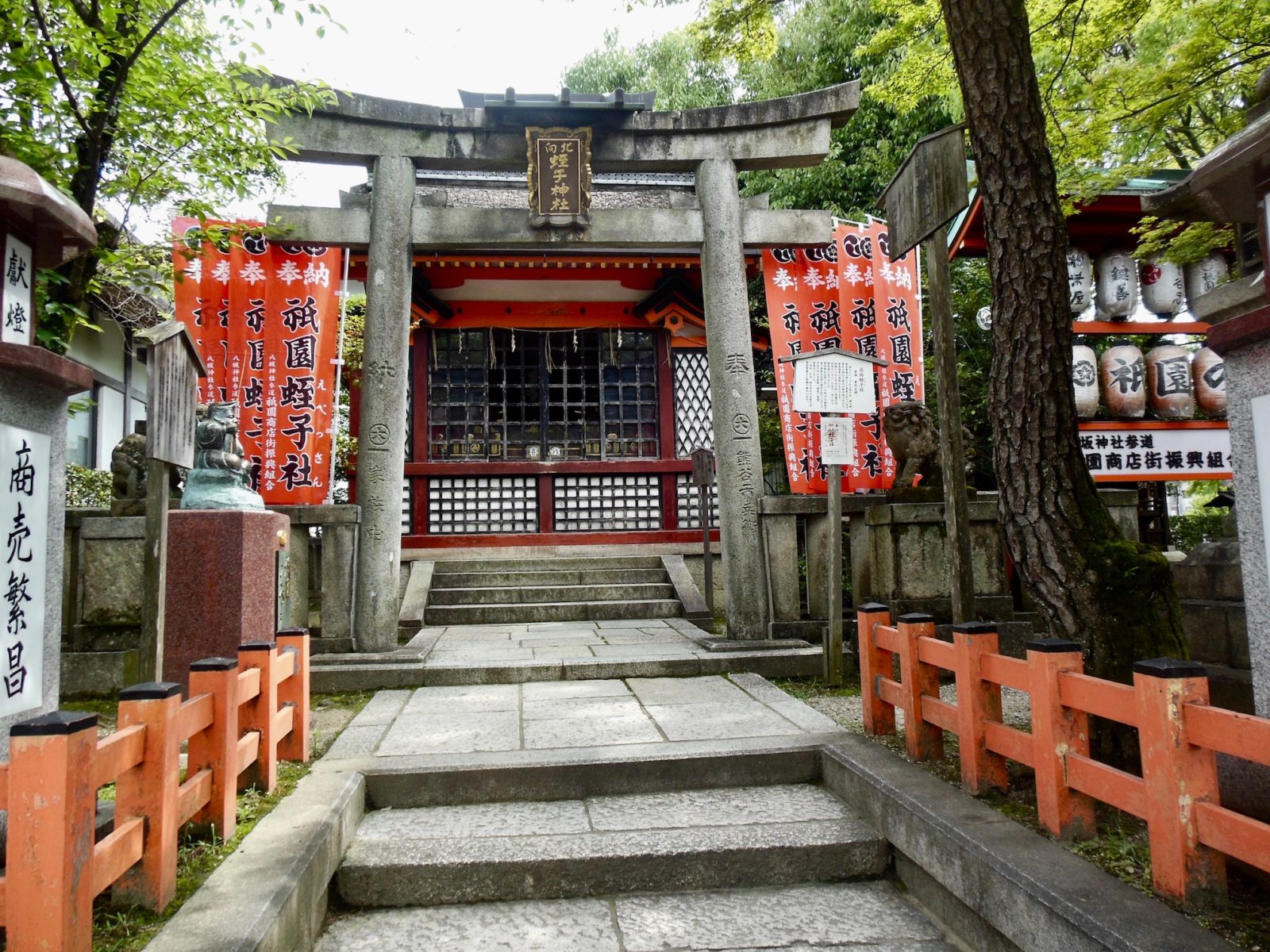 Before coming to Kyoto, I knew approximately two things about it.  The first was that it had about a million temples, and the second was that it’s on almost every list ever for “most beautiful cities in the world.” 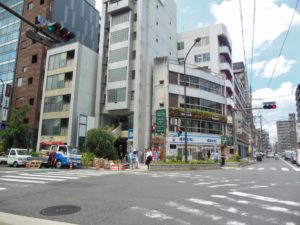 Real talk.  Kyoto itself is not beautiful.  The buildings are boxy.  The surrounding areas of Kyoto are beautiful, but do not expect it to look like the pictures on Google images right when you get off the train.  That is not what most of Kyoto looks like.  Most of Kyoto looks like the two pictures above this paragraph.  I loved my time in Kyoto and saw some wonderful things, but my expectations were way off when I got there.  Mostly because everyone keeps telling me how beautiful it is.

My first day was sort of a walking tour of temples I wanted to go to that were all reasonably close together according to Google maps.  Granted, their walking time doesn’t add the temperature or humidity to their calculations, which is something I should think about next time I’m putting together my own walking tour…. I started at Sanjusangen-do.  The distinguishing feature is one thousand life-sized statues, which is amazing.  They don’t let you take pictures inside, but I enjoyed my time there thoroughly and would highly recommend it.  It wasn’t too crowded when I went. 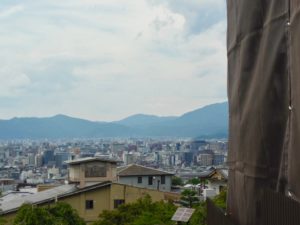 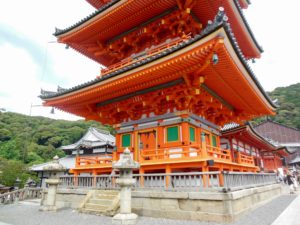 From there, I walked to Kiyomizu-dera.  On the way, I actually ran into a friend from college and his girlfriend, which I consider to be the least likely thing that’s ever happened to me.  Seriously, what are the chances?   The walk was up this massive hill, and I had to stop for water at one of the many vending machines.  Kiyomizu-dera is one of the most famous temples, although personally I thought it was a bit overrated.  Granted, the veranda was under construction, so that did put a damper on it.  But there were also tons of tourists, as you can see from the picture, and I’m not sure it was significantly cooler than any other temple I saw. 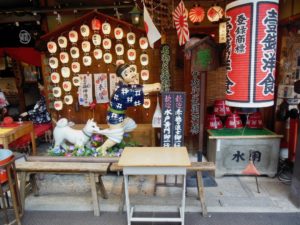 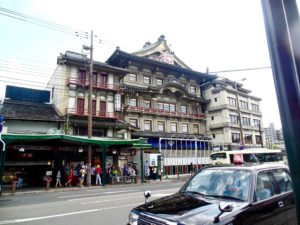 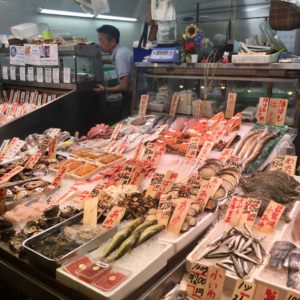 I spent the rest of the afternoon walking through the center of Kyoto, including the Nishiki Market, which is cool.  It was nice to see that part of the city, since the rest of my time was mostly spent going to specific temples in what would be the suburbs of any other city. 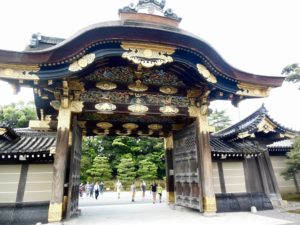 The next morning I did a half day tour that took me to a couple different temples, including one that’s a lot harder to get to on public transit.  Of course, I was actually late to meet the tour group because I got lost trying to find the meeting place.  I ended up showing the address to a random Japanese girl, who grabbed my hand and led me to the place I was supposed to go.  Since I had missed the bus, the tour company put me on a taxi and had their colleagues meet me out front.  We started with Nijo Castle, which was a dark horse favorite in Kyoto.  It was where the ruler of Kyoto used to live, and it has what they call “nightingale floors” that were designed to make noise to warn people about intruders.  When people are walking on it, it legitimately sounds like a bird singing, which is one of the coolest things I’ve ever seen.  They also had stunning gates as part of the defense walls.  Unfortunately, I could not take pictures inside. 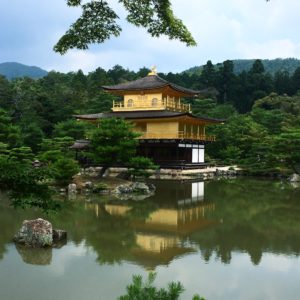 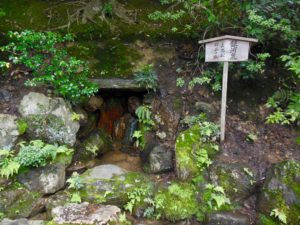 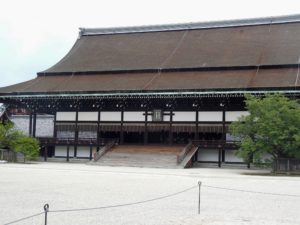 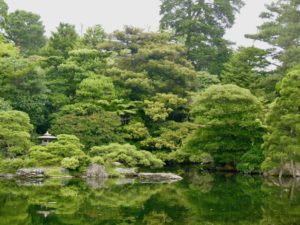 We went to Kinkaku-ji next, which is the Golden Temple.  It is covered with gold leaf, so it is fairly stunning.  This one was another place with a million tourists.  Worth seeing, but mostly get in, take a picture, and get out.  Our third stop was the Imperial Palace, which is where the emperor used to stay when he came to Kyoto.  Now, according to our tour guide, he just stays in a hotel.  But it looked cool and official, and the gardens surrounding it were beautiful.  The tour dropped me off back at Kyoto station, and this was the afternoon where I went to Nara. 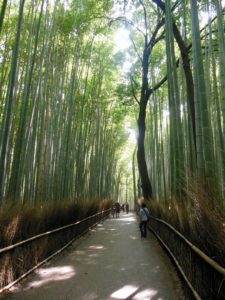 The next morning was all about gardens!  I went to the bamboo forest first, which I would highly recommend.  Especially in the morning when no one else is there, because tourists are the worst.  Yes, I see the irony.  I stopped in Tenryu-ji, which is known for having a great zen garden.  While I was there, the hydrangeas were blooming. 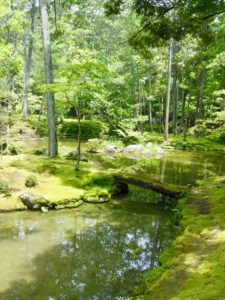 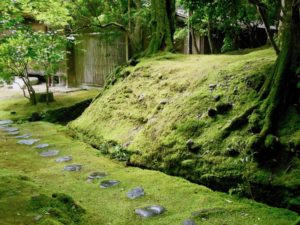 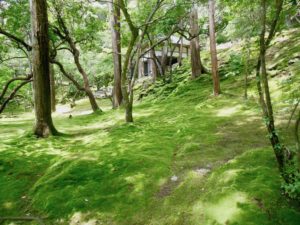 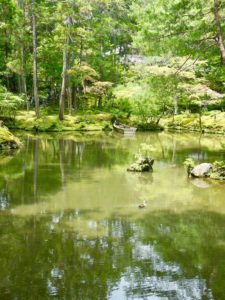 After that, I went to the moss garden, Saiho-ji.  I got interested in this one when I read that they have an application process to protect the moss.  To get there, I was going to take a bus.  I tried to figure out the bus routes, but got very confused.  In fact, I looked so confused that a taxi drove past me, stopped, reversed, and opened the door for me.  So I took the taxi.  They’re very nice in Japan.  In fact, while I did take a bus successfully later during this trip, I’d recommend those over walking or taking buses to certain temples.  Anyway.  The moss garden was amazing.  My parents were skeptical when I told them I was going to a moss garden, but it felt like walking through a fairy tale.  Before seeing the moss, they required everyone to participate in a religious ritual.  For that, I sat in a room while everyone around me chanted in Japanese.  Quite the experience, let me tell you. 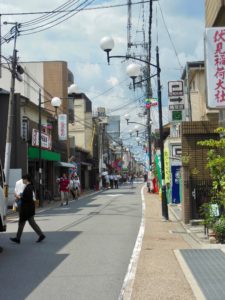 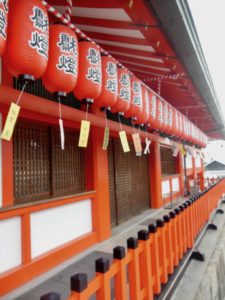 After I finished at the garden, I went to one of the most famous places in Kyoto.  Fushimi Inari Taisha.  It’s like a hallway of red gates that goes up a small mountain in the southeast part of Kyoto.  When I got there, there were about a bazillion tourists.  I ended up hiking about halfway up the mountain just to get to an area where I felt more alone.  Once I got out of the tourist throng, though, I loved it.  One of the coolest parts of Kyoto for sure.  I thought about climbing the whole mountain, but the humidity was brutal.  Definitely a great way to close out my time in Kyoto!