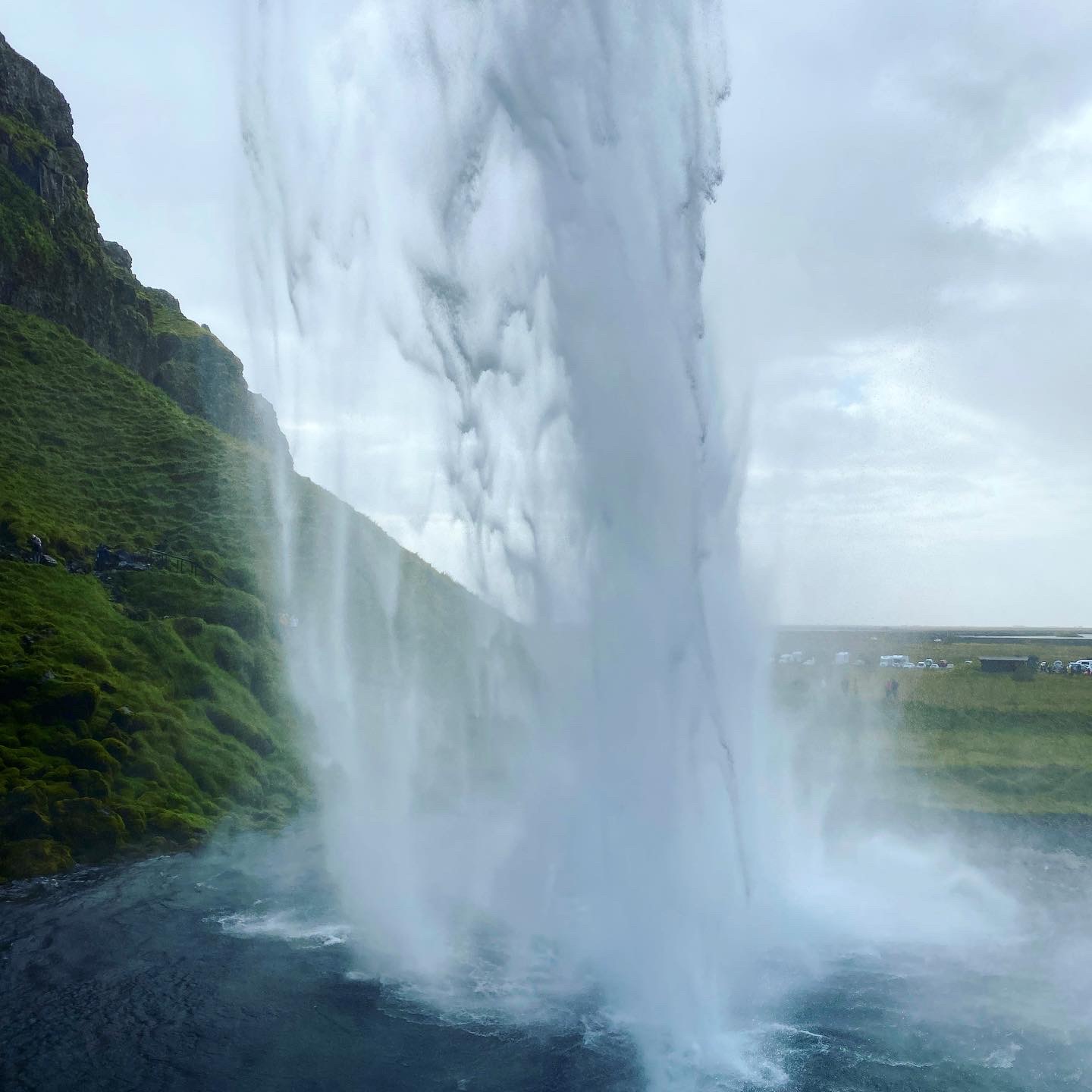 I’ve wanted to go to Iceland for ages. It was starting to get popular while I was on study abroad, and living in Scandinavia made me particularly aware of it. So when Sam and I were looking for travel options for a week long trip, it was one of the first places that came to mind!

We drove the Ring Road in a week. Several people I talked to said that was too fast, which is dumb. Could I have spent more time there doing tours? Of course, it would have been fun. But it was super doable in a week, and no one day was too much driving. It’s such a small country compared to the United States. I don’t think we had a day over about 4 or 5 hours of driving, and it still felt like a relaxed experience.

We flew into Reykjavik and had a day of exploring and trying to recover from jet lag. I didn’t sleep well on the plane and spent the morning exhausted, but I still felt like we got a good initial sense of the city. It felt rather similar to Copenhagen, with nice pedestrian streets in the city center.

The next day was the Golden Circle and driving down to Vik! The Golden Circle is a famous tourist trail of attractions near Reykjavik, including Gulfoss, Thingvellir National Park, and Geysir, which is where the word geyser comes from. Around Geysir it started pouring rain. We lucked out overall on weather, but every so often we would get caught in a freak storm. Iceland is very unpredictable when it comes to weather. The locals often say if you don’t like the weather, wait five minutes.

We also visited Kerid Crater, which was a beautiful walk, and Seljalandsfoss, which is my favorite of the waterfalls we saw in Iceland! The trail goes behind the waterfall, which is a magical experience. From there, we made our way down to Vik on the southern coast.

Vik is well known for its black sand beaches and proximity to the glaciers! There are tons of things to do in this area, and if we’d had more time, I would have tried to spend more of it in this region. There’s a hike out to an abandoned plane that we passed but didn’t have enough time for, but I guess I’ll just have to come back!

The next day was a major highlight for me – we went hiking on a glacier! It was one of the best travel experiences of my entire life. We met up with our guide and got set up with helmets and crampons and ice axes. I’ll admit, I got concerned when they handed us the axes. This was listed as easy on the tour website, did I get myself in over my head? But no, it was easy to walk on the glacier, and I never felt unsafe. The only advice I have is to really be confident walking in the crampons. Some of the other people on our tour kept walking gingerly, and at that point it was less safe because they weren’t letting the spikes dig into the ice. This particular glacier rests on a volcano. The black veins of ash have helped protect it and mean that it is melting slower than some of the other glaciers in Iceland. Still, it is melting, and they showed us where it used to end a few years ago. Sad to see the results of human activity on such beautiful nature.

We also went to the glacier lagoon a few hours away. While we were there, we got to see seals! But the highlight of that area was called Glass Beach, which is an area where pieces of ice wash up along the beach and it is absolutely beautiful. From there, we headed a little farther east to our Airbnb. As soon as we got past Jokulsarlon Glacier Lagoon, there was a major drop off in the number of tourists! There were not many people out on the east coast, which is a shame, because it is gorgeous.

There weren’t many places to stop or specific sites once we got to the east coast. Instead, it’s just a stunning drive along the coast and through the fjords. We stayed at an Airbnb at a tiny town, where the nearest grocery store was nearly half an hour away, and it looked out over one of the fjords!

One of the strangest quirks about an Icelandic road trip were the one lane bridges. This is something I’d never really encountered before, but the south and east had lots of them. It was fine during the day but a little scary at night – I don’t love going over a bridge not knowing if there’s someone waiting on the other side to collide with me head on.

Our first real stop of the day was Dettifoss, which is decently far off the Ring Road itself. It’s the second most powerful waterfall in Europe, and it was very impressive! It’s part of the Diamond Circle in the north part of Iceland. We went there and to Lake Myvatn, but with more time, I would’ve liked to hit the whole loop. Our destination, though, was Lake Myvatn, which is packed with cool things to see!

We started at the Hverir geothermal area, which was gorgeous and had this orange soil around the geothermal features. We also went up to Viti Crater, which was very windy and very turquoise and we had to drive past a power station to get there. We also hiked up the Hverfjall Cinder Cone, which was a cool look out point. It was also very windy. We were lightly worried about being blown off the edge. The last stop of the day was the Dimmuborgir lava formations, which had a nice path that we could wander through for as long as we wanted. After getting dinner in the area, we drove on to our Airbnb in Laugar so we could get a head start on our next day.

On our next day, we started with our last official waterfall of the trip, Godafoss. Iceland has so many waterfalls that I was pretty selective on what we stopped for – I didn’t want us to get “waterfalled out” so to speak. Godafoss is a horseshoe-shaped waterfall and was definitely worthy of inclusion, the multiple lookout points gave us a great perspective on the landscape. It was still a fairly quick stop and we were on to Akureyri!

Akureyri is the second largest city in Iceland. We started with our COVID tests at a drive-through clinic. This was at an annoying time when the US was requiring COVID tests for all re-entry, but before they restricted it to one day before travel so we were able to do ours a few days in advance. Predictably, getting tested in Iceland was very efficient.

Our travel logistics done, we were able to explore the city, which was super fun. One interesting cultural quirk of Akureyri is their parking system. Most residents have clocks where they set it in the window with the time they parked, and the zones are all based on how many hours you can stay in any one space. As foreigners, we didn’t have a clock, so we just had to write our time on the back of a piece of paper. Sam tried an Icelandic hot dog and we stumbled on some sort of festival for high schoolers where they were all dressed up in team outfits like superheros and Pippi Longstocking.

We couldn’t stay forever, though, because our Airbnb was still about 2 and a half hours away. After a beautiful drive, we found ourselves on a farm. The host told us to be careful on the road, because “it can be sheeps on both sides,” which is our new favorite saying and applies to a surprising number of situations.

On our last full day in Iceland, I’d scheduled one more tour! We had a three hour drive to get to Thingvellir National Park so that we could get to our tour and snorkel in the Silfra Rift. Outside of the glacier tour, this was the other thing I’d been most excited about. The Silfra Rift is the place between the American and European continental plates, and you can swim through it and touch both continents at the same time, which is amazing. Our guide suited us up in a truly comical amount of neoprene, including neoprene lobster-claw-looking gloves, which was good because it was absolutely frigid water. He told us we should try taking a sip of the water and it froze my lips to the point where it was hard to get the snorkel resituated in my mouth. But almost freezing was 100% worth it, because it was gorgeous clear water and I had a magical time swimming through the place where the continents meet.

Overall, I couldn’t have asked for a better birthday trip! The only thing that could’ve made me happier is if we’d seen the Northern Lights – I have terrible luck when it comes to trying to spot them, every time I’ve been somewhere it would be theoretically possible, the sky is overcast. But I guess I’ll just have to travel back above the Arctic Circle, how terrible….