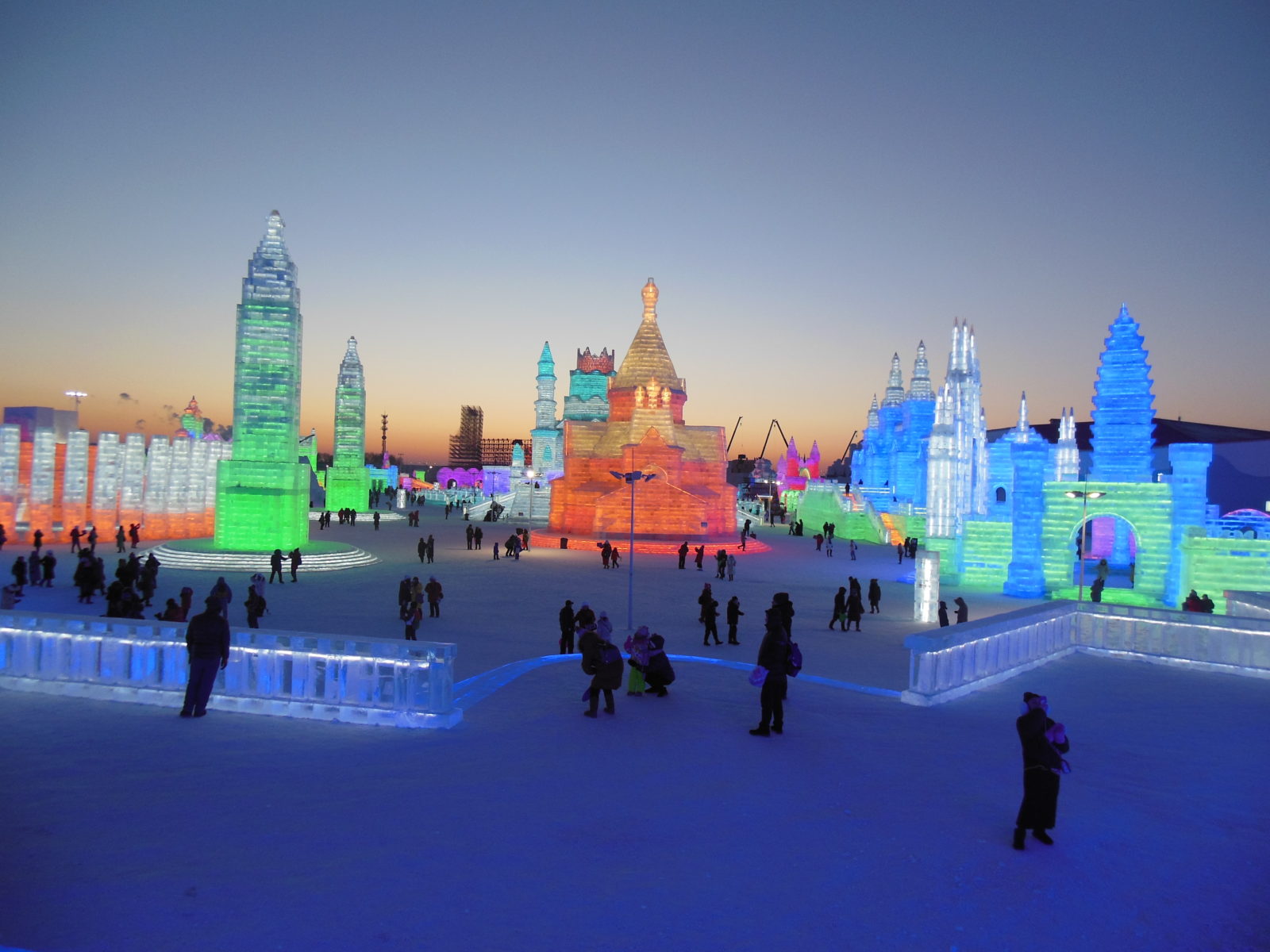 From Beijing, I took a night train up to Harbin to go see the Ice Festival!  This was the first time I had ever been on a night train, and it was my first long distance train trip in China.  This particular train station had no signage or announcements in English, so I got there early so that I could observe and ask around if needed.  It turned out to be pretty straightforward.  While hoisting myself up on the top bunk was an adventure, I ended up sleeping very well as the train rocked me gently back and forth. 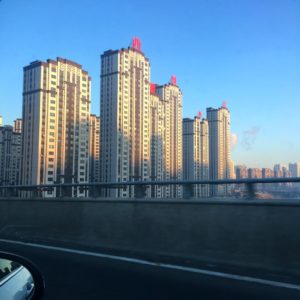 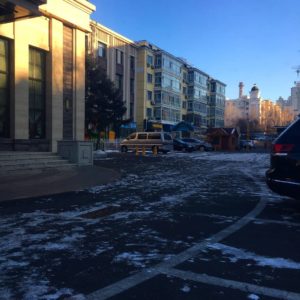 I had hired a driver in Harbin, so I met up with him in the train station.  He didn’t speak any English and I didn’t speak any Chinese, so we communicated through Google Translate.  He drove me into the city to pick up all my tickets for the day and I got my first look at Harbin.  The architecture blended Chinese and Russian styles, with some buildings including Cyrillic signs with the standard Chinese.  I was blown away at the size of some of the apartment buildings, which were absolutely massive.  It was also brutally cold while I was there, at -10 F and a “feels like” temperature of -24 F. 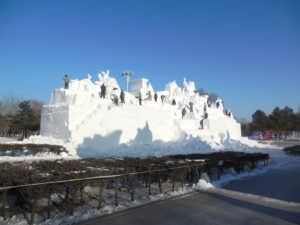 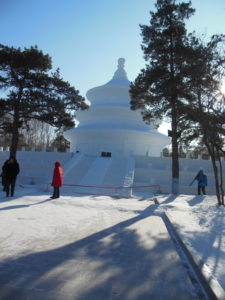 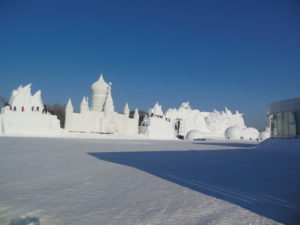 Our first stop was Snow World, where there were giant sculptures made out of snow.  Some were still being constructed, and there were galleries of smaller sculptures that were designed by students for a competition.  It was cold in a way that I have rarely felt before, and I often had to find a building to go inside to warm up so that I could feel my legs again.  Still, the sculptures were stunning.  I think their snow version of the Temple of Heaven was nearly the size of the real one. 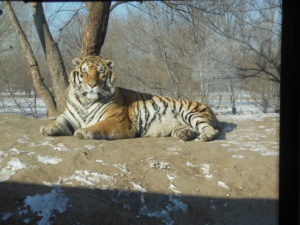 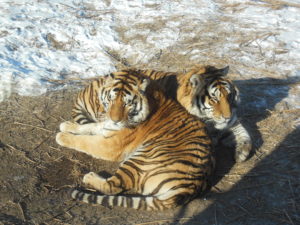 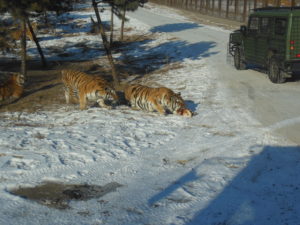 From there, we headed to the Siberian Tiger Park.  I had researched this before I came and saw online debates about the ethics, although for the most part it felt like the night safari my family and I did at Disney World.  Except the bus had a cage over the top and the animals were all tigers.  I couldn’t understand what the guide was saying, but at one point people started passing up money.  Eventually, I understood that they were buying live animals to feed to the tigers.  A small Jeep-like vehicle came into the enclosure and tossed out live chickens, which the tigers killed and ate in front of us.  After the bus ride was done, we went to a sort of caged walkway.  Some people bought meat to feed the tigers through the cage, although to me that was the part that did cross the line ethically so I just watched. 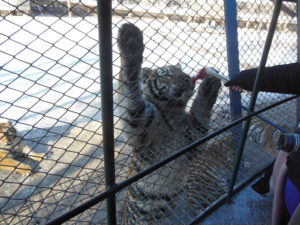 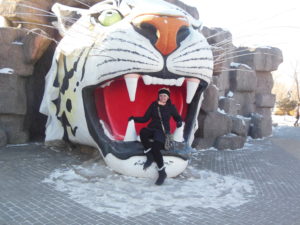 After the tigers, we went to a local Chinese restaurant.  My driver was confused about my vegetarianism and struggled to find dishes to order.  We had lunch with another Chinese guide, Toby, and tour participant, Sharon, who is a South African teaching English in China.  She had also lived in Oman and Bahrain to teach English.  We talked about traveling and China over our food.  Lunch was interesting.  I tried a corn soup (great), a dried tofu pasta dish (meh), a tofu stew (good flavor, weird texture), and the potatoes from a chicken and potato dish (delicious).  I also tried a Harbin beer that was developed by the Soviet Union, which I liked quite a bit.  Food was served family style. 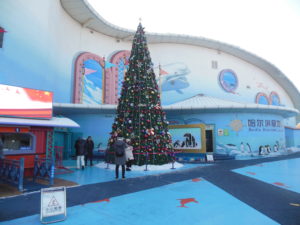 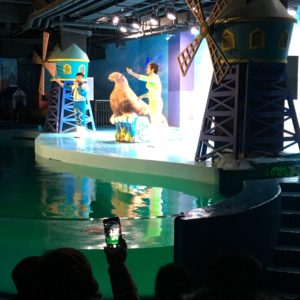 After lunch, we headed to Polar Land and I watched the sea lion show.  They had a walrus that danced, played the harmonica, blew a balloon, whistled, and did sit ups, which was quite impressive.  Then the sea lion came out and did very impressive jumps and caught rings thrown by the audience.  It was a quick trip, because I was anxious to get to the main event: the Ice Sculpture Festival. 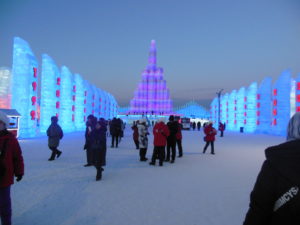 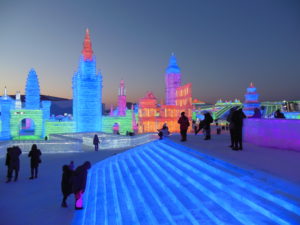 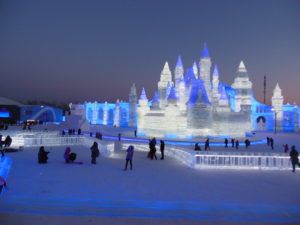 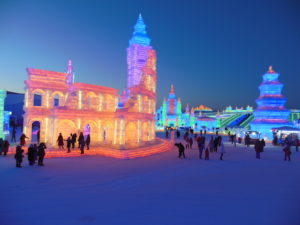 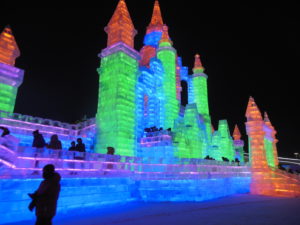 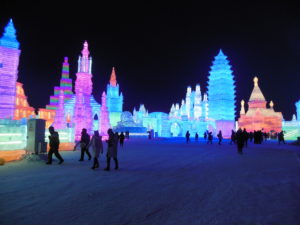 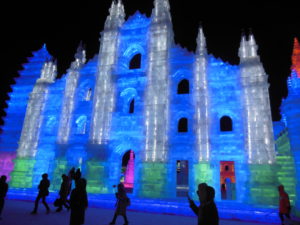 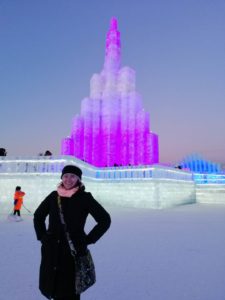 It was incredible!  Possibly the most magical place I’ve ever been.  They had built a Colosseum and Duomo out of ice, and castles with turrets and slides.  Many of the buildings were designed after famous Chinese buildings.  All of the lights changed color, creating stunning designs.  I met up with Toby and Sharon there, and Toby told us the whole festival was constructed in 15 days!  They have to wait until the river is cold enough to harvest the ice, apparently.  The whole thing was completely worth the effort it took to get there.  After the festival, I went back to the train station so I could catch my sleep train back to Beijing.