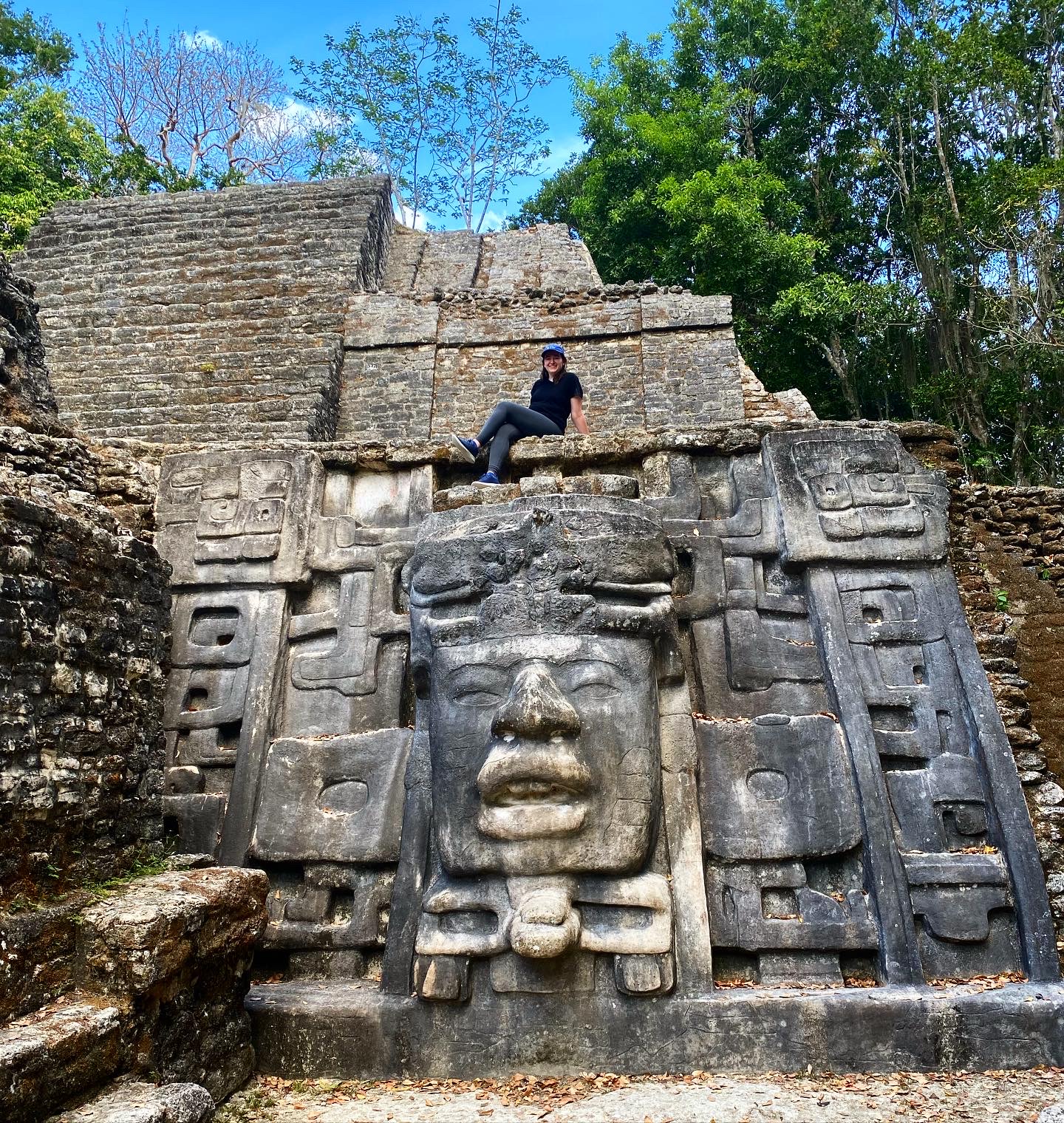 Before I go back to my irregular and unscheduled travel content, I’d like to say that I am incredibly thankful to everyone who worked on the vaccine, and I feel so lucky every day to live in a country where I was able to get a dose so quickly. Science is amazing, isn’t it?

As soon as I knew when I would be two weeks out from my second shot, I planned a trip. I mean, I went to see my parents first, but then I also met up with my college roommate in Belize for a week, which was incredible. I love flying, so I’m excited any time I get to be on a plane, and this one was an exceptionally beautiful flight. The second leg of my trip was from LAX to Belize City, and flew over the entire length of Mexico, which is stunning, and obviously I need to figure out a trip down there at some point soon. I also had to laugh, because in LAX I ordered a glass of wine and in a “screw it, I’m on vacation” moment, asked for a double pour and ended up with a truly enormous adult sippy cup of wine to consume on my layover. Needless to say I was pleasantly buzzed and very happy.

Riya and I booked a tour through Intrepid, who arranged our hotels, transit, and most of the activities we participated in, which was nice to have all of that handled. Our guide, Fidelio, was awesome. Our first night was on the outskirts of Belize City. Belize City is known as…. well, not the safest area in Belize, and everything I had read said not to stick around, as there aren’t many cultural attractions either. We ended up eating dinner in our hotel and I tried panades, which are a Belizean empanada and absolutely delicious.

The next day was packed with activities! We headed off to the Crooked Tree Lodge, which is in the middle of a bird sanctuary on the edge of a lagoon. Once we arrived, though, we had a quick temperature check and we were off again, on the way to visit Mayan ruins!

The Lamanai Archaeological Reserve is only accessible by boat, so we took a 90 minute boat ride down a river each way to get there. It was gorgeous. There were sections full of water lilies, birds soaring over perfect mirrored water, orchids growing out of trees, and a baby crocodile sunning itself on a log. We also passed a Mennonite community, and our guide talked about how they had moved to Belize and what an important role they play in the agricultural industry. One of the most interesting moments was when we passed a boat of young Mennonites who were using their phones – apparently, they’re the rebels in the community who want to use technology, and so they go hide out on the river to secretly use their phones away from the rest of their families!

Lamanai was amazing. We were nearly the only tourists there, unless you count the Mennonites, who apparently came there as a spot to have dates and picnics. What I was most surprised about was that we could climb the pyramids! I would have expected them to be off limits, but our guides at Lamanai and at later Mayan sites advised us that we could go anywhere and explore the entire site. We also spent time walking through the jungle and saw all kinds of plants, including oregano, rubber, turpentine, and allspice, which, honestly, I didn’t expect to see. When our guide had us smell and it reminded me of gingerbread cookies, it felt so out of place in a tropical location. A few other highlights of the jungle walk: a plant called horse balls, which were large green pods that produced a glue like substance, and a green and purple plant that they called Moses in a Boat, because they looked like little boats with white flowers inside.

The coolest land animal encounter was with howler monkeys! We saw them a few times (and never heard their distinctive howl) but this lime tree was the closest we got to them. There was a whole group and they sat eating comfortably while we took pictures and observed.

The next morning, we took a boat ride through the Crooked Tree lagoon. Our guide Fidelio is an avid birdwatcher, so it was great to be on the boat with him, because he was excited to explain all about the birds! We saw vultures, herons, hawks, kingfishers, and my personal favorite of the day, limpkins, who were the oddest looking birds we saw there.

From there, we headed to San Ignacio. Fidelio warned us that we could get slowed down on our way there – apparently, Belize was experiencing protests from the teachers due to potential wage cuts. He explained a bit about the political and economic situation there, and while we didn’t experience any of the protests first hand, it was helpful to have a bit more context of what was going on in the situation.

When we got to San Ignacio, we headed first to Cahal Pech, which were more Mayan ruins. Those were super close to where we were staying, so easily accessible to any traveler staying in town! Once again, we were the only tourists there, which meant we got to explore on our own.

The next day, Riya and I had arranged our own thing. We ended up on a private tour to the ATM Cave! ATM stands for Actun Tunichil Muknal, which is Mayan for the Cave of the Stone Sepulcher. It was absolutely amazing! So cool, and I believe it’s a totally unique experience. I’ve never come across anything else like it in all my travel research. There’s a short and fairly easy hike through the jungle with a few river crossings, and then you swim into the cave and climb over rocks and wade through it until finally, you climb up on a ledge into a giant cavern. And this is where it crosses from an ordinary cave adventure to something incredible. In the cavern, there are perfectly preserved pots and artifacts from Mayan rituals. The Mayans also used this cave to perform human sacrifices. The region experienced long periods of drought towards the end of their civilization there, and as things got more desperate, the prevailing theory is that they tried various human sacrifices to try to appease the gods that controlled rain. Our guide even let us hold one of the axes used for sacrifices in 950 AD. We weren’t allowed to take pictures due to previous bad tourist behavior – someone dropped a camera on a skull, which is appalling – but I cannot express enough how much I would recommend it if you’re in the region.

If this is something you are considering in Belize, I would direct you to this website, which I thought did a great job summarizing what it was actually like – navigating the various warnings and recommendations on tour sites and blogs is a bit difficult when all you want to know is how hard it legitimately is. I found it easier than I expected, given all the descriptions of it being an “Indiana Jones-style adventure.” Sure, it would have been easy to twist an ankle if we weren’t careful, but the swimming was easy and our guide was great about warning us and letting us know about the footholds for more difficult sections.

The following day, we were off to the islands! I’m breaking that up into another post, though, so stay tuned for the snorkeling pictures 🙂