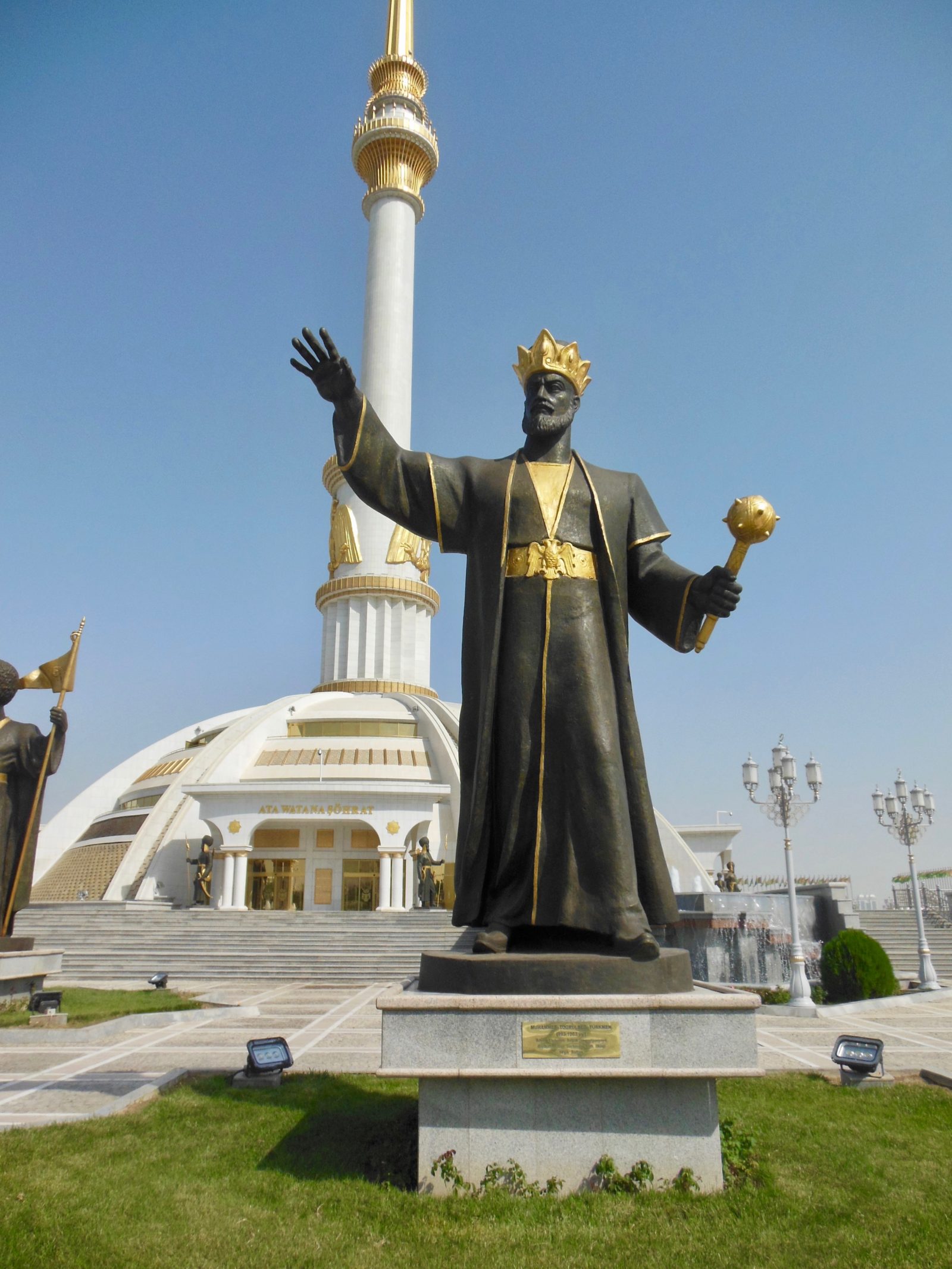 How can I begin to describe Ashgabat?

Almost every building in Ashgabat is built out of white marble, imported from Italy.  Everything is designed down to the smallest detail, from the lampposts to the telephone booths to the bus stations, and nearly every park and roundabout has a stunning monument of some sort. The government buildings are often themed to what their purpose is, like how the Department of Education looks like a giant book and I think the one for Energy or Natural Gas looks like a giant lighter. The stadium is recognizable from anywhere in the city, because it’s shaped like a horse. The airport (which is gorgeous, by the way) looks like a flying bird on the outside.

Ironically, the aspect of Ashgabat that felt the most unusual was the lack of people. When I started writing this post back in October, that was something that I had planned to comment on extensively. We could cross six lane streets and not see a single car. And then when COVID first hit, suddenly it felt like the whole world was like that. Nevertheless, for a pre-COVID city, it was shocking to go to parks and restaurants and malls and not see anyone around. We did spend some time in a mall that had locals, but almost at all of the monuments and museums, we were the only people there.

One of my absolute favorite places we visited was the park in the pictures above. See if you can spot me in that picture. The scale of the monuments is next level. While we were here, we got to watch a changing of the guard ceremony – I’m sad I didn’t get the chance to photograph or videotape it! They’re very strict about photos of anything involving the military, which is fair. But it was pretty amazing. The man twirled the gun like a baton.

This is the largest indoor ferris wheel in the world. I know, weird flex, isn’t it? But we arrived in the middle of a hot and hazy day to find it empty and turned off. We all sort of shrugged and got ready to get back in the bus, but our guide said they would turn it on just for us. And he went and got the employees, and sure enough, they ushered us in and turned on the ferris wheel.

There’s the view from the way down. There was an arcade at the bottom of the ferris wheel, and that was all off too. Our guide went to get the employees again and they turned it all on for us. We played a few rounds of air hockey, and then he asked us if we wanted to do bumper cars. “Sure,” we said. Out came the employees again. Is this what it feels like to be a movie star?

One of the other world records held in Turkmenistan is the largest handmade carpet. We went to the Carpet Museum while we were there. I wasn’t sure what to expect – a whole museum of rugs? But it was amazing. Our guide talked about how each design represents a specific region, and taught us to recognize where the patterns come from. The craftsmanship is very impressive, although sadly I could only take pictures in the final room.

One last picture to highlight before the gallery – this one, taken not by me but by someone else on my tour group. This is a bottle of water that a waiter brought out at one of our dinners.

Images speak louder the words, so here’s a selection of pictures I took while I was in Ashgabat. It’s not an easy place to go, but I’m so glad I got to have even a small glimpse into one of the most private and unusual countries in the world.