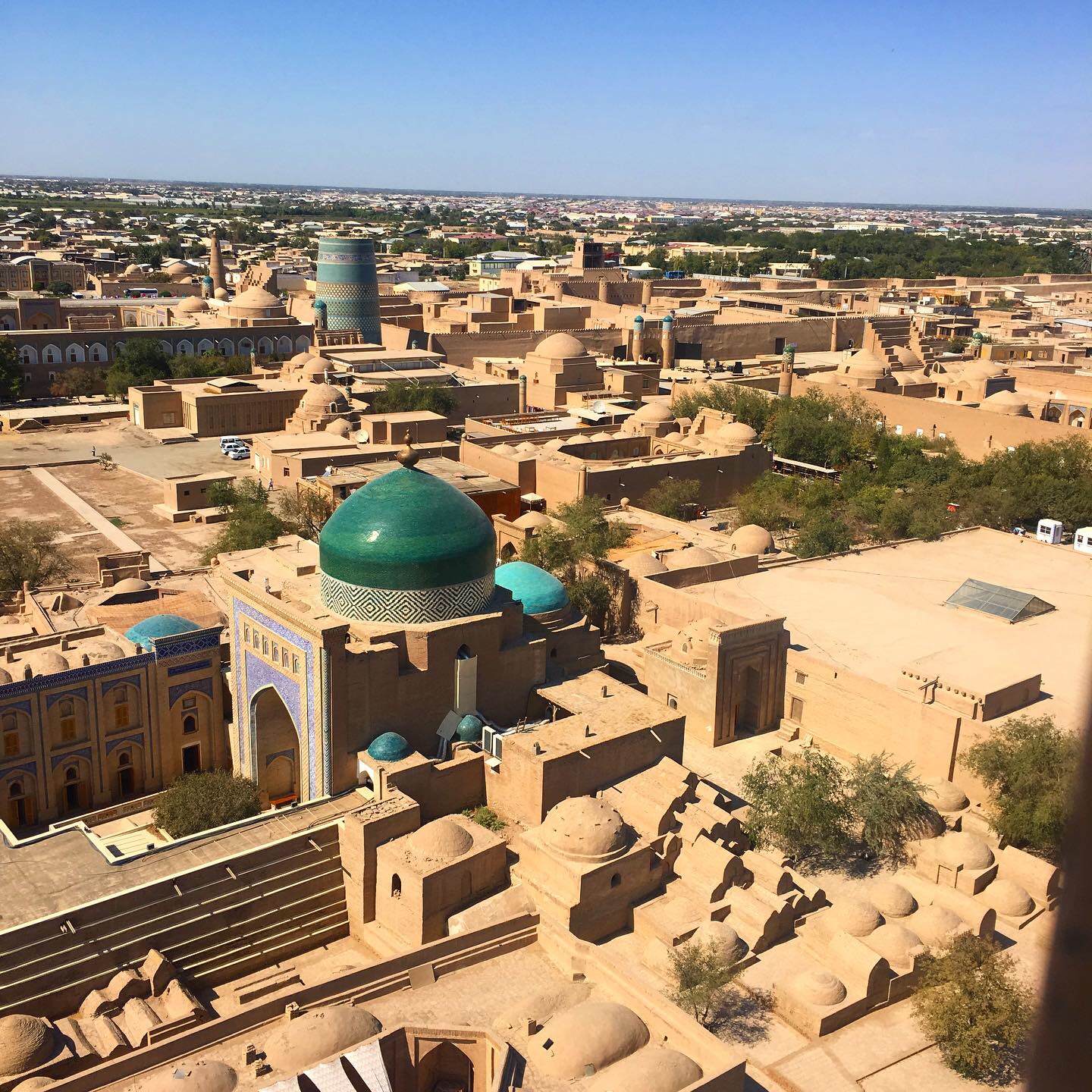 When I told my family, friends, and coworkers that I was going to Central Asia for vacation, the number one response I got was “…..why?”  One of my coworkers helpfully added that Central Asia is “the Midwest of the world.” And so I found myself having to explain why I wanted to go to this particular region of the world. Again, and again, and again. Somehow, a lot of people haven’t realized how fascinating it is. And now that I’ve gotten a tiny taste, I know I’ll be back at some point!

My journey started with a lot of long layovers.  It seemed like all of the options to fly there either had a layover that was about 45 minutes or 7 hours, so my choices were to miss a connection or feel as though I was living in the various airports I went through.  Nevertheless, I finally ended up in Tashkent after an absolutely stunning early morning flight in which I watched the sun rise out my window.  The whole desert lit up in this amazing pink glow and I could see all these patterns that the wind had traced into the sand.

Landing in Tashkent, I had no idea what to expect. I’ve seen pictures of the old Silk Road sites on Instagram, but never the capital. It was very different than I expected, with wide open boulevards and so many parks and green spaces. Even the airport had a garden in front of it. I met my driver and headed to the Hotel Uzbekistan, pictured above, which is apparently where old Soviet heads of state used to stay when they visited. It was early, so I couldn’t check in yet, but I did some exploring.

The hotel was right across the street from the Emir Temur square, which is very central and a great place to start my visit. I wandered around through some gardens and tried to go in several cafés, but nothing seemed to open until about 10 am there. So instead I just took lots of pictures and took it all in. At one point, a soldier asked me to delete one because I took a picture of a government building without realizing it. Oops.

I ended up taking a long nap once my hotel room opened up. I wish I could say I explored more, but the 11 hour jetlag really hit me harder than I expected. Instead, I woke up basically just in time to go meet up with my tour group. We all went out for dinner at a place a few of them had found the day before, which was a nice introduction to everyone!

The next morning we were off to Khiva. We had an early flight, which was a bit of a cluster. There was a snafu with who had the tickets and it ended up being a stressful morning as we rushed through security. Nevertheless, we made it to Khiva, where we found that our hotel had opened the literal day before. When I got my room key, they were in my room still drilling coat hooks into the wall, which was a bit wild.

Khiva is one of the magnificent Silk Road sites in Uzbekistan. They’re big proponents of restoring their monuments to look as they did in the past, which is a really cool experience. It feels like you’re actually walking through the city as it existed, with markets springing up on the sides of every walkway. We had tours both of the days we were there, and our guide took us through various exhibits about life in the region. My favorite fact I learned there is that Uzbekistan once actually had money made out of silk!

Everywhere we looked had these magnificent mosaics. The amount of detail that went into the tile work was amazing. We toured a wood carving area and a carpet making area as well and watched them use methods that have been used throughout history. The best times to be in the city were right around sunset, when everything lit up in a soft golden color. I also ended up climbing the highest minaret tower in the city, which had the best views (although it did make me extremely sore for the next several days)!

On the second day we were there, it was my birthday! Our hotel had figured this out when they registered my passport, which I guess is the advantage to being one of only 9 guests, and they actually threw me a party. They brought out a cake and champagne, which was lovely. There was also a dance festival going on at that time, so we tried to go watch it, but it seemed as though they were having technical difficulties, so we didn’t get the chance to see much. Still, walking around the city at night was very cool.

All in all, Khiva was wonderful. It’s very much still developing its tourism infrastructure. Ours was not the only hotel under construction when we arrived, and a lot of the buildings around the old city had been knocked down to make way for new hotels and restaurants. I imagine it will be very different in a few years once it’s more built up. I’d still like to return to Uzbekistan to see Bukhara and Samarkand some day, but I’m so glad I got a taste of the country through Tashkent and Khiva!