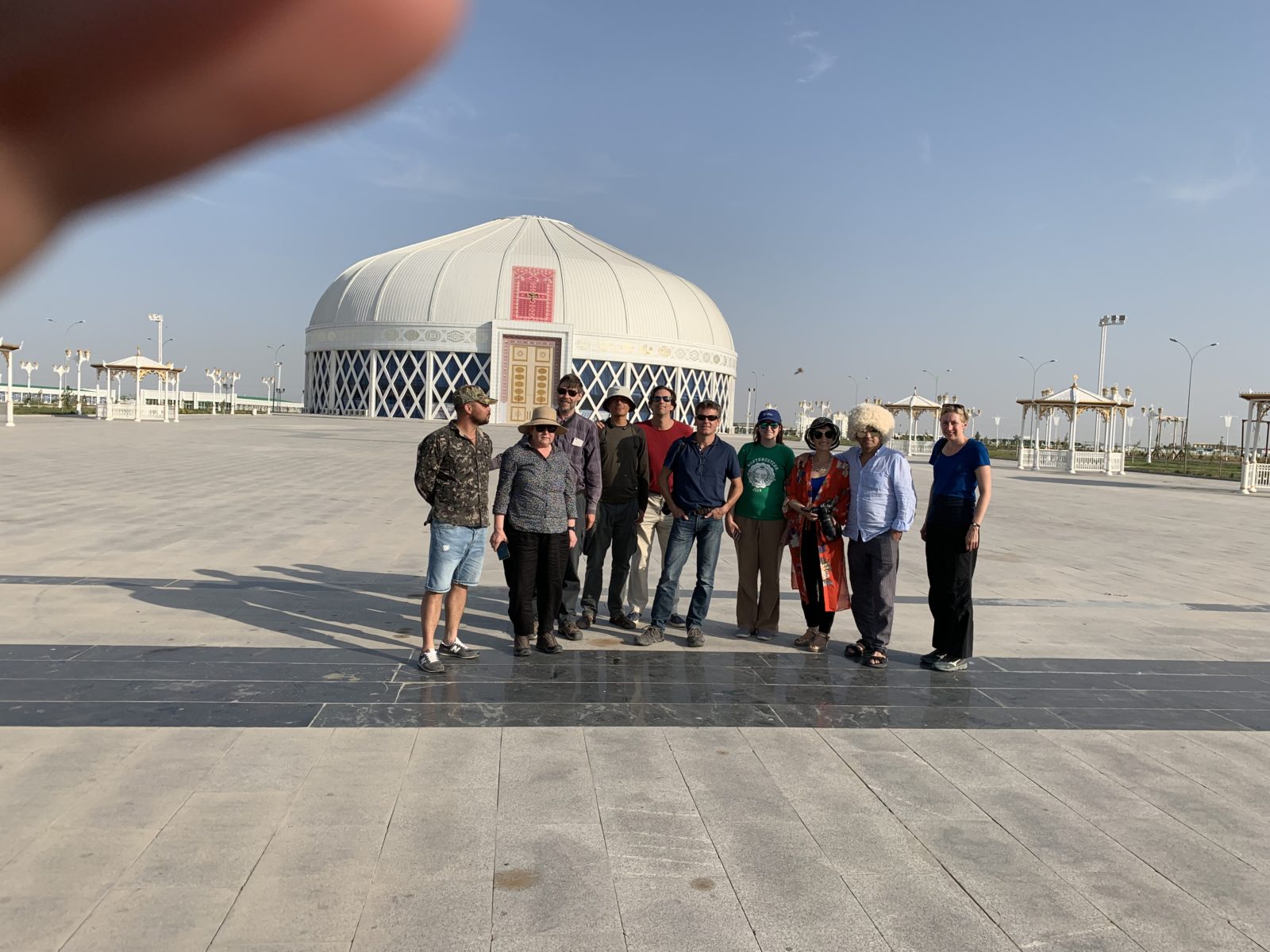 This post is basically going to be everything we did outside of Darvaza and Ashgabat, with a few random reflections on my time in the country.  It’s going to get a bit out of order, because I want to keep my pictures from Ashgabat together.

During our drives across the country, there were a number of checkpoints we had to go through. Tourism is highly restricted in Turkmenistan, and any visitor is required to be part of a tour group. I believe there’s an exception for anyone who can get a five day transit visa, but even so, it was incredibly helpful to have our guide. He warned us when we weren’t allowed to take pictures, explained about the history and culture, and arranged activities and tours based on our interests.

The countryside reminds me a lot of Arizona in the United States. There were less cacti and more camels, but otherwise, it felt like we could be driving to my grandma’s house. There are a lot of stalls on the side of the road selling melons throughout Turkmenistan, and we stopped at one of them on the way out to the gas crater and bought some for dinner.  The woman selling them cut off a few chunks of them and let us try, and it was so delicious. At one point on a drive, our guide played music sung by the president of Turkmenistan.  Apparently, he’s put out several albums. Some of the songs were pretty catchy.

As we left the Darvaza gas crater the next morning, we stopped by a few other craters that had collapsed but were full of mud or water – they weren’t quite as impressive as the one full of fire.  Nevertheless, it seems like maybe that’s not the best area of the desert to drill for natural gas.  Then our guide took us to a semi-nomadic village.  Comparing that with Ashgabat, the difference was rather stark.  Our guide told us that some of these villages don’t have running water.  They still live essentially how they lived prior to the Soviet Union, except they no longer migrate the way they did historically.  Not all the villages we saw were as poor as the one pictured, but it was an interesting look at income inequality in Turkmenistan.

This was especially startling considering our next stop was Ashgabat. I’ll get to that in my next post. From Ashgabat, we took a day trip to ruins at Nisa, which is an ancient fortress. We saw several locals taking wedding pictures from one of the hills, which was understandable – it was absolutely beautiful to walk around as the sun set.

We headed out to Mary, which is the 4th largest city in Turkmenistan. On the way, we stopped off at ruins in Abiverd, which were probably my favorite that we saw. More of it seemed to be standing, and we spent maybe half an hour just wandering through. There were so many pottery shards and other small artifacts throughout the ruins, and it almost felt like living out the fantasy of being an archeologist. I could kneel down and wipe away dirt and find a piece of a glazed pot, and there’s something so thrilling about that.

At one point on our way both to and from Mary, we passed within about 10 miles from the border with Iran.  Turkmenistan is at such an interesting crossroads – it borders both Iran and Afghanistan, and Russia is just on the other side of the Caspian Sea.  Turkmenistan actually petitioned the UN to become formally neutral, which is something they’re very proud of.  There’s a monument in one of their parks, the Arch of Neutrality, that celebrates this.

Mary felt like a city that had developed more naturally than Ashgabat – it had less of that intentionally planned vibe.  There was one section with the types of buildings that we saw in Ashgabat, with a large mosque, a library, and a few other monuments.  We stopped there after dinner one of the days we were there and walked around.  When we went back to the bus, our bus driver had begun talking to two local older ladies, and they ended up talking to us as well.  It was a bit of a challenge but one of the people in our group spoke some basic Russian and they could communicate that way.  They said that the Canadian prime minister (Trudeau) is very attractive and that the UK prime minister (Johnson) looks like he just got out of bed, which sounds accurate on both counts.

We had a day trip from Mary as well.  We went to Merv, which was one of the world’s largest cities at one point.  It was an oasis city in the Silk Road for centuries. So much of it has been destroyed, but we got to walk around the remaining structures.  It’s fascinating to see the scale of what remains.  We literally had to take the bus between the ruins.  Like the other ruins we visited, shards of pottery still littered the ground.  Occasionally we saw them embedded in the walls of the ruins.

At one point, we saw a herd of camels being shepherded into a new area.  I’d never seen a camel outside of a zoo before this trip!

After Merv, part of our group wanted to go to a different archeological site, which is something that was a logistical challenge for our guide because of the controls on tourism. Three people elected to go to Gonur Tepe, which is an important historical place, but it required a drive through the desert that was 2+ hours each way, and the majority of our group wasn’t that interested.  We’d been coming off of a number of extremely long days in Ashgabat and wanted a little free time.  So our guide dropped us off at a restaurant for lunch with the bus driver and went with them.

For the afternoon, we mostly stayed at the hotel, but we were allowed to take a quick trip to the market across the street.  The bus driver watched us from the hotel.  Crossing the street was a bit of an adventure, as there weren’t any crosswalks and drivers have the right of way over pedestrians, but we followed the locals and made it there and back in one piece.  The market was mostly fruit and vegetables and other food products, so it was all locals.  It was pleasant to just be among them after so many places we’d gone that had no Turkmen people.  Our guide told us locals prefer markets since they can haggle on the prices.  After walking around for a bit, we ended up playing cards and drinking while we waited for the rest of our group to get back for dinner.  We played cards the next day on the bus as well and invited our guide to join us.  He told us he had never played cards with women before. He picked up the games quickly and the ride back felt much faster.

Turkmenistan was fascinating for many reasons, a number of which I’ll get into in my next post.  Few countries are so isolated from the rest of the world.  When we would wander through grocery stores, the prices of any imported products were outrageously expensive. The Nutella pictured above is about $32 USD for the larger size.  There was not a single Western chain that I saw throughout the entire country.  No McDonald’s, no Starbucks, nothing.  All of the gas stations were state run.  I had been shocked at the number of Western food chains when I was in China, and here I had the complete opposite reaction.

One of the other aspects I found interesting is the cult of personality surrounding the leader of Turkmenistan. There were a number of billboards and images of him throughout the city, which is something I’ve never seen before in the countries I’ve visited. This billboard above was next to the large mosque in Mary.

My next post will be on Ashgabat, which was absolutely a highlight of this trip for me!