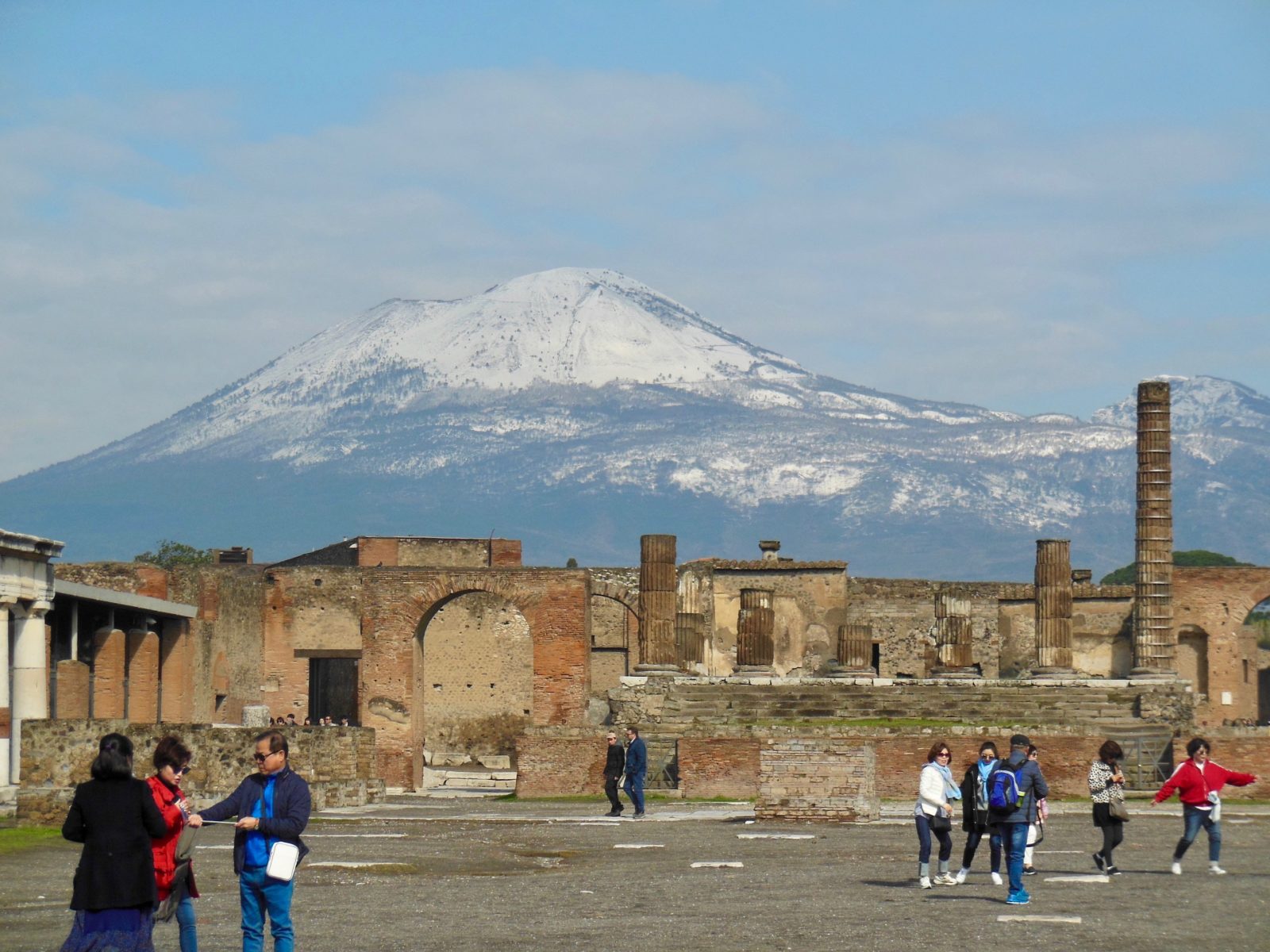 You know how when you’re in school, there are events in history that aren’t that important in the relative scheme of things, but you still learn about them a bunch of times and watch videos and write papers and then you grow up and realize that no one will ever talk about that event again?  Pompeii was one of those for me.  Along with the Titanic sinking, Custer’s Last Stand, pretty much anything I ever learned about dinosaurs….  Anyway.  I still remember sitting in 7th grade social studies and watching a somewhat horrifying reenactment of Pompeii being buried in ash. 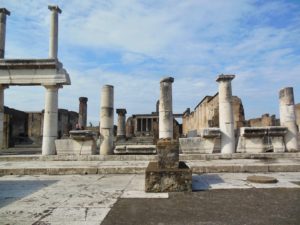 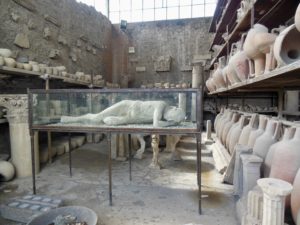 In short, it was high up on my list to go here.  We got up early to take the train from Rome to Naples, which had some amazing views of Mt. Vesuvius on the way.  From there, we switched to a regional train to get to Pompeii.  For some reason, our train compartment had a bunch of French people on it, which was nice because there weren’t any announcements about what stop we were at so I could ask around to see how close we were getting to Pompeii.  After storing our luggage, we headed over to the ruins. 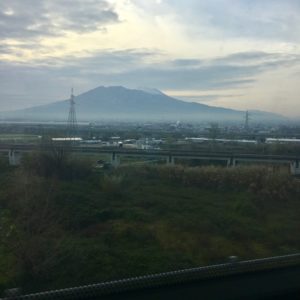 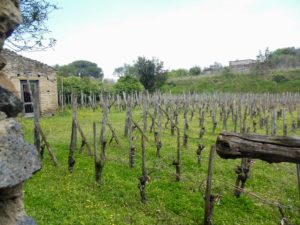 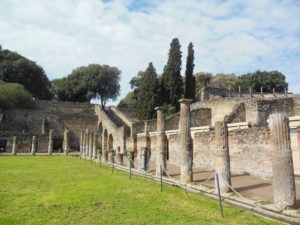 The ruins were much larger than I imagined.  It’s essentially an entire city, and you can find houses, amphitheaters, a colosseum, and marketplaces.  If I’d had more time, I would have loved to go to the Archeological Museum in Naples, because that’s where most of the objects they’ve recovered are.  The ruins at Pompeii are mostly the structures themselves.  I also would have liked to go to Herculaneum, which is supposed to be better preserved.  But.  I loved seeing the ruins at Pompeii, it was so interesting to walk through a town that had once been entirely wiped out by a volcano. 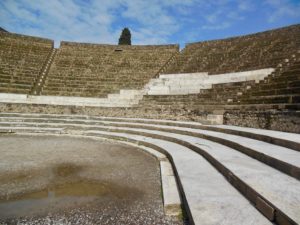 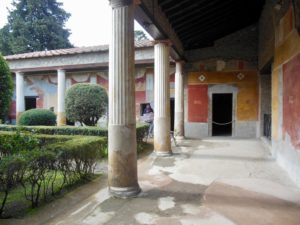 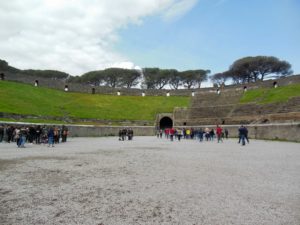 When our feet got tired of walking through the ruins, we headed into Pompeii for pizza.  I tried Google maps to find a good place.  Since everything near the train station was overpriced and touristy, we picked a place that was about a 15 minute walk away and had great reviews.  We set off into Pompeii, walking through a field and down a small side street.  This took us to a market, where I asked a local where the restaurant was.  He pointed it out to us and we ended up in a truly hole-in-the-wall pizza place, Pizzeria La Bella Napoli.  It was family-run place, and it had the best pizza I ate in Italy.  We each ordered a full pizza and watched them make it in front of us, and then sat down in the restaurant.  Our total came out to 6 euro for two large pizzas.  As we ate, the father came out from the back, where he had been making dough, and tried to speak to us in Italian with his son translating.  It was an amazing experience, and one that I will absolutely cherish when I think back on our trip to Italy. 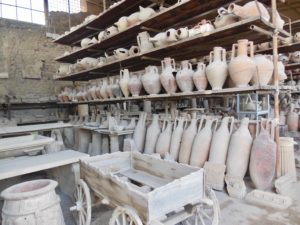 Once we had gorged ourselves on pizza and walked back to the train station, we headed down to Sorrento for the night.  It took us a while to find our hotel.  I had splurged and we had an ocean-room view, which was absolutely stunning.  I would stay there again in a heartbeat.  We tried to walk down to the sea, but there was a gate because it was still off season so we couldn’t actually get all the way down to the coast.  The below pictures were taken from our balcony. 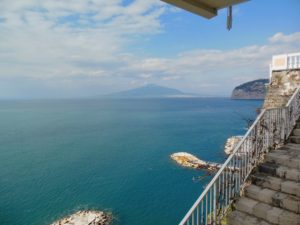 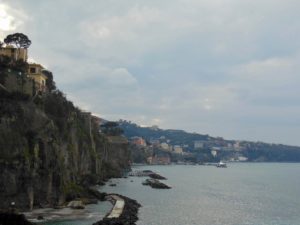 From there we headed into the town of Sorrento.  We went into tiny shops, where they offered us tastings of limoncello, and killed time until our dinner reservation.  It was lovely, and I would have loved to spend a little more time in Sorrento.

I had booked dinner at La Basilica Sorrento, and when we got there, we were one of two tables in the restaurant.  This is what happens in Italy if you go to dinner at what would be a normal time in America.  We both tried tasting menus, so I tried the vegetarian one and Megan got the seafood one.  I’m usually not adventurous with food, but it paid off here. 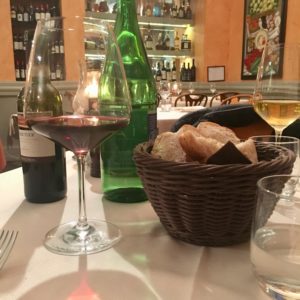 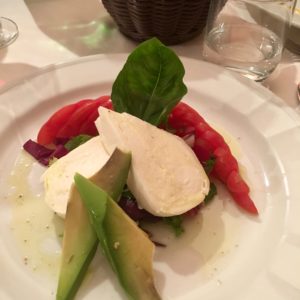 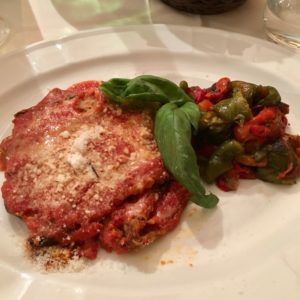 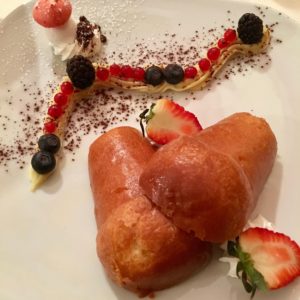 My meal was: a half bottle of red wine, a piece of cheese pizza, a mozzarella and tomato salad, a pesto zucchini pasta course, a parmesan eggplant dish that tasted mostly like cheese, and a very strong rum-soaked cake.  It was delicious, and the owner of the restaurant kept coming out to make sure we liked our food.  The pesto zucchini course was my favorite.  All in all, a great day for eating.  We headed back to Rome the next day to visit the Vatican, but I would love to come back to this area and explore more.