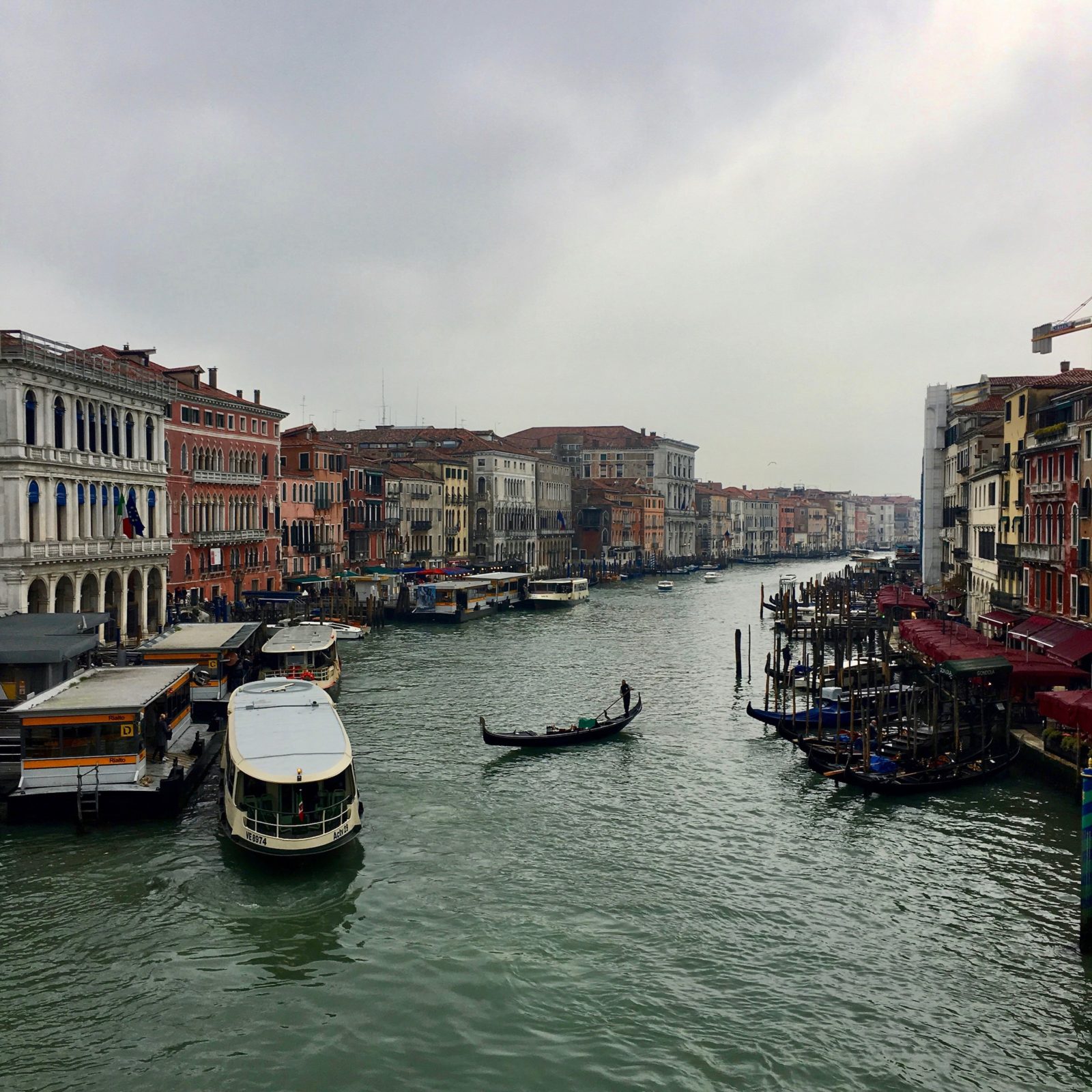 Venice was amazing.  We had a long day of train rides, so we didn’t arrive until the early afternoon.  It was raining as our train pulled into the station, and the light fog gave the city an otherworldly look. 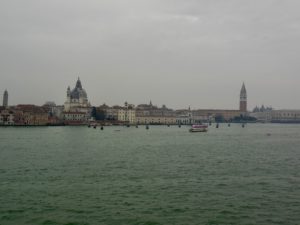 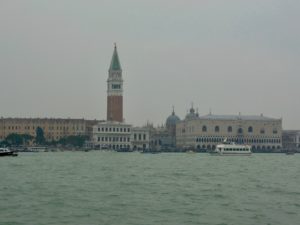 Megan and I stayed in a hostel on Giudecca, which is an island slightly south of Venice.  This meant that we ended up taking a lot of water buses.  Blogs I read seemed to see this as a negative, but I loved seeing Venice by water and that gave me more of a chance to do so.  We got an unlimited transit pass for the three-ish days we were there. 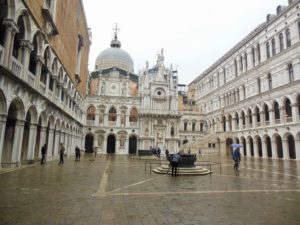 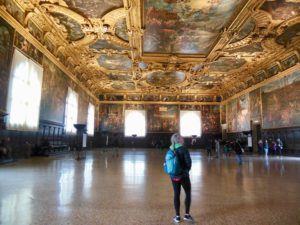 After dropping off our stuff, we headed to St. Mark’s Square.  I wanted to see Doge’s Palace, which is where the leaders of Venice used to live back when Italy was a collection of city states.  We also got to cross over the Bridge of Sighs and see the old prison from that time period. 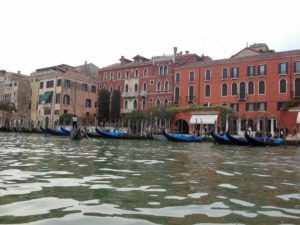 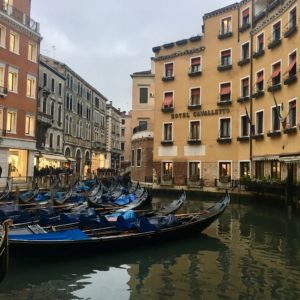 From there, we wandered around Venice for a while in search of the Rialto Bridge.  I’ve never been as lost as I was in Venice.  I have a very good internal compass, so even if I can’t find specifically where I need to be, I can at least figure out the general direction I should be going.  Not so here.  I would be walking in a direction I was convinced was correct, and then I would look at Google Maps to find that I had somehow turned around completely.  It’s a good thing they put signs up to point you toward St. Mark’s Square and the Rialto. 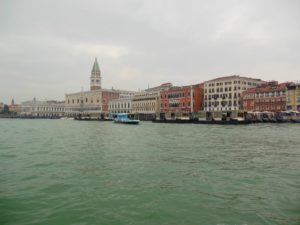 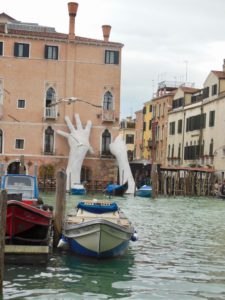 We did eventually find the bridge, and got a good sense of the city in the process.  With a lot of cities, there will be one scenic area, and all the pictures you see come from those same places.  In Venice, everything is the scenic part.  You’ll turn down a side street and find yourself crossing the bridge of the loveliest canal you’ve ever seen, until you see the next one.  It’s amazing.  I can’t imagine why anyone would build a city entirely on water, but I’m glad they did. 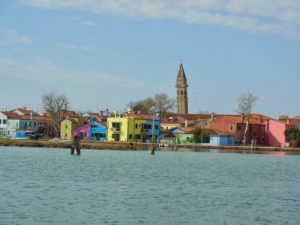 The next day, we headed to Burano, which is north of Venice.  It’s known for tiny colored houses, and you’ve probably seen it on Instagram.  We had lunch reservations at a place I’d found online.  Or at least, I thought we did.  Turns out I’d booked them for the day after.  The restaurant staff were bemused, saying that no one ever comes early for a reservation.  I assumed we were out of luck, but they had an extra table for emergencies and they sat us down there without missing a beat. 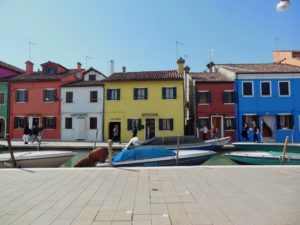 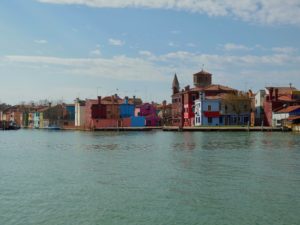 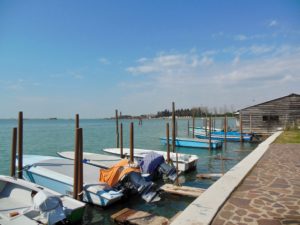 The restaurant was incredible.  Our meal started with bread and prosecco, and when we ordered the house wine, a sommelier came out to pour it for us.  It specialized in seafood, so Megan tried something with clams and I had pasta with red sauce, which was one of the best pasta dishes I’ve ever had.  We both got tiramisu as well.  Again, absolutely delicious.  I had a lot of wonderful meals in Italy, and this was among the best. 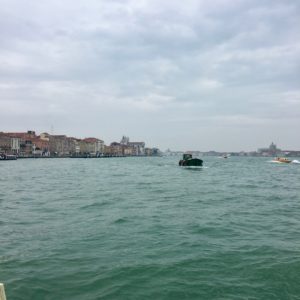 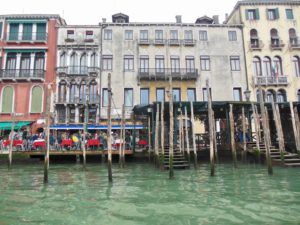 We went back to Venice for the afternoon and decided to take our gondola ride.  I had bought a small group option, where you could show up at any of the available times daily.  The gondola would have up to six people in it, which seemed like a fair trade for about 70% savings on the cost of a gondola ride.  True to Italian fashion, they were not ready at the time they said they would be, and we ended up killing time by visiting a bookstore I had seen on Instagram. 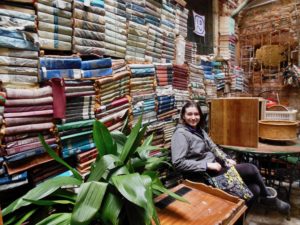 The gondola ride itself was super cool.  Everyone is right, that’s absolutely the best way to see the city.  I wish it had lasted longer! 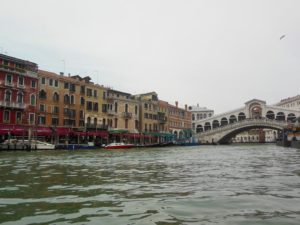 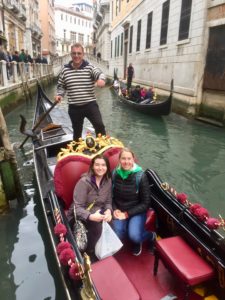 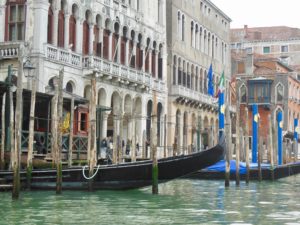 After our gondola ride, we got gelato and headed back to Giudecca to explore that island.  That area is significantly less touristy.  One of my coworkers studied abroad in Venice and said that’s where a lot of students live.  At sunset, it has gorgeous views of St. Mark’s Square. 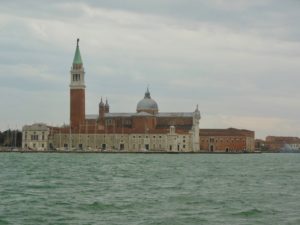 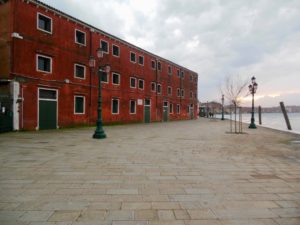 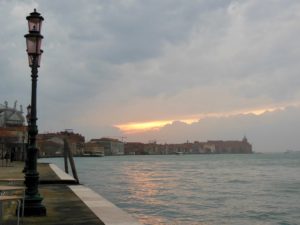 The next morning we spent a bit more time walking through the narrow streets of Venice, and then headed off to the airport for our flight.  We had a long layover in London, although our flight was fairly delayed and we didn’t get to see as much as we’d planned.  Apparently a bus caught fire in front of Stansted and it messed up all the flights.  We did still have time to go to the Shard and have a few cocktails though!  All in all, it was an amazing trip, and I cannot imagine a better end than Venice.