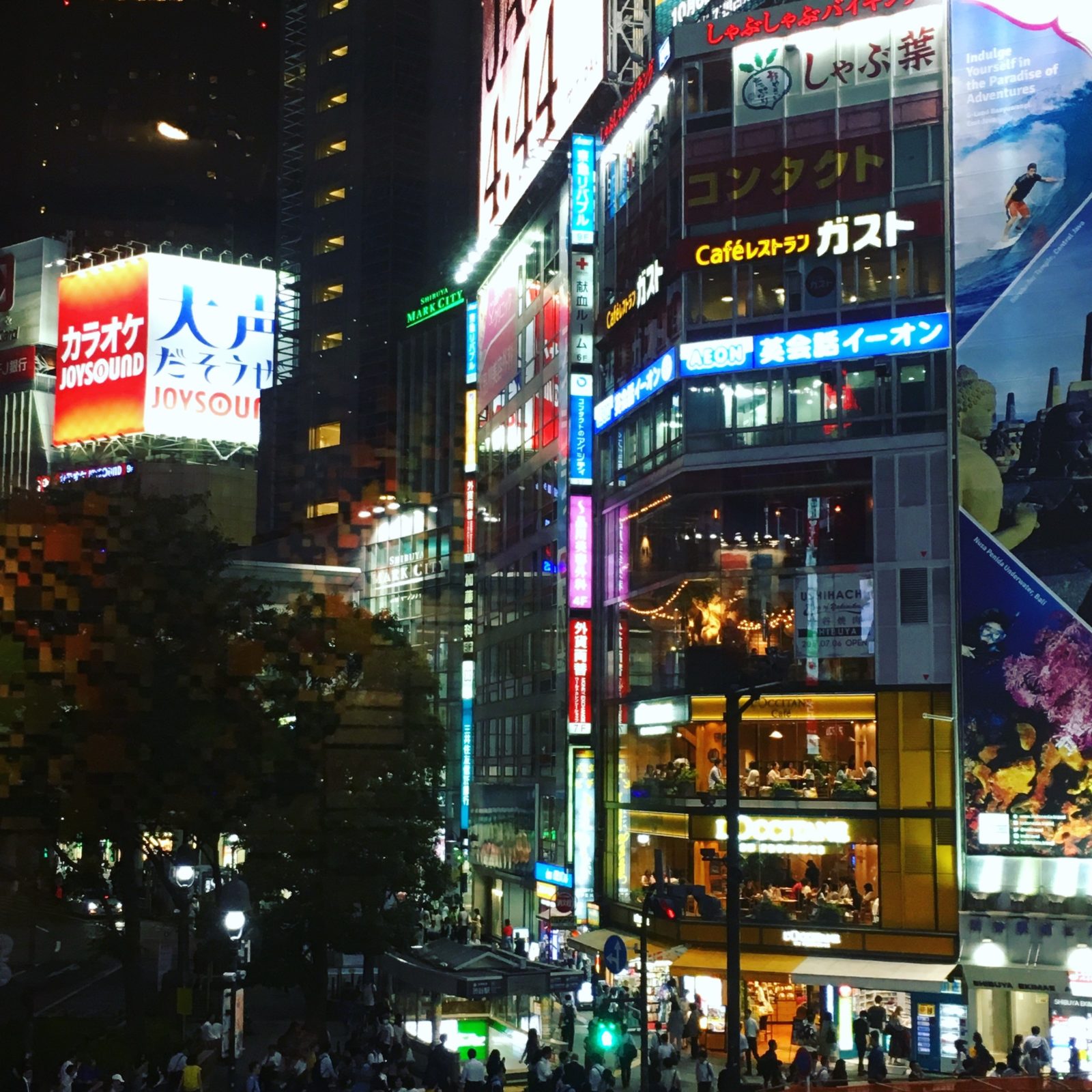 July 23, 2017 admin Leave a comment
My most recent trip was to Japan, where I spent ten amazing days.  I managed to check off everything on my list, and during my trip I walked 194,189 steps, coming out to about 88.3 miles.


Since I went alone, I did a lot of planning, which, of course, went awry before I even left the U.S.  Right off the bat, my flight was delayed.  Apparently San Francisco’s fog problem was grounding planes, and that was supposed to be my connection.  The gate agent switched my flight, but left me with a short connection- I would be landing as my flight to Tokyo would start boarding.  So I went to the gate for my flight to Denver and begged them to let me on the earlier flight.  They told me I could try standby, which I figured was a lost cause.  But miraculously, one man didn’t show, and his seat was economy plus.  I made my Tokyo connection with time to spare and extra legroom. 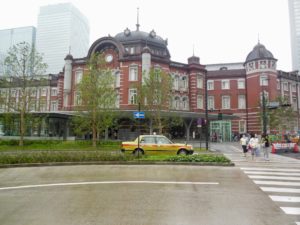 Once I got to Tokyo, everything went pretty smoothly.  That said, I did arrive at Tokyo Station during rush hour, which was quite overwhelming.  The station was packed, and everyone was wearing a white shirt and black bottoms – I felt like a definite outsider.  My hotel was in Ginza, about 15 minutes from the station, and I quickly fell in love with Ginza.  It’s clean, of course, but it’s also quite serene.  That sounds like a weird adjective for a city, but I’ve never been in an area that’s so quiet.  No sirens, no one talking loudly, no honking.  Plus, it’s absolutely stunning. 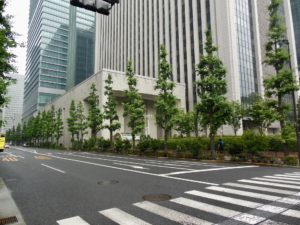 A few notes on my first hotel.  1) the door was magnetic, so the do not disturb sign literally stuck to it.  Not sure how useful this was, but it was cool.  2) the mirror was heated so it didn’t fog up when I took a shower.  3) not only did the toilet have a bidet, but it also made noise when I sat on it and automatically flushed.  Both of which were disconcerting at first.  4) I was provided pajamas, slippers, a toothbrush, and every other conceivable toiletry, which was surprising and much nicer than just getting a single bar of soap. 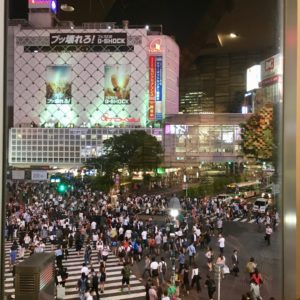 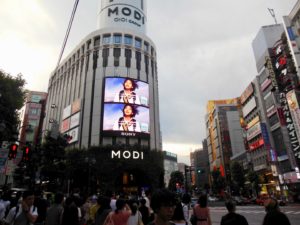 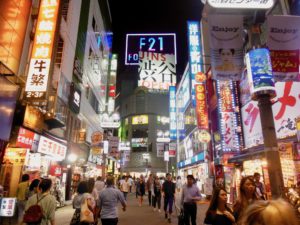 That night, I met up with Romy, who had been working with me in the spring as an intern and was taking a short break before she started full time.  She was in Tokyo for a Japanese language program, which was a lovely coincidence.  We headed to Shibuya, which is known for having the busiest crossing in the world.  I genuinely thought that it was just a crowd of people gathered the first time I saw it.  But no, this madness happens every few minutes.


We wandered through Shibuya for a while, and Romy pointed out some shops that would be good to go back to for souvenirs.  Then we decided to go to karaoke, because it’s a very Japanese thing, and when in Tokyo…. Romy helped me order sake, which was amazing, and then we rocked out to Britney Spears and the soundtrack to Wicked.  Unlike in America, karaoke in Japan involves getting a private room, which makes it infinitely better.  Seriously, if it was like that in the U.S., I would actually go. 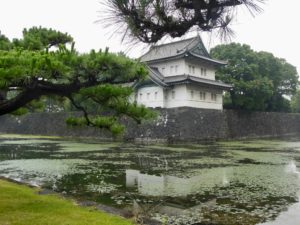 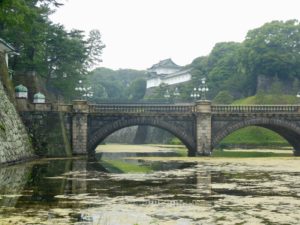 I almost fell asleep on the train back to my hotel, but still managed to get up with time to spare the next morning.  Before meeting with Romy, I walked over to the Imperial Palace.  It’s not far from Tokyo Station, in a park.  The morning I went was foggy, which made it look prettier.  I wandered over to where all the tourists were standing around taking pictures.  The best view of the palace is a little lackluster, since you can’t see much behind the moat and the trees, but I thought the area was nice overall. 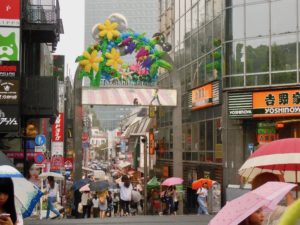 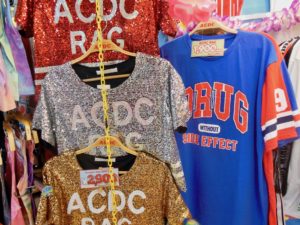 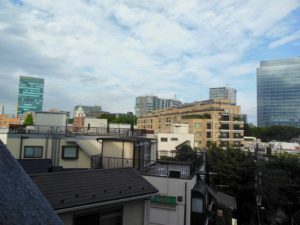 From there, I took the train to meet Romy in Harajuku.  We walked through a packed street, stopping to take pictures at a photo booth place.  Japan had the original snapchat, so you can take pictures and then add filters and makeup and words to them after.  We had a great time trying a few different ones.  The shops were all interesting.  There were crazy t-shirt designs, platform boots that had the Playboy logo on them, and stores that played at least 7 different songs at the same time.  There also were tons of crepe places, where you could get something that was more like an ice cream cone but instead of a cone there was a crepe.  That was delicious. 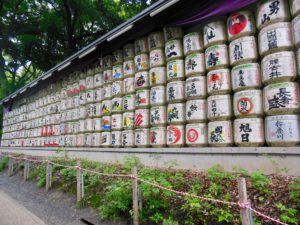 For the afternoon, Romy’s friend met up with us, and the three of us went to Menji Shrine, followed by a park.  They taught me how to distinguish Shinto and Buddhist shrines, Romy danced with some Japanese people for a music video, and we talked about various aspects of Japanese culture.  We ended up back in the same area of Harajuku.  Romy’s friend left, and Romy and I went to an owl café. 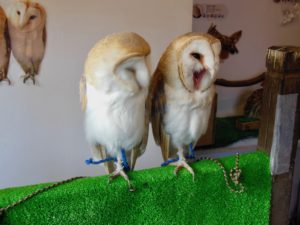 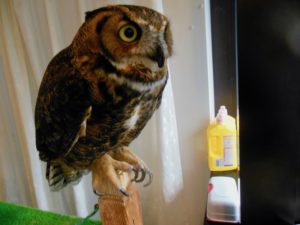 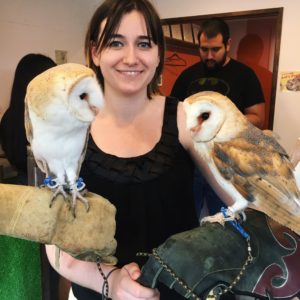 Animal cafés are very Japanese.  The most common is cat cafés, but they also have them for dogs, rabbits, snakes, and goats.  I told Romy it was a hard no on those last two.  Basically, you pay for a drink and time with the animals.  We had almost an hour with the owls.  I had never seen one outside of maybe a zoo, so it was a very cool experience.  They let us hold them, taught us how to touch them respectfully, and told us about their personalities.  They’re beautiful animals. 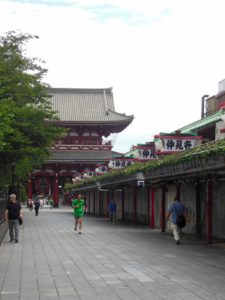 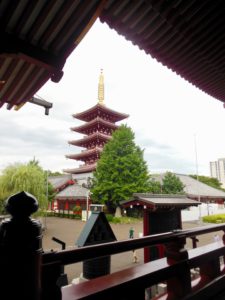 The next day, Romy had to do homework, so I was on my own.  I started by heading to Akibahara, but nothing was open when I arrived so I skipped to the next item on the list, which was the Senso-ji Shrine.  It was quite beautiful, and I liked the neighborhood around it as well.  While there, a man approached me and asked if I would be willing to speak English with him so he could practice, so we got coffee and chatted about Japan and America and culture.  It’s always interesting to hear what other people have to say about your country, and to hear about theirs.  Unsurprisingly, he said the U.S. was dirty, but he is sold on Hawaii.  Sounds about right. 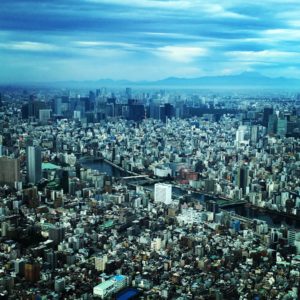 After that, I headed to Tokyo Skytree.  According to Wikipedia, this is the world’s tallest self-supporting tower, at 2,080 feet tall.  Not that it has anything on the Burj Khalifa in Dubai (the actual tallest building, but classified as a “mixed use” building instead), which is 2,717 feet. But I digress.  At the Skytree, you can take an elevator to the 350th floor.  And the 450th, if you want to spend more money, although I did not.  On a clear day, you can see all the way to Mount Fuji.  It’s a spectacular view of the city. 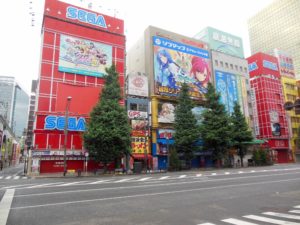 From there I went back to Akibahara.  This initially was an electronics market, but has since moved more into anime and video games, and has a number of figurines and other related items.  It was fun to browse around, although, not being a fan of any of those things, I’m sure I didn’t get as much out of it as someone who regularly watches anime.  I also stopped in a maid café for a snack, which is another uniquely Japanese thing.  And yes, it is exactly what it sounds like, where waitresses are dressed up as maids.  Personally I found it a bit strange, but there’s tons of cafés like that in Akibahara.  When I finished up there, I went back to Shibuya to do some souvenir shopping, and then went back to the hotel to rest and regroup. 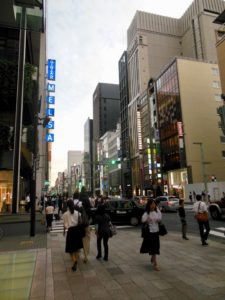 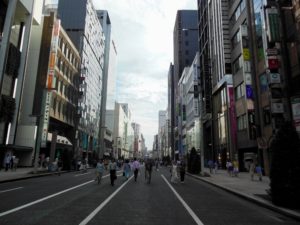 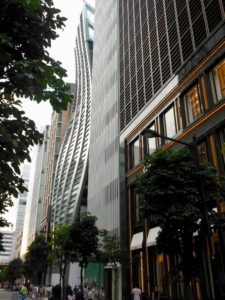 I was initially going to go to Odaiba (another neighborhood that was recommended to me), but when I left the hotel, it turned out all of the streets of Ginza had been blocked off and pedestrianized.  I don’t know if this is just something that happens on Sunday afternoons, or once a month, or whatever, but it was amazing.  There were tables set up in the middle of the street, and people were strolling down the middle of the lane.  I decided to join them, and I spent some time exploring the beautiful shops of Ginza.  There are so many designer shops and department stores, and I loved walking through and seeing what they had.  Ginza also has the best architecture I saw in Tokyo, with buildings that are beautiful and unique.  I absolutely loved the neighborhood, and would say it’s one of my favorites, right up there with Paris’s Latin Quarter.


Still to come in Tokyo: DisneySea!  Which gets its own post, because Disney is emphatically not the real world.