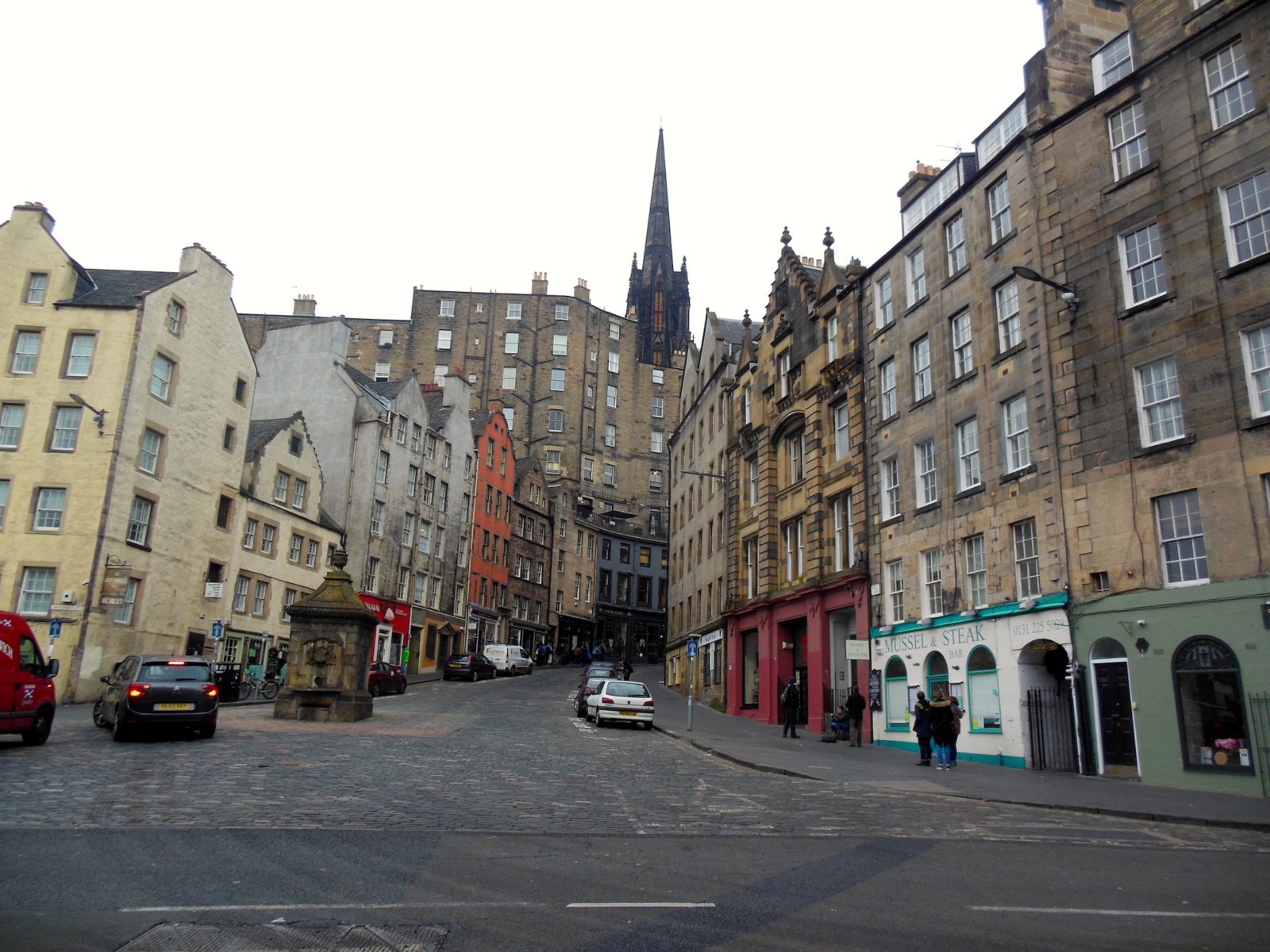 When we landed in Scotland, we took a cab to Kelcy’s apartment, and she had to leave to work on a project and go to class.  I took a good half of the day to catch up on sleep, which allowed me to not feel like I was a zombie, and then I wandered around the University of Aberdeen campus for a while.  It’s quite lovely, especially in the fall with the ivy. 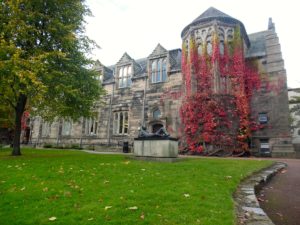 After that, we headed to the beach, walking past a golf course along the way, and I accidentally wandered too close to the water and ended up with some very cold feet. 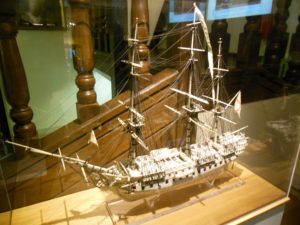 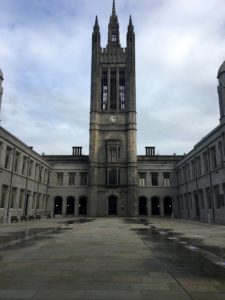 The next morning, we explored Aberdeen!  And by that, I actually mean that Kelcy gave me a tour, because she has Tuesdays off from class.  She took me through the Maritime Museum, where she’s a tour guide, and told me all about the history of Aberdeen.  The city is mostly monochromatic, and the architecture is beautiful but very similar.  A big difference from London, where the modern architecture is placed among the older monuments.  We went through a museum on toys, and walked through a graveyard, and ended our night at Slain’s Castle, which is an excellent Dracula-themed bar where they have cocktails named after each of the deadly sins. 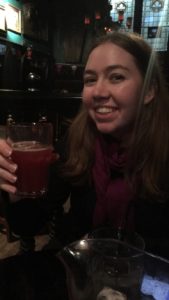 The next morning, Kelcy had to go back to class, and I took a trip to Inverness.  I had signed up to do a Loch Ness cruise, where they drove us from Inverness to the pier, took us on the water for an hour or so, and then gave us some time to explore the castle before dropping us back off in Inverness.  They also took us to a museum exhibit on the history of the Loch Ness Monster sightings, which provided a host of theories on what has caused the images and speculation.  I ended up talking to an American couple who had booked their vacation because of Outlander, and were very excited to see another American who they could commiserate with over the accents and driving on the wrong side of the road.  I also got to walk down to the edge of the water, where I watched a little girl through cookies into the water so she could “feed Nessie.” 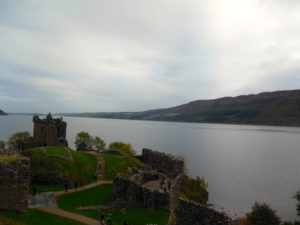 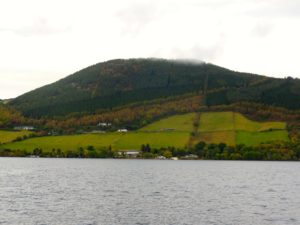 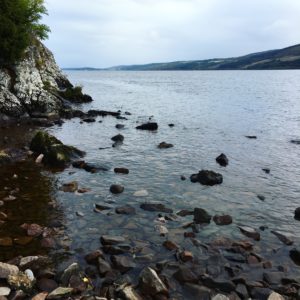 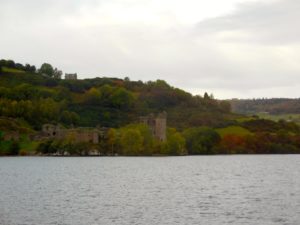 I wish I’d had a little more time to explore at the castle, but otherwise I was very satisfied.  The views going to Loch Ness and from the boat were stunning, and the Loch Ness Monster is a great quirky urban legend.  Our bus driver was hilarious, and it was the perfect day trip.  If you’re in the area, the tour company was Jacobite. 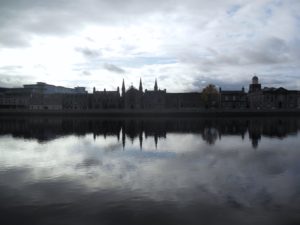 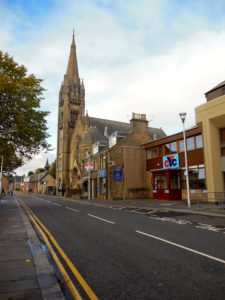 From there, I got to explore the rest of Inverness, which is a lovely town.  When it started to rain, I ducked into a restaurant, where I was the only one- I guess that’s what happens when you try to eat a meal at 3pm.  Anyway, it ended up being the first time in my life that a bartender has given me a free drink, because they were trying to test a new cocktail and wanted me to be a guinea pig.  Also the first time in my life I can remember enjoying a drink with gin. 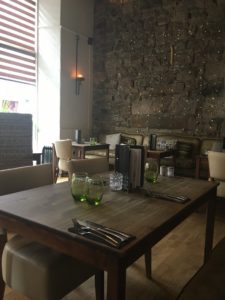 I finished the afternoon with a trip to a bookstore down the street that Kelcy recommended, which was giant and stuffed to the brim with old and beautiful books.  Then I caught the train back, and spent a last night on Kelcy’s couch.

After another quiet morning, we took the afternoon train to Edinburgh.  I finally tried my first Pizza Express, which was honestly way better than I expected for a fast food pizza place, and then we ended up trying the Frankenstein-themed bar.  10/10 would recommend, the drinks were cool and the atmosphere was fun too. 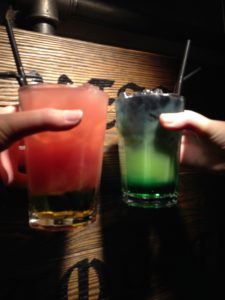 The next day we got to explore.  We started the day at the Elephant Café, famous for being the “birthplace” of Harry Potter because J.K. Rowling used to do her writing there.  Fun fact, that picture above the title is the location that inspired Diagon Alley. 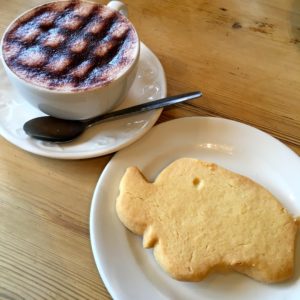 Then we wandered up and down the Royal Mile, took pictures up at the castle, and went on a tour of the area underneath the city, Mary King’s Close.  They described a lot of the history of Edinburgh, how it used to be filthy and people walked through human waste, and how the plague spread rapidly through the city.  Which only underscores how crazy that woman in Outlander is to strongly prefer staying in the past. 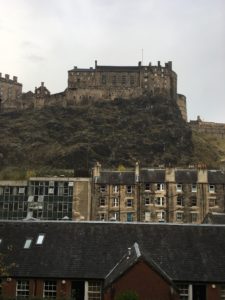 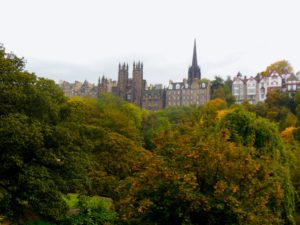 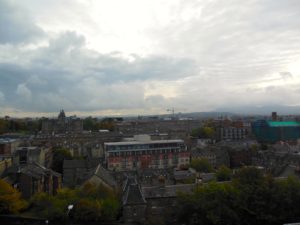 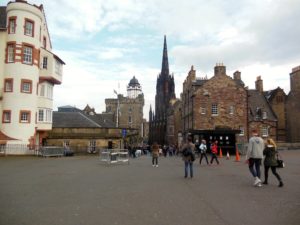 We also went to an art museum, a park, and finished off the evening with a literary pub crawl.  The next day, it was another morning of getting up insanely early followed by a long day of travel.

Edinburgh’s a great city, and I can see why many of my friends have raved about it.  It was fun to visit Kelcy and get a sense of her life in Scotland, and it was nice that we were able to check off several of the experiences on my list while I was there.  I missed being in Europe, and it was nice to be back for a little while.  Especially London, which is one of my favorite cities.  I’m excited to see where my adventures take me next!