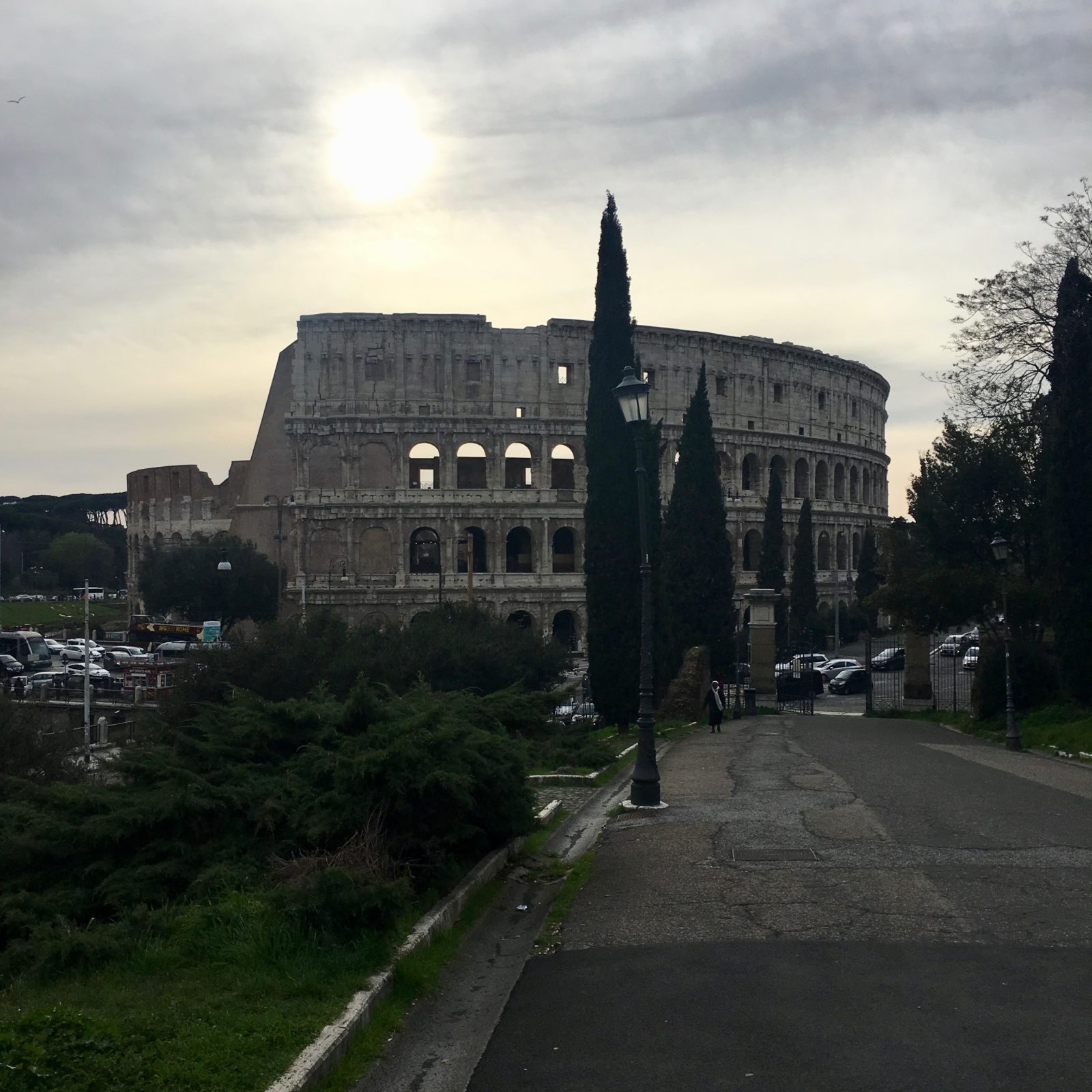 After my night at the IceHotel, I flew down to Stockholm and then took another flight from Stockholm down to Rome.  While flying over the entirety of Europe, I got to see the Alps from the plane, which was a nice bonus.  I met my cousin Megan in the airport, and then we took the train together into the city. 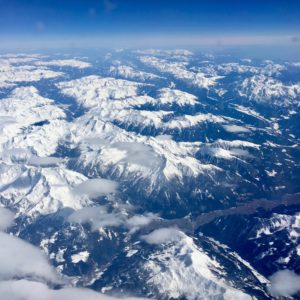 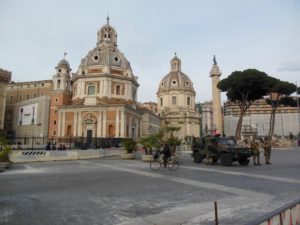 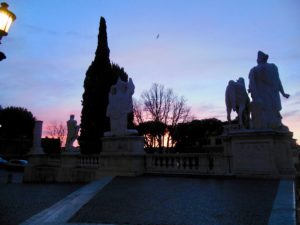 After checking into our hostel, we walked over to go see the Colosseum!  It’s a classic symbol of Rome, and it’s one of the wonders of the world.  It was pretty magnificent to see it in person.  We walked through a park and turned a corner, and it was suddenly there, right at the bottom of the hill.  After marveling and taking a few pictures, we headed over to a wine and cheese bar I had found, Beppe e i suoi formaggi.  We were there at a weird time so it was quiet, and we each drank some wine and tried a wide variety of cheeses.  It was a fairly early night, because both of us had long days on planes and we were getting up early the next day for Pompeii and Sorrento. 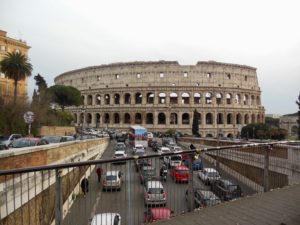 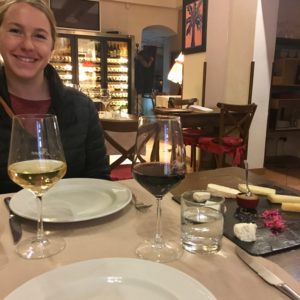 We got back to Rome after our train back from Naples on Saturday.  From there, we headed over to Pizzarium, which was in a lovely area of the city near the Vatican.  It kept showing up on lists of good restaurants in Rome, so I wanted to try the pizza there.  It was delicious, although it wasn’t the best I had in Italy – see my post in Pompeii & Sorrento for that story.  We headed over to check in for our tour of the Vatican, and ended up walking around that area for a while since we were early. 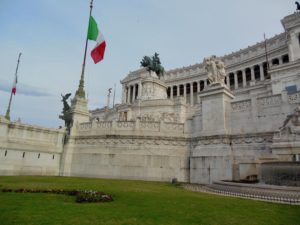 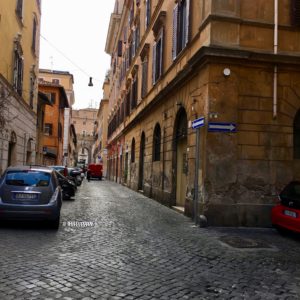 When our tour started, we began by walking down the main road toward St. Peter’s Basilica.  There’s a line on the cobblestones that marks the barrier between Italy and Vatican City, which is technically a separate country.  Our tour guide told us a bit about the history and architecture of Vatican City, and spoke about the semi circle of columns that surrounds the main square.  One of the funniest moments was when she asked a child in our group what that was supposed to represent.  The child loudly said, “A trap!” and our tour guide was horrified, because the answer she was going for was “an embrace.” 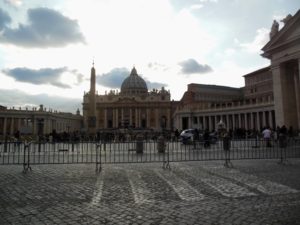 We headed over to the Vatican Museums, which were very busy.  We had to go on the Saturday, because they’re closed on Sundays.  We waited in line for a long time to go through the metal detector, and then our guide took us quickly through the museums.  A lot of it was sculptures and artwork about the history of Christianity.  There were some gorgeous mosaics.  My favorite room was the map room, which had a stunning intricate ceiling and old maps of Italy and Europe along the walls.  From there we went to the Sistine Chapel, which was also beautiful.  They wanted absolute silence here, although their attempts were undercut by the fact that someone kept coming over the loudspeaker and shushing everyone.  I would LOVE to see how much money the Catholic Church actually has. 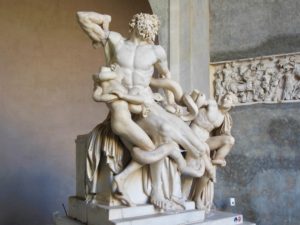 Once we left the Sistine Chapel, we took a shortcut over to St. Peter’s Basilica.  It’s a massive structure, with high ceilings and dramatic columns.  Once we had finished looking around, we headed back to our hostel for the night. 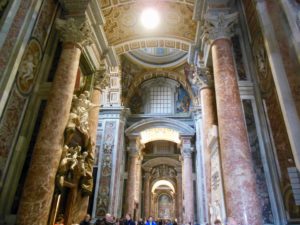 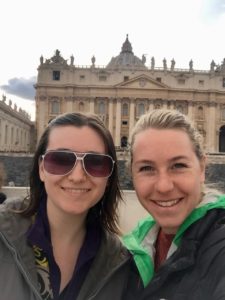 The next morning, we tried a bakery I had found online that was near our hostel.  Pasticceria Regoli, which was delicious.  We ate way too many pastries and then headed down to the Colosseum for our tour of that.  We waited forever in the line for security, and then felt a bit rushed through the Colosseum itself, which was a shame. 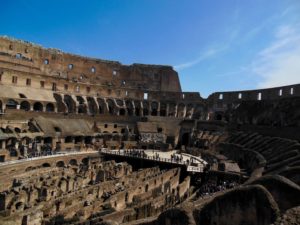 Once we had left, we headed over to the Roman Forum, which is apparently the second largest archeological site in the world (after Pompeii).  It had the ruins of the buildings from Ancient Rome, and our guide pointed out some of the places where people had governed and worshipped.  The best part of the Forum for me was the hill where we had magnificent views of Rome. 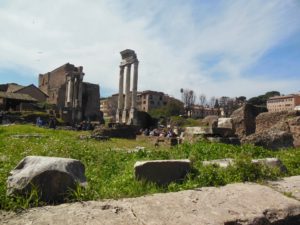 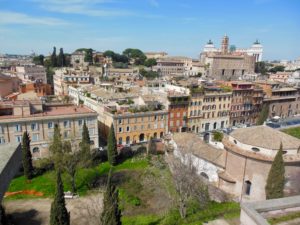 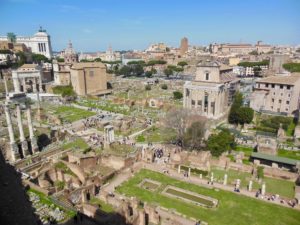 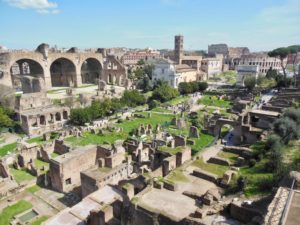 From there, we did a quick tour of the other main sights of Rome.  We started at Piazza Navona, then up to the Pantheon.  Because it was Palm Sunday, the Pantheon was free to enter, which was cool.  It was nice that everything was free, but it meant the crowds were insanely busy for most of our time in Rome.  From there we went to Trevi Fountain, where we both threw in some coins, and we finished out our tour at the Spanish Steps.  That area was swarming with people, so we broke away from the crowd and got some gelato. 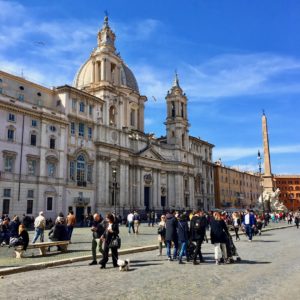 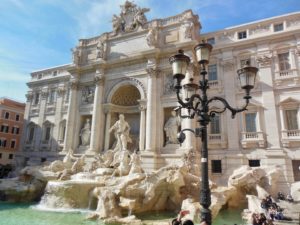 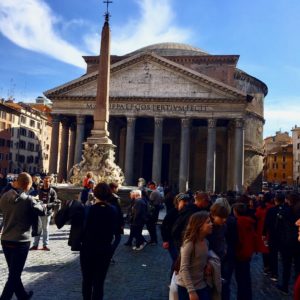 From there, we made our way back to our area and had an early night, because we had another early morning planned.  It was a whirlwind trip to Rome, but I think we managed to see most of the main attractions and try a lot of good food.  Rome wasn’t my favorite of the cities we visited in Italy, but that was mostly the crowds in every major area – maybe if we hadn’t gone the week before Easter, I would have had a much more favorable impression of the city.  That said, it was still amazing to see places I’ve heard about and imagined for years, and it was a great way to start out our trip.