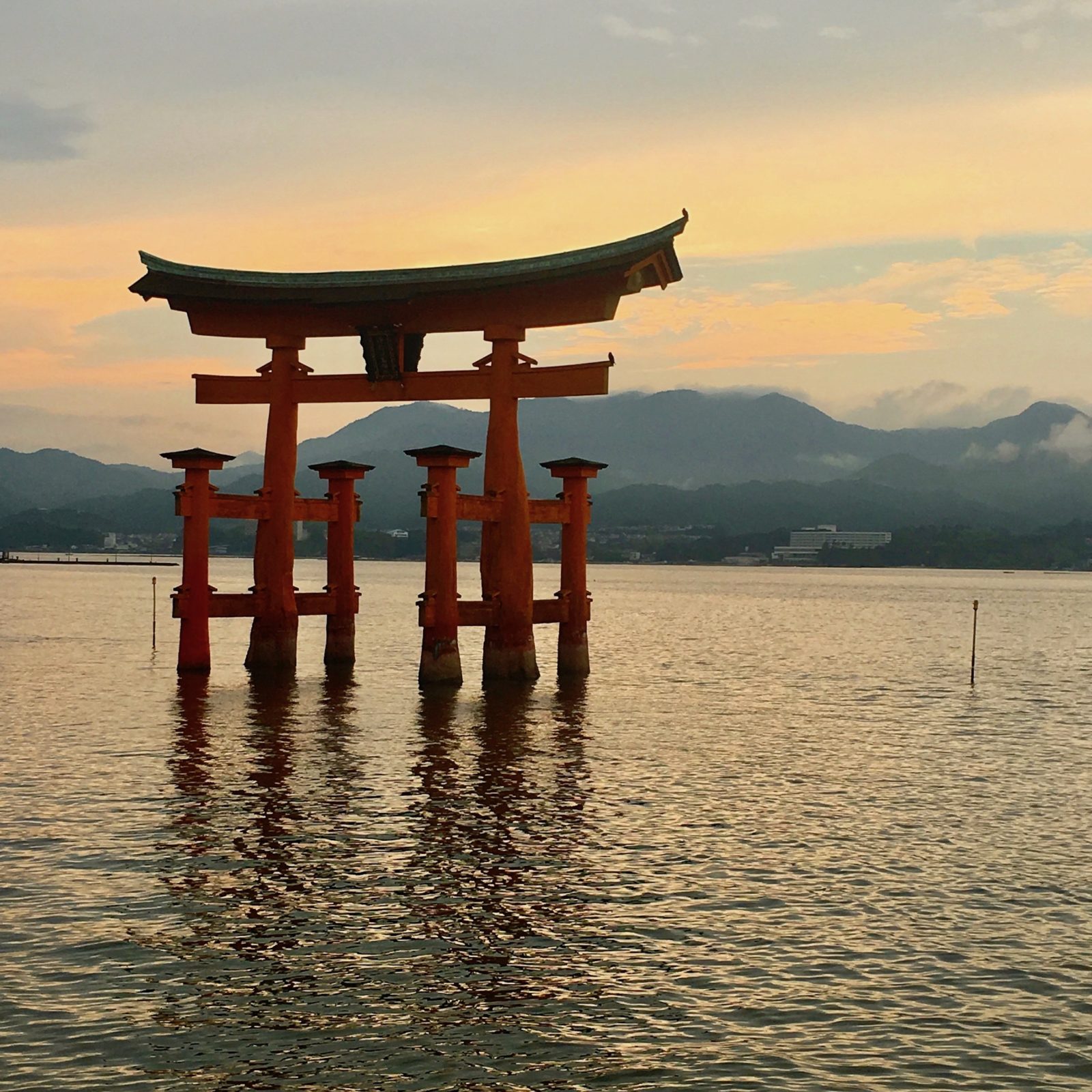 July 25, 2017 admin Leave a comment
Another aspect of Japan is its islands.  There are ones that contain only animals, ones that have stellar modern art, ones that don’t allow women for some mysterious religious reason, ones with volcanoes…. it seems as though there are endless options, and if I go back I’m definitely making that art one a priority.
But this time, I focused on one of the animal ones.  Rabbit Island, to be specific.  Okunoshima.  That was my morning plan.  I had done all my research, figured out the trains and ferries, and mapped it all out. 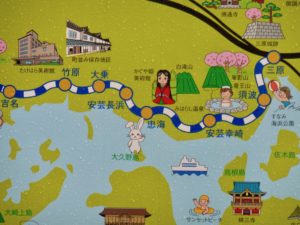 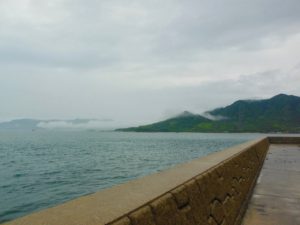 But of course, the universe wasn’t having it.  Remember that tropical storm I mentioned in the last post?  Yeah.  Keep that in mind as I continue with this story. 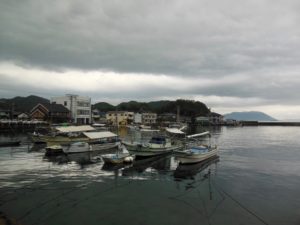 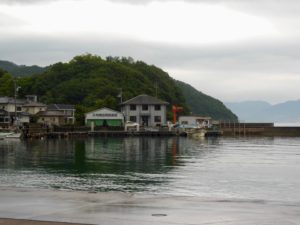 Everything’s going great, I’ve taken the bullet train and the local train to the place where I can catch the ferry.  I had plenty of time to spare, I bought rabbit food, and I even talked to a Belgian family who was also there and speaking French.  We all got on the ferry.  When I got to the island, there were tons of bunnies everywhere.  They definitely get fed well as a tourist attraction.  I sat on a bench and fed some, and then started walking around the island.  I even found some of the ruins of the chemical weapons factory that had once been the main feature of the island. 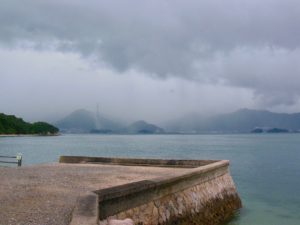 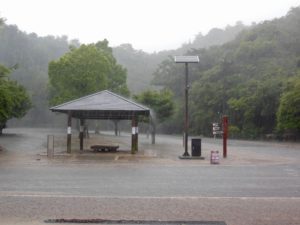 And then it started raining.  And by raining, I mean torrential fucking downpour.  It was like the rain in Jurassic Park, when Nedry gets eaten by the dinosaur that spits acid.  Link for your reference. 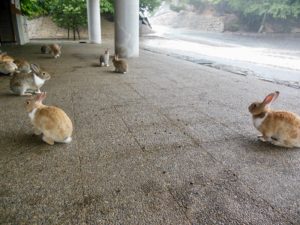 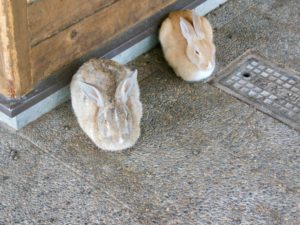 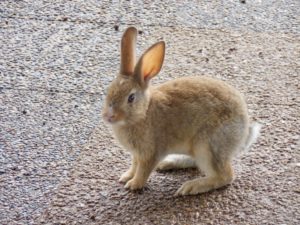 I hoped it would stop, but it was relentless.  Rather than wander the island in that by myself, I turned around and headed back to the area with the ferry.  I sat under one of the awnings, and fed the rabbits.  Which ended up working well.  They were all basically trapped under there with me and they were more than eager to come over and eat treats out of my hand.  And that was how I passed the time until the next ferry came.  It wasn’t exactly the way I had envisioned it, although I did still have fun. 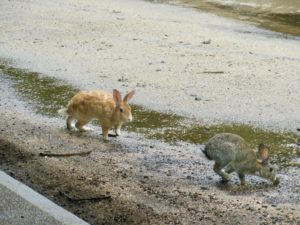 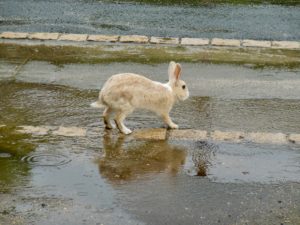 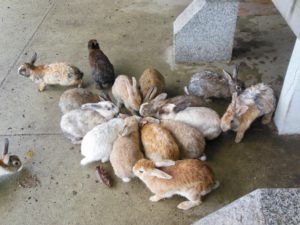 But of course, getting off the island was only the first step.  And when I returned to the train station, it turned out that the local train wasn’t running because of the typhoon rain.  Here, once again, my weird brand of luck rears its head.  The Belgian family had come back on the ferry with me.  Their son spoke Japanese.  He figured out that there was a bus that would take us back to where we could catch the bullet train, and they explained to me how the bus tickets worked and how many stops we had left and such.  They were so nice, and I can’t even express how much I appreciated their help. 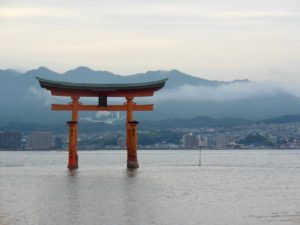 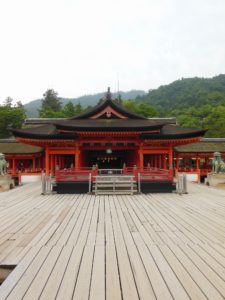 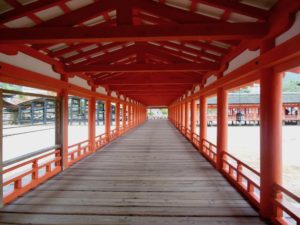 After a bullet train ride back to Hiroshima, a shower, and a few minutes to change into clothes that were not covered in mud, I headed for my afternoon venture, which was another island.  Miyajima.  If you have ever seen pictures of Japan, you have likely seen a picture of Miyajima.  It’s famous for its floating tori, which is a red gate that appears to float on the water in high tide.  Prior to setting it as my afternoon visit, I verified tide and sunset times and made sure they somewhat coincided.  Yes, this is more evidence of my notorious overplanning.  Sorry not sorry. 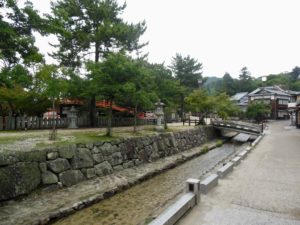 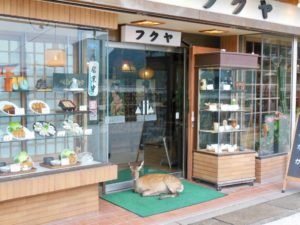 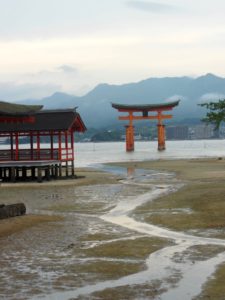 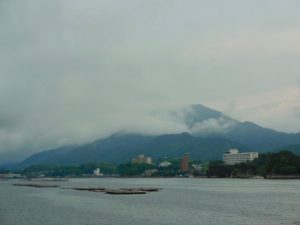 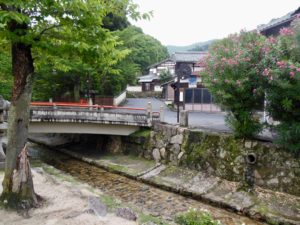 For that, it’s a pretty simple train ride from Hiroshima and a ferry ride.  Miyajima was great, I would absolutely recommend it.  Even the ferry ride in was gorgeous, and the island itself was great as well.  Cute little shops, deer randomly wandering down the streets, the gate with the sunset behind it… everything I could ever want in a tourist destination.  I toured the shrine, which probably would have been cooler had I waited for the proper high tide.  I also watched some deer try to climb up on a statue to go after a girl who they thought had food.  While I have no desire to interact with wild deer, it’s entertaining to watch other people go through it.  And of course, the best part?  It wasn’t raining. 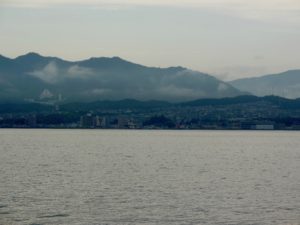 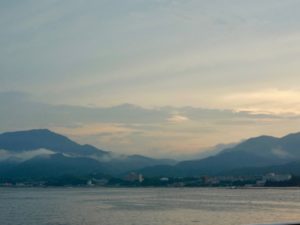 Seriously, though, the whole day was definitely an adventure.  While it might have been nice if Japan wasn’t being hit with a hurricane while I was there, it all worked out for the best, so no complaints.  And with that, I headed east for Kyoto.