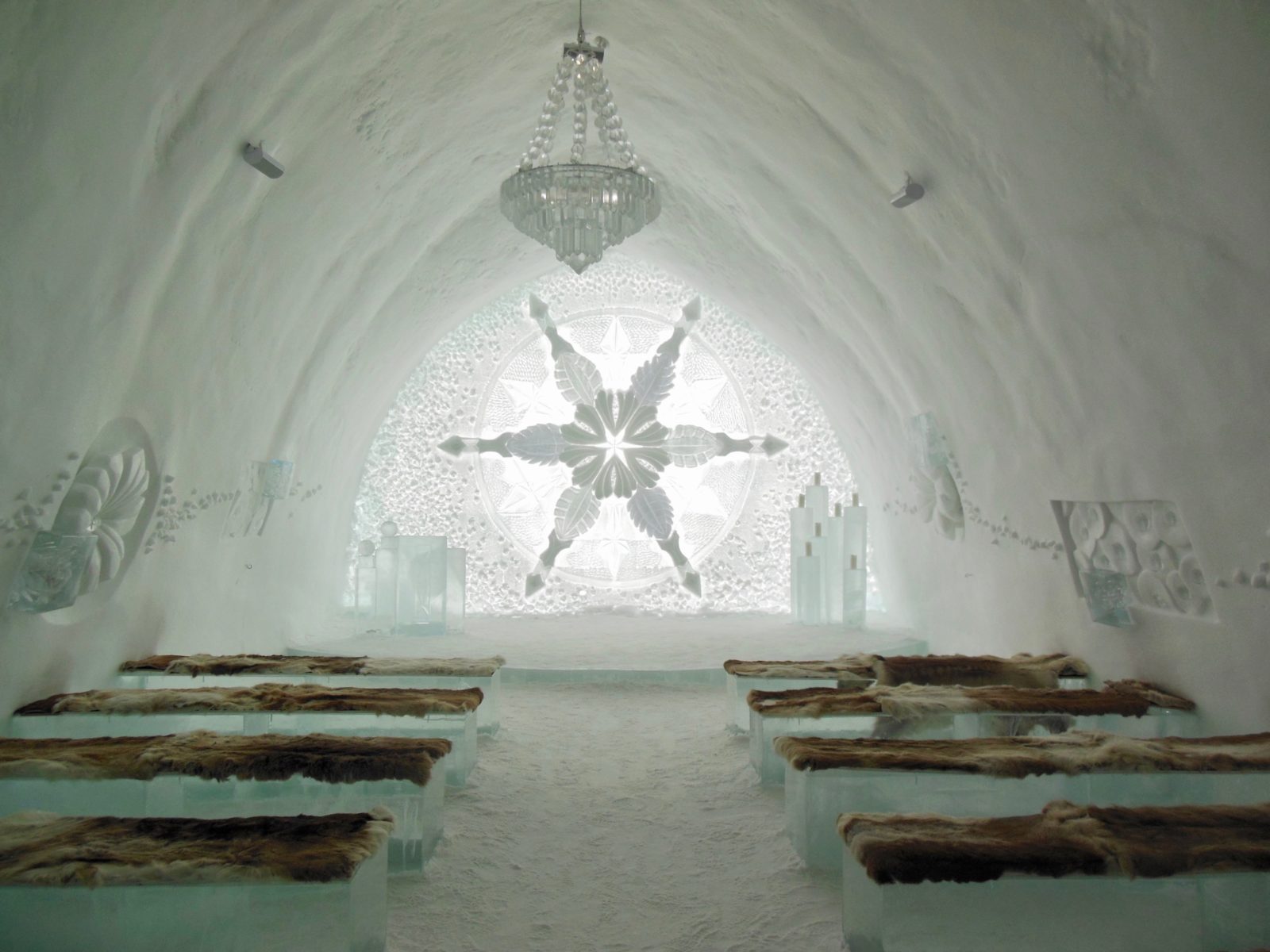 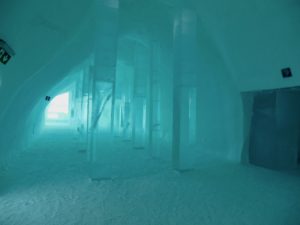 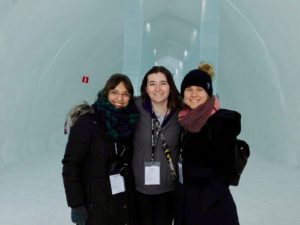 The Icehotel was one of the most amazing experiences I’ve ever had!  We flew up in the morning to stay there for a single night.  The airport is tiny, with one runway surrounded by snow and ice. 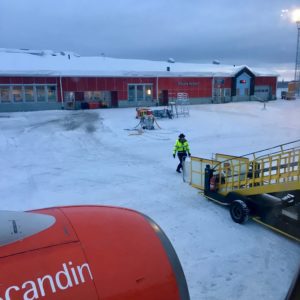 Once we had transferred to the hotel itself, we checked in and started exploring.  We were spending a night in one of the ice rooms, although it’s possible to stay longer and spend nights in warm rooms as well.  They have cabins and a main lodge, as well as two separate ice structures.  During the day, all the ice rooms are open to the public so that everyone can see the incredible snow and ice sculptures. 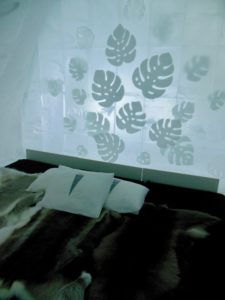 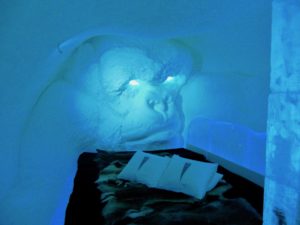 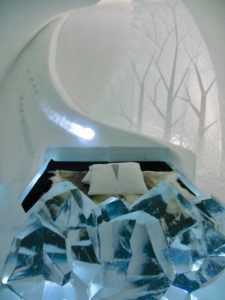 There’s a portion that’s “IceHotel 365,” which is ice rooms inside a building that are available year round and the Ice Bar.  Then there’s another ice structure that’s just available during the winter.  They build it in October or November and then it melts down in April.  For this one, they invite anyone to submit ideas for rooms, regardless of whether they’re artists or have ever worked with snow or ice before.  From the submissions, they pick the best and invite those people up there to design the rooms.  They change every year in what’s essentially a temporary museum of ice, which is so cool!  We stayed in a standard room, not an art room, but I think I’d like to come back and splurge for one of the art ones. 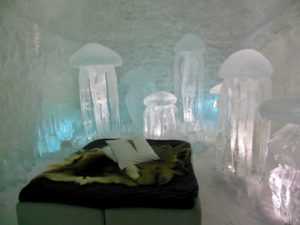 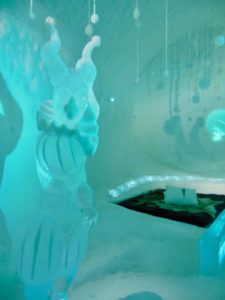 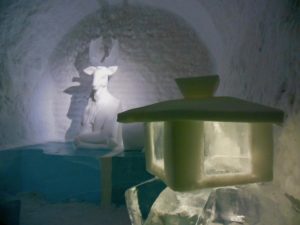 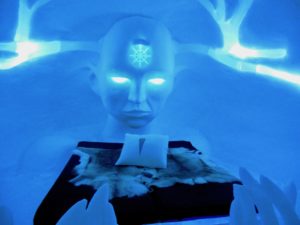 After we were done looking through rooms, we borrowed some snow suits from the hotel so that we could walk around.  They let us borrow boots, mittens, hats, and full body zip up snow suits, which kept us nice and warm.  It wasn’t as cold as I expected – I think the temperatures were around 15 degrees for most of the time we were there. 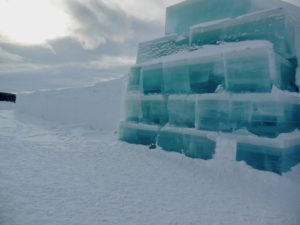 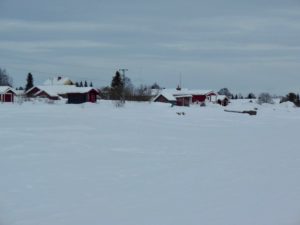 There are tons of activities available up there as well.  We saw people go by on a dog sled, which is still one of my bucket list goals, but there are options to bobsled, take a reindeer-drawn sleigh, ride on horseback, and try to see the Northern Lights.  Although we’d hoped we might see them while we were there, it started snowing shortly after the sun set.  We didn’t do any of the activities since we weren’t there for long, but I’d love to go back and try some of these out. 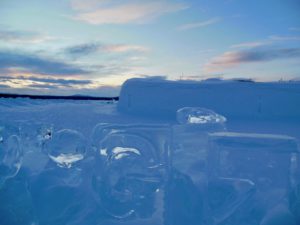 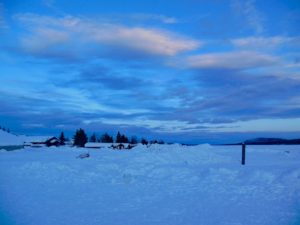 We had a late dinner reservation, so we went to the Ice Bar beforehand for a drink.  It’s been a dream of mine to go to an ice bar for a long time.  Sarah and I tried to go to one in Helsinki, but it had closed down.  It was worth waiting for, though, because I got to drink out of an ice glass and it was amazing.  We talked around our ice table until it was time to go to our dinner reservation. 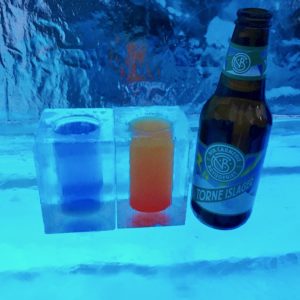 Dinner was at the cheaper of the two options, which was about a 20 minute walk from the hotel itself down the only road in Kiruna.  We initially passed it and had to backtrack, since it was in a section that looked residential.  We had a great meal over candlelight and enjoyed our last night traveling together, since the next morning I had an early flight to Rome and Anna and Laurel were heading to Copenhagen. 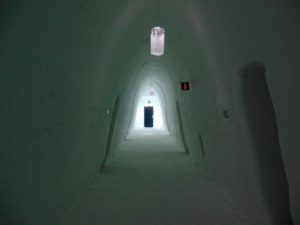 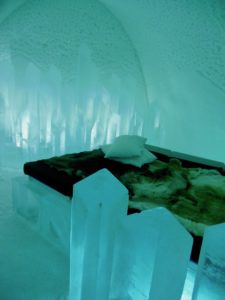 Once dinner was over, we headed back to our room.  They had given us orientation earlier.  We got down to our base layers, locked everything into our locker, and took heavy sleeping bags into our room to zip ourselves up for the night.  In the sleeping bag, I felt pretty toasty.  Because the room itself is so cold, they don’t recommend bringing in electronics, so they do wakeup calls for everyone.  Since my flight was so early, I slept fairly poorly and got anxious, imagining I would miss my flight, so I ended up going back to the lodge earlier than I needed to and getting coffee and breakfast.  I had arranged a transfer back to the airport, and when I got there, I don’t think there were any other passengers there.  I had a flight to Stockholm and then a second flight from Stockholm to Rome, which was a long day of travel!  But it was so worth it to get up to the IceHotel – it was an otherworldly experience, and I want to go back someday.