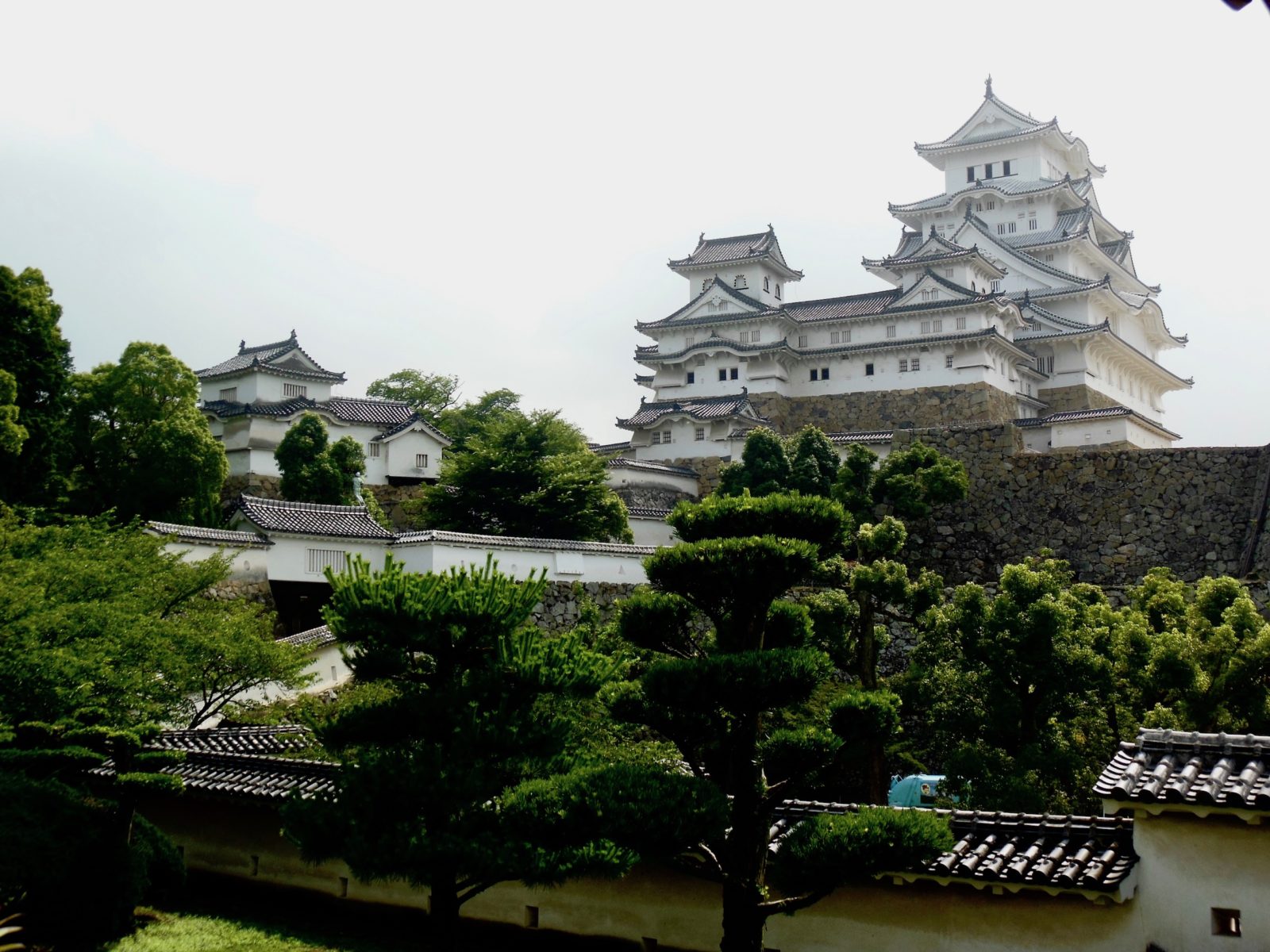 So the theme of this post is day trips from Kyoto.  It won’t quite be in order, but I want to keep the Kyoto pictures together and there are so many of those. 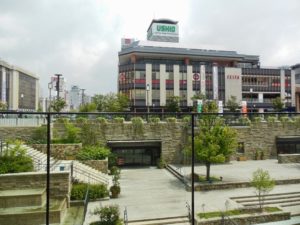 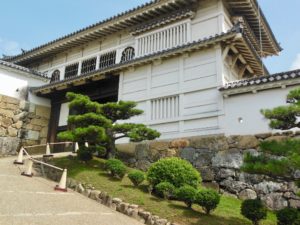 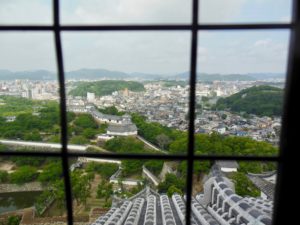 First is Himeji-jo, which is on the map because it has an awesome castle.  After the bombing of WW2, Japan only has 12 original castles left, and this is one of them.  I went on the way between Hiroshima and Kyoto, pausing to store my luggage in a locker in the train station and walking through the town to get to the castle.  According to the online travel guides, this castle gets insanely busy during cherry blossom season, so I guess there are a few advantages to going in the off season. 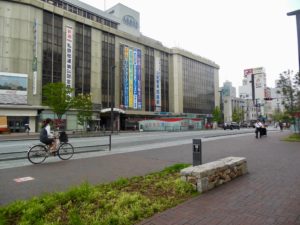 First of all, I would like to note that Himeji-jo has very steep and narrow stairs.  You can climb all the way to the top, which gives lovely views of the surrounding area.  The inside has all been restored, and my favorite part is the samurai sword holders.  I love going in castles and imagining what life was like back then for the rich people.  Obviously it sucked for everyone else, but the royalty was usually doing pretty well.  Himeji-jo is a UNESCO site.  I also had a delicious ice cream waffle sandwich in the town of Himeji, so I have fond memories of it. 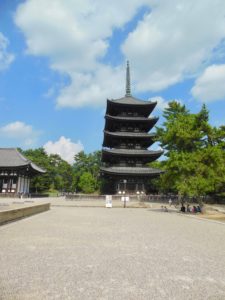 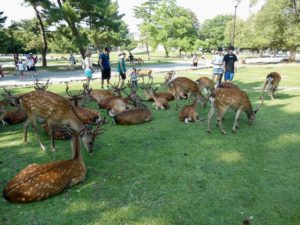 On my second day in Kyoto, I spent the afternoon in Nara.  Nara is mostly known for having a giant Buddha statue and a lot of deer wandering around the city center, and it’s about 40 minutes outside of Kyoto.  When I was there, the giant Buddha statue temple was closed.  But there were a lot of deer.  So I mostly just sat in the main park and watched deer chase around children who had the audacity to try to feed them. 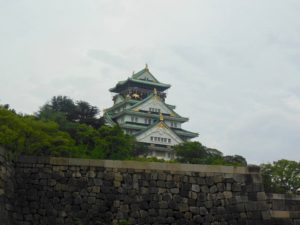 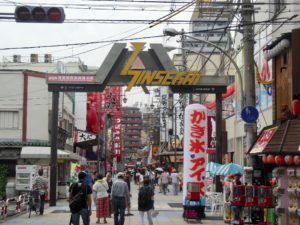 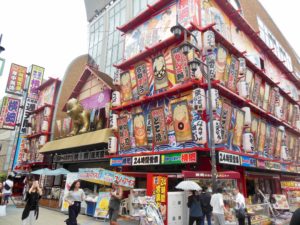 On my last day in Japan, I went to Osaka.  It’s the second largest city, and often people fly to that airport when they’re just planning on going to Kyoto.  I think the most visited part is Universal Studios, but I’ve promised my mom that we’ll go together in Orlando, so I skipped that.  Instead, I started at Osaka castle.  Then I headed through an area in the south, called Shinsekai, which was very loud and busy.  A big departure from everywhere else I saw in Osaka. 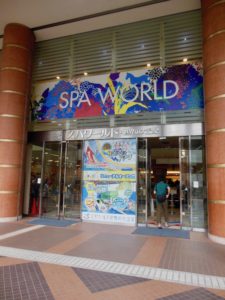 The actual reason I went to that area was to go to Spa World.  A thing that everyone tells you to do in Japan is go to an onsen, which is a hot spring bath.  The only time I got out in the country was to go to islands, and I had other priorities for the most part, but I figured it could be fun to check that out in Osaka.  Why go to a real onsen when you can go to a kitschy fake version?  Anyway.  One of the things that I thought was interesting about the public baths is that you are absolutely not allowed in if you have any tattoos, because that’s a yakuza thing (they’re the Japanese Mafia) and so the internet is filled with stories of foreigners being kicked out of public baths for that reason.  Spa World was fun, and surprisingly relaxing once I got over the awkwardness of being naked around lots of strangers and figuring out what I was supposed to do.  The baths were European-themed, with sections for Greece and Italy and Finland and Spain.  There were saunas, cold baths, hot baths, a waterfall, and even a milk bath.  I’m 100% sure I was the only foreigner there that day.  How’s that for culture? 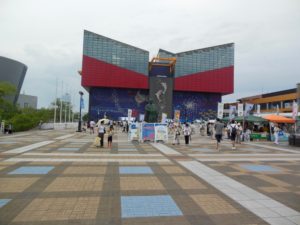 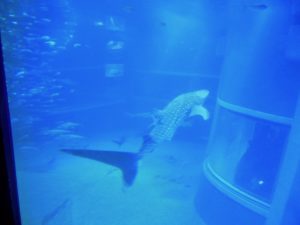 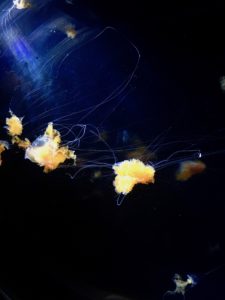 Osaka is also known for its aquarium.  When I was done at Spa World, I headed over there.  The crown jewel is that they have two whale sharks, which I didn’t realize was super impressive until I told a friend and she freaked out about it.  If you’ve ever wondered how large whale sharks are, the answer would be really freaking big.  When I was done at the aquarium, it started to rain again, so that was all I did in Osaka.

Bonus round: the above photo is from the train ride from Kyoto back to the Tokyo airport.  I was reading, and I looked up and Mount Fuji was there, rising above the clouds.  I took a bunch of quick pictures on my phone, and I think this one is the best.  I was very excited I got a good look at it, since it’s iconic.