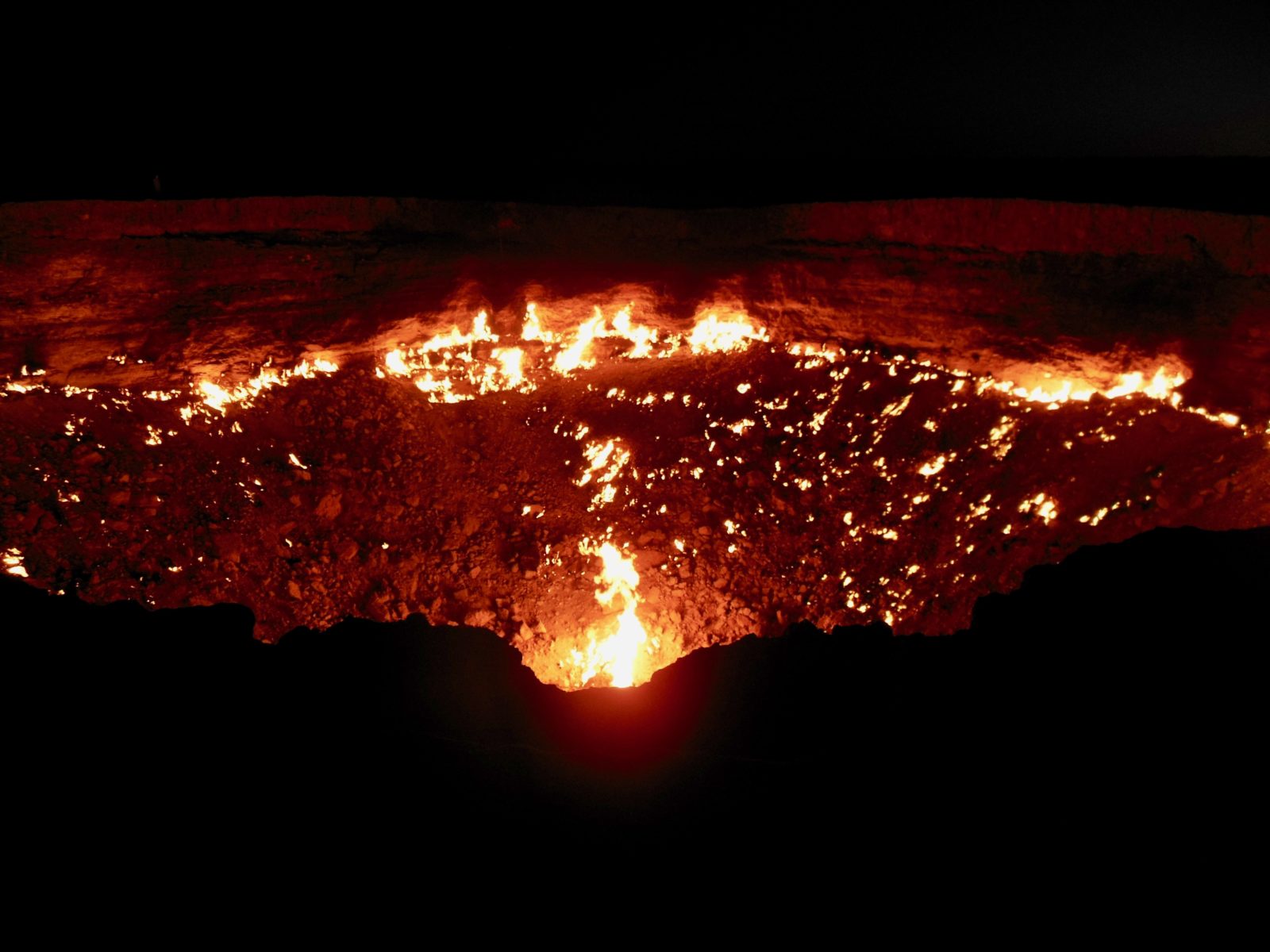 You have no idea how long I’ve wanted to use that title.

From Khiva, we woke up early so that we could cross the border into Turkmenistan! For those of you who know nothing about Turkmenistan, you’re in good company – it’s one of the most closed off and secretive countries on the planet. John Oliver recently did a segment about it, which has helped raise awareness that it exists. The guy at Walgreens who took my passport photos for the visa had seen that segment and was very excited to hear I was going there. Basically, the short version is that it was once a primarily tribal and nomadic region, and then it existed under the Soviet Union for about 70 years, and since 1991, it has been ruled by two consecutive autocrats. It’s also the world’s 4th largest producer of natural gas, so it’s a very rich and very isolated country. For additional context, I would also recommend this podcast about the first ruler post-USSR.

This was actually my first land border crossing. We went through about three different checkpoints to get out of Uzbekistan, and then ended up in no man’s land. Turkmenistan would periodically send what looked like an authentically Soviet minivan to come collect us. Our entire tour group and all our luggage were crammed in and we were driven to the checkpoint. Thankfully our new guide was there to help us navigate the visa on arrival process. It’s one of the most difficult visas to get, apparently. We had our Letters of Invitation already, so we just had to pay the fee and wait in all the lines. The fee, interestingly enough, varies both country to country and day to day. There’s a base rate per country. I think for a US citizen it was $55, which was the same as Canada and Australia. For the UK citizen on our trip, it was $85. Then from there they charge an additional amount, which could be anything. I think mine ended up being around $82. You have to pay in new US dollars. Like, beautiful crisp ones – they actually turned a few of mine away. And after each person paid, they had to sign 18 different receipts (and no, that’s not an exaggeration). Nonetheless, while the process was a bit long, it was essentially painless.

Our first stop within the country was Konye-Urgench. I’ll be quite honest with you, dear internet, I don’t know much about ancient history in Central Asia. So I’m sure some of the historical significance was lost on me. It’s an ancient city, it was on the Silk Road, and it’s a UNESCO site. That’s all I’ve got.

It’s interesting, though, because Turkmenistan takes a very different tack from Uzbekistan. Instead of building their historical sites back up to look like they did in the past, they leave everything more or less as is. Obviously there’s preservation work, as you can see above, but it doesn’t feel as though you’re actually back in the past. Most of it is left in ruin. More on this later in some of the other sites.

Konye-Urgench also had a decent amount of locals, more than we saw at pretty much any other site we visited, and our guide said that it’s still looked at as a holy place, and so people will come to pray there and do rituals. There was one group gathered by a tree, and the tree had a sort of hole in it where there was water. People would dip their hands in the water and touch their faces, and it was said to cure them of headaches and other pains.

Once we had seen all the buildings there, we switched from our bus to some vehicles with four wheel drive and headed off into the desert to go to the Darvaza Crater! This is something I was really looking forward to. It’s also sometimes called the Door to Hell or the Gates of Hell, which is my personal favorite since it sounds more dramatic. The story here is that they were drilling for natural gas out in the desert – and we’re talking WAY in the desert – when there was a collapse where they were drilling. They figured they’d just burn off the excess natural gas that was being released into the atmosphere, and they figured it would burn off within a couple weeks. And that was in 1971. It’s still burning.

The drive out was honestly a bit harrowing. Maybe it was just that I was sitting in the back of the car, but it felt a bit like the Disney Indiana Jones ride, where they’re intentionally trying to make it feel bumpy. But we arrived in one piece! We’d unfortunately missed sunset, so we had dinner before heading over to the crater. Our guide had bought us some vodka and then there were grilled vegetables and meat.

Standing next to the crater was… amazing. Mesmerizing, to watch the flames flicker. Sometimes there would be a gust of wind and the combination of heat and gas would make it feel as though you were standing in an oven. Dumb tourists exist everywhere, because we watched people dangle their feet over the edge while their friends took a picture. It takes a lot of audacity to do that, considering this is an attraction that was literally created by the ground collapsing.

We spent the night camping, which was surprisingly comfortable. I was up very early, and although we may have missed the sunset, I got to spend sunrise at the crater. Watching the sun crest over the horizon was incredible. When it was time for breakfast, I headed back and made friends with the local guard dog, which was an alabai. They’re a Turkmen guard dog, and they actually clip both the ears and the tail so that the dog has less weaknesses if it gets into a fight. The one at our camp was so sweet, and I was sad to leave him when we continued on our tour!