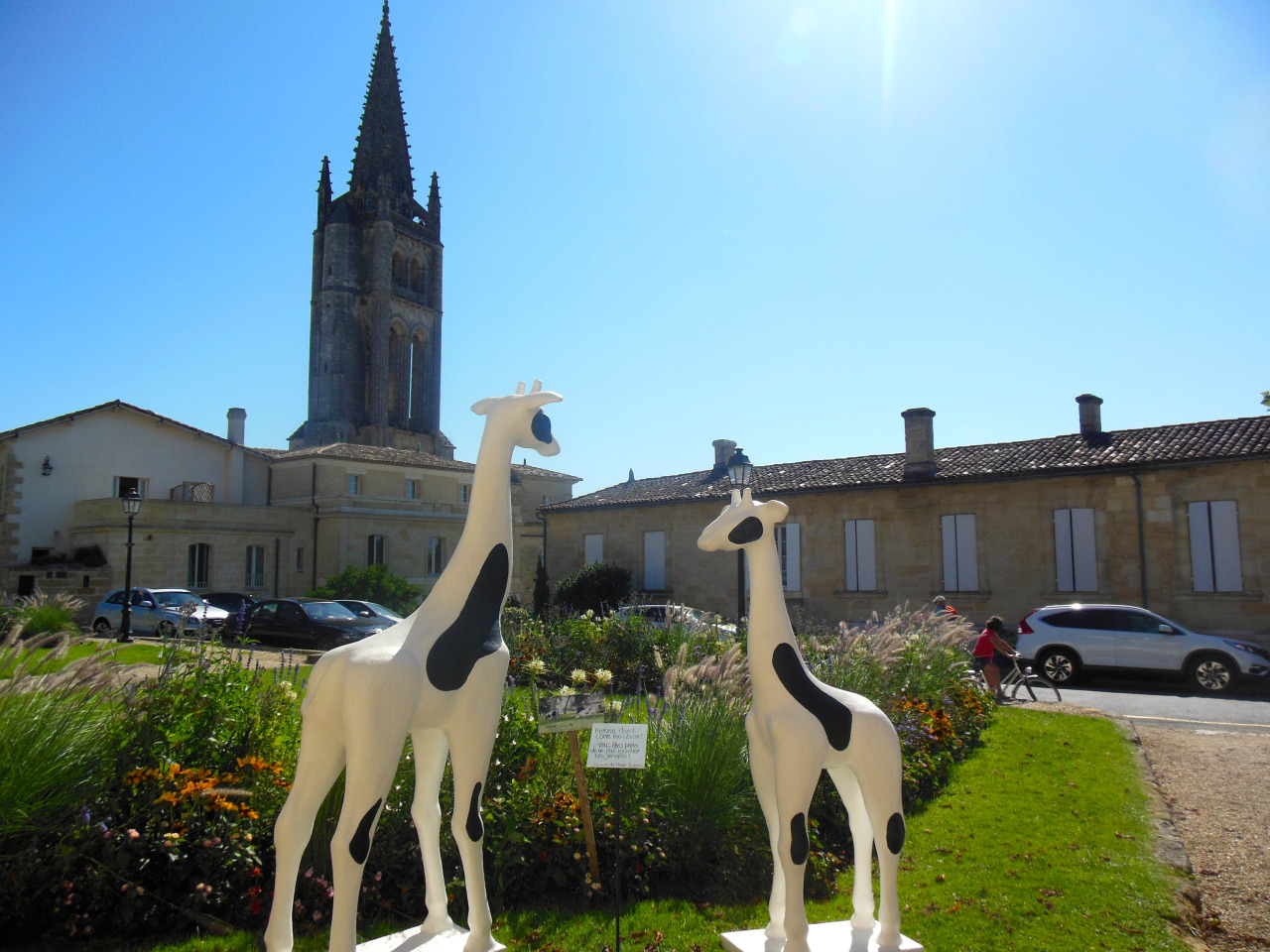 I’ve always imagined Bordeaux as wine country, to the point that I was quite surprised to find myself in an actual city.  I took a walking tour my first day, where our guide explained how their current mayor had made an effort to clean up the city by incentivizing citizens to power wash their homes and the streets in the city center were transformed to be mostly pedestrian.  In fact, Bordeaux actually has the longest pedestrian shopping street in Europe.  I also learned that Bordeaux was under British rule for a while, the main bridge was built because Napoleon got angry about having to move his troops by boat, and whoever built the statues in Bordeaux was very into mythology.  Our guide was great, she brought us some pastries that Bordeaux is known for to try as well.  There were only 4 of us on the tour, so it felt more like someone showing us around the city as opposed to being herded around as part of a tourist group.  After visiting some of the monuments and churches on the tour, I did some exploration on my own.  I did a little shopping, saw a few more monuments, and got a pretty good sense of the city. 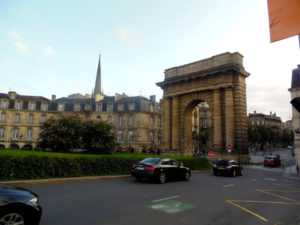 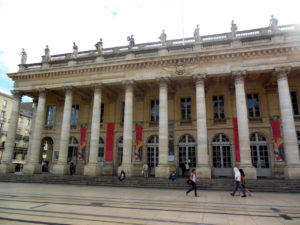 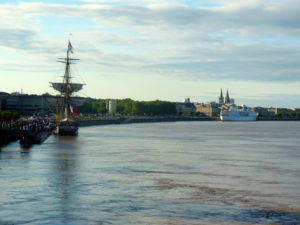 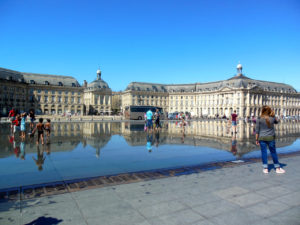 The next day was my bike tour through the vineyards!  This was the real purpose of my trip, and I had actually structured the dates around being able to go on this tour.  So my morning started early, meeting the tour guide at the office.  There were twelve of us in the group, and everyone I talked to was incredibly nice.  We took vans to St. Emilion, where we got our bikes and started off through the vineyards.  The countryside is stunning, and I can’t imagine a better way to see it.  The vines seem to stretch forever.  Here are a few takeaways about the Bordeaux wine region:

1. There are between 7,000 and 8,000 chateaux in the wine region.  This sounds a little fancier than it actually is, because a “chateau” is not defined by the fanciness of your house but by whether the entirety of the wine production is done on your estate, from the growth to the bottling.  Our guide said she was very disappointed at her first chateau because it was only a farm….

2. The naming system is super complicated.  It was explained to me several times and I still am not sure I understand enough to even attempt to explain it here.  Just know that there are a lot of rules and restrictions, including on the types of grapes you grow.  Additionally, each chateau can’t make more than one type of wine per classification, so their better wine is “Chateau [estate name]” and their lower tier wine has the estate name but is “jardin de…” or “plaisir de…” or something to that effect.

3. The best soil for grape growing is actually the least fertile soil.  This is because it forces the roots of the grapes to go very far underground to look for moisture.  Also, grapes for wine production are very different from the kind that you buy at the grocery store.  They want a higher ratio of the skin of the grape, which has more of the flavors they want. 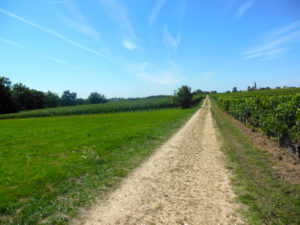 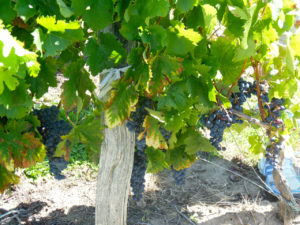 We got to try grapes straight off the vine while learning all of that.  From there, we went to our first chateau of the day.  This one was a family-run place, so we got to tour the bottom floor of where the family lives.  With their library and Picasso collection… I can’t imagine having that level of wealth.  Then we toured the area where they make wine, where they explained how the process worked.  It was a bit of a review, since we’d toured a wine place in Spain (throwback to that time I almost got stuck there x).  This chateau was a much smaller operation, and a lot less industrial than the one I’d seen before.  After the tour, they led us out into the garden, where we had lunch and a tasting outside.  We tried both tiers of their wine, which were both very good!  We also had bread and cheese and ratatouille, so the whole thing felt very French.  It was lovely to sit in the sun with good wine, good conversation, and good food. 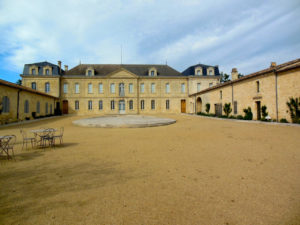 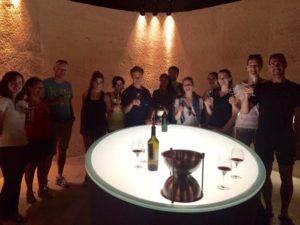 When our lunch was over, we got back on the bikes and headed back to St. Emilion.  Pro tip: if you drink wine before biking, rehydrate!  The bike ride back was a lot more difficult than it needed to be because I didn’t drink enough water.  But I was feeling better by the time we got back in the village.  We took a quick tour around St. Emilion, which is a charming little town that feels as though you’ve gone back in time.  From there, we got back in the vans and were driven to our second chateau of the day.  This one was corporate owned, so it was a bigger operation that practically oozed money… even the elevators had fancy benches in them designed to match the original style of the chateau.  They brought us to a fancy tasting table, which you can see in that photo above and literally lit up with a white background so that you can get the best view of the color of the wine.  They gave us two types as well, and I liked the second one we had better.  Once all of that was done, we were driven back to Bordeaux, where I had a nice quiet night with some pizza.

I spent my last day wandering around a bit more.  I went in a few churches, including Basilique St. Michel.  Fun fact about that one: something happened to all the original stained glass, so they replaced it in the 1960s.  With 1960s style.  Which is pretty great, because it totally doesn’t seem to fit with the church, which is a classic gothic cathedral.  As I’ve probably mentioned before, I think stained glass is really cool so it was fun for me to see a different style.  The St. Michel area of Bordeaux is the older neighborhood, so the streets are narrower and there are plenty of interesting squares with cafés and shops to explore.

All in all, a very nice trip.  I’m hoping to do a day trip in Colmar before my time in Alsace is up, and I’m definitely looking forward to my trip to Paris in a couple weeks!  I’m down to less than three weeks in France, and then it’s back to school and normal life…